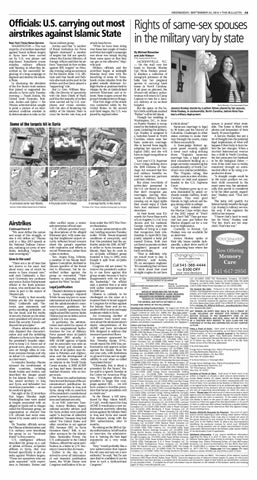 attack Iraqi forces. &quot;What we have been doing of RoyalJordanian Air Force over these last couple of weeks fighters destroyed&quot; a number and what last night&#39;s campaign of targets but did not specify was about was simply buying where; the Emirati Ministry of them some space so that they Foreign Affairs said that the air can get on the offensive,&quot; Mayforce &quot;launched its first strikes ville said. against ISIL targets&quot; on MonMilitary officials said the day evening, using an acronym airstrikes began at midnight

in Syria have been carried out by U.S. war planes and ship-based Tomahawk cruise missiles, military o fficials said &#39;Ibesday, in what they describedas the successful beginning of a long campaign to for the Islamic State. U.S. offidegradeand destroytheIslam- cials said that Saudi and Bahic State. rain also took active part in the In disclosing the identities strikes and that Qatar played a of the five Sunni Arab nations &quot;supporting&quot; role. that joined or supported the But Lt. Gen. William Mayattacks in Syria early Tuesday ville, the director of operations morning — Saudi Arabia, the with the Joint Chiefs of Staff, United Arab Emirates, Bah- said that the majority of strikes rain,Jordan and Qatar — the were carried out by U.S. warObama administration sought planes and cruise missiles, to paint a picture of an inter- with the aim of hindering the national coalition resolute in its determination to take on the

ability of the Islamic State to

crossthe border into Iraq and

By Michael Biesecker and Julie Watson

— On the wall over her bunk in

Monday local time with the

launching of some 40 Toma-

sonogram printouts of the

hawk cruise missiles from the

baby boy her pregnant spouse is carrying back

lamic State targets around the group&#39;s headquarters in Raqqa. That first stage of the attack

was conducted solely by the United States. In the second

and third stages, the U.S. was joined by regional allies.

If all goes as planned, the 28-year-old military policewoman will return to Camp

Lejeune in time for a January delivery at an on-base hospital. Gerry Broome /The Associated Press But the space on the ba- JessicaHuskey stands by a yellow ribbon placed by her spouse, by&#39;s birth certificate marked Nivia Huskey, in Jacksonville, North Carolina, before Nivia Hus&quot;Father&quot; will be left blank. key&#39;s military deployment. Though her wedding in Washington, D.C., to Jessi-

Some ofthetargets hit in Syria

ca Painter Huskey is recognized by the federal government, including the military, Cpl. Huskey is assigned to a battalion based in North

bans same-sex marriage. She is barred from legally adopting her spouse&#39;s biological child, and she will have no legal recognition as aparent.

riage Act ensured that federal military benefits extend to same-sex partners and their children. But about two-thirds of a ctive-duty personnel i n

A commandcenter near Manbij. A financial center in Raqqa. Source: United States Department of Defense

the U.S. are based in states that don&#39;t recognize gay marriages, leaving thousands of military families missing out on legal rights they would enjoy if Uncle Sam had stationed them elsewhere. At their home near Ed-

Continued from A1 &quot;We must define the nature and scope of this struggle, or else it will define us,&quot; Obama said in a May 2013 speech at

U.S. officials provided varying descriptions of the alleged Khorasan plot, with some saying that heightened airport securityreflected broad concern about the group&#39;s expertise

sity, outlining an array of new with explosives and efforts to limits, including &quot;respect for recruit Westerners, rather than state sovereignty.&quot; a plan in motion. Sen. Angus King, I-Maine, Lines in the sand a member of the Senate Intel&quot;There are a lot of lines that ligence Committee, declined to he&#39;s drawn in the sand. Just

discuss specifics of the threat

about every one of which he tied to Khorasan, but he deseems to have crossed now,&quot; scribed strikes against the said Jack Goldsmith, a Har- group as warranted. &quot;Their vard University law professor business is planning strikes and senior Justice Department

official in the Bush adminis-

against the West,&quot; he said.

tration, who attributed the outcome in part to the nature of

threats are his first responsibility,&quot; Goldsmith said. &quot;Between past statements and

international and domestic law and the administration&#39;s coun-

ways to justify operations that

sonville, a short drive north of the sprawling base where her

we would want to stay in

though it split from al-Qaida this year.

Congress did not intend &quot;to

said, a position that is at odds with earlier interpretations of the 2001 law.

cials disputed that characteri- rizations for Use of Military bills designed to address that zation and said the unfolding Forcepassed since al-Qaida&#39;s measure&#39;s perceived flaws. offensive in Syriais inline with September 2001 attacks. A A measure sponsored by the presi dent&#39;s broader objec- 2001 AUMF against al-Qaida Sen. Timothy Kaine, D-Va., tivesto keep U.S. forces out of and its associates was seen as w ouldrepealthe 2002 Iraq auground wars, place more pres- overly broad and obsolete in thorization and approve action sure on foreign allies to con- the faceof al-Qaida&#39;s near-de- against the Islamic State for front overseas threats and rely mise in Pakistan and Afghan- one year only, with limitations on lethal U.S. capabilities only istan and the development of on ground troops and on applias a last resort. new terrorism threats with cability to any other so-called In remarks Tuesday, Obama no relation to the World Trade &quot;associated forces.&quot; on Iraq had been directed at

Saudi Arabia and Jordan, and

Saddam Hussein, who no lon-

described the danger posed ger exists. by the Islamic State — which Yet those two authorizations

&quot;Ultimately, this is about a

precedent for the future,&quot; Kaine said in a speech Tuesday at the Center for American Prog-

ress. &quot;If Congress allows this president to begin this camand Syria and beheaded two paign against ISIL ... we will American journalists — as one its current actions in Iraq and have created a horrible precehe could not ignore. Syria, along with an assertion dent that future presidents will h as seized territory in I r a q

have formed the basis of the administration&#39;s justification for

But eight of the 22 airstrikes

of the president&#39;s constitutional

zens and national security. In an NBC interview Tues-

In the House, a bill introduced by Rep. Adam Schiff, D-Calif., would repeal the Iraq AUMF. It would pass a new authorization narrowly allowing

at targets associated with an alleged al-Qaida cell in Aleppo called the Khorasan group, an organization so obscure that U.S. officials had never men-

the Syria strikes were justified under &quot;a doctrine of collective tioned it by name until a week self-defense,&quot; because Iraq had ago. asked &quot;the United States and By Tuesday, officials across other countries to act against the Obama administration and

U.S. military were describing the group as an &quot;imminent threat&quot; to this country.

Marine shipped out for a war

George Guthrie, enjoy the tour in Afghanistan. benefits of living in a state Currently in Kuwait, Cpl.

are listed as parents on their daughter&#39;s passport and

lawmakers have raised concern about the administration&#39;s

their tidy house outside Jack-

of Los Angeles, Lt. Col. Ivan Acosta and his husband,

remove the president&#39;s authority to use force against this group simply because it had a disagreement with the al-Qaida leadership,&quot; the official

action against the Islamic State

in Iraq and Syria and sunset that measure, along with the 2001 authorization, after 18

ISIL because ISIL i n S y r ia By relying on the 2001 al-Qathreatens them.&quot; ISIL is anida authorization, Schiff said in other acronym for the Islamic an interview, the administraState. Samantha Power, the tion is &quot;putting the best legal

U.S. intelligence officials U.S. ambassador to the United arguments on a very weak describedthe group as a unit Nations, offered the same justi- case.&quot; They &quot;would probably like a of Jabhat al-Nusra, al-Qaida&#39;s fication in a letter to U.N. Seca ffiliate in S y ria, that w a s retary General Ban Ki-moon. new authorization that repeals formed specifically to plot atE arlier in t h e d ay, as i t the old ones and sets out a new tacks against Western targets. strived to cover all internation- authority,&quot; he said, &quot;but I&#39;m not &quot;These are operatives who are al and domestic justification sure they&#39;re confident it can be quite seasoned,&quot; with experi- bases, the White House sent done in such a dysfunctional ence in Pakistan, Yemen and Congress notification of its ac- Congress.&quot;

that &quot;the president had the authority under the 2001 AUMF&quot; to strike in Syria because the Islamic State has its roots in

Columbia. Challenges in other nearly 10 years together. states continue to make their A lawyer, Huskey has put a way through the courts, many lot of thought into the potential ofthem successfully. legal implications of what will A three-judge federal ap- happen if their baby is born bepeals panel recently upheld fore the law changes. When a a lower court ruling striking marriedheterosexual woman down Virginia&#39;s same-sex has a child in North Carolina, marriage ban, a legal prece- the law presumes her husband dent considered binding on a to be the biological fatherjudge currently consideringthe even if the child was in reality constitutionality of North Car- conceived through an extraolina&#39;s very similar prohibition. marital affair or by using a reThe Virginia ruling, like productive donor. &quot;A straight couple could be similar cases in a slew of states, remains on hold and appears in the exact position we are, headed to the U.S. Supreme their child conceived in the Court. exact same way, but automatiThe Huskeys grew up in an cally that parent is considered area dominated by peach or- to bethe other parent, regardchards outside Gaffney, South less,&quot; Huskey said. &quot;That isn&#39;t Carolina. They were good fair.&quot; friends in high school and beThe baby will qualify for gan dating while in college. federal family benefits through Cpl. Huskey enlisted with Cpl. Huskey&#39;s military service, the Marine Corps within days but only if she registers the of the 2012 repeal of &quot;Don&#39;t child as her stepson.

that recognizes their rela-

stressed the involvement of

in 19 states and the District of

might exceed the narrow limits Obama had set on lethal action In particular, the administration had called for repeal of

spouse is posted when stateSame-sex marriage is legal side. The home is filled with

Huskey was not available for

tionship. In April 2013, they an interview. jointly adopted a baby girl Jessica Huskey spoke at

&quot;That is definitely why

&quot;It&#39;s something that we have to think about that most

straight couples do not have

. PUrSUant tO the BarOate Order BS

entities, includinggovernmental units, individuals, partnerships, estates, and trusts who have a claim or potential claim against

remote or contingent such ri@tto payment or equitable remedy mar be,including requests for paYment under section 503(b) (9) of the Bankruptcy Code, MUSTFILE A PROOFOF CLAIM on or before

&#39; The last four digits of Energy Future Holdings Corp.&#39;s tax identification number are 8810. The location of the debtors&#39; service address is 1601 Bryan Street, Dallas, Texas 75201. Dueto the large numberof debtors in these chapter 11 cases, for which joint administration has been granted, a complete list of the debtors and the last four digits of their federal tax identification numbers is not provided herein. A complete list of such information may be obtained on the website of the debtors&#39; claims and noticing