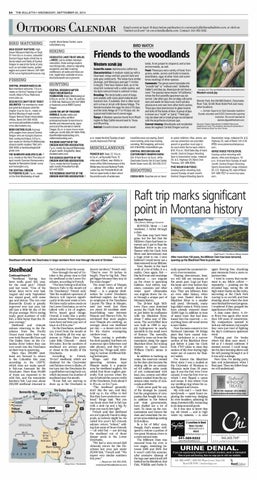 BIRD WATCHING HIGH DESERTRAPTORS: High Desert Museum field trip on Sept. 27 from 8 a.m. to noon; naturalist Damian Fagan leads a field trip to the farmland and fields of Central Oregon to search for birds of prey such as red-tailed hawks, golden eagles and prairie falcons; 541-3824754; www.highdesertmuseum.org.

www.cobc.us. DESCHUTESCHAPTEROFTROUT UNLIMITED:For members to meet and greetand discuss what the chapter is up to; 6 p.m.; meets on the first Monday of each month; Oregon Natural Desert Association offices, Bend; 541-306-4509, communications©deschutestu.org, www.deschutestu.org. BEND CASTING CLUB:A group of fly anglers from around Central Oregon who are trying to improve their casting technique; 6-8 p.m.; club meets on the fourth Wednesday of each month; location TBA; 541306-4509 or bendcastingclub© gmail.com. THE SUNRIVER ANGLERSCLUB:7 p.m.; meets on the third Thursday of eachmonth; Sunriver Homeowners Aquatic 8 Recreation Center; www. sunriveranglers.org. THE CENTRALOREGON FLYFISHERSCLUB:7 p.m.;meets on the third Wednesday of each

Friends to the woodlands Westernscrudjay Scientific name:Aphelocoma californica Characteristics:A medium-sized jay with a blue head, wings andtail; grayish back and pale-gray underparts. Thesexes havesimilar plumage, and thesejays average11 inches in length. Their face mask is dark, as is the stout bill, bordered with a white eyeline, and the light-colored throat is outlined in blue. Breeding:Thebirds build a nest of twigs and rootlets with some plant material and livestock hair, if available, that is often located in a tree or shrub with densefoliage. The female incubates theeggsfor about16 days, and the birds fledge at17 to 19days old. An typical nest holds two to seveneggs. Range:A Western species found from Washington to BajaCalifornia andeast to Texas and Wyoming. Hahitat:Found in lower-elevation wood-

MISCELLANEOUS PIONEERDAY:Sept.27,10 a.m. to 3 p.m., at Reynolds Pond,15 miles east of Bend, nearAlfalfa; in honor of the 50th Anniversary of the Wilderness Act andNational Public Lands Day, the Prineville BLM will host an opportunity to learn about the primitive arts of wilderness

SHOOTING COSSA KIDS:Coaches are on hand

BONNER, Mont. — Last weekend, I rafted through a dam.

The dam may have been gone, but the fact that the Milltown Dam had been removed and I got to float the Blackfoot River to its confluence with the Clark Fork River and downstream was Bulletin file photo

Steelhead will enter the Deschutes in large numbers from now through the end of October.

for the most p art,&quot; French

said last week. &quot;One of the better Julys we&#39;ve ever had.

August and early September has stayed good, with some ups and downs. The run over

Bonneville (Dam) is greatly improved over last year, but still just a little bit shy of the

salmon returning to the De-

on their way to spawning. More than 280,000 steelhead are forecast toreturn

to the Columbia this year, t he

decent numbers,&quot; French said. Now through the end of Oc- &quot;They&#39;re over 30 inches in tober is the prime time to fish length. They&#39;re big fish. They for steeihead in the Lower De- get bigger because they stay in schutes, according to French. the ocean longer.&quot; &quot;The best fishing will still be The small town of Maupin Sherars Falls to the mouth (of — about 90 miles north of the Deschutes),&quot; French said. Bend — is a popular desti&quot;But the numbers upstream of nation for Lower Deschutes Sherars will improve signifi- steelheadanglers.Joe Ringo, cantly in the next week or two. an employee at the Deschutes We have really active creels on Canyon FlyShop in Maupin, the Lower Deschutes, so we&#39;ve said last week that there talked with a iot of anglers. are about 20 excellent steelWe&#39;ve heard good things. head-fishing runs between Overall, it looks like a pretty Maupin and Sherars Falls. He decentseason.Water tempera- estimated that most angiers tureshave not been any sortof near Maupinare catching, on issue at all this year.&quot; average, about one steelhead On the Deschutes, steelhead per day — a decent catch rate can travel from the mouth at for the elusive oceangoing the Columbia ail the way up- rainbow trout. &quot;Spey casting is probably stream to Pelton Dam near Lake Billy Chinook — about the most popular, but there are 100 miles. But the numbers of numerous spin fishermen and steeihead are always great- side planers, and they&#39;re ali er closer to the mouth of the having fun,&quot; Ringo said, referDeschutes. ring to various steelhead-fishAccording t o Fre n ch, ing techniques. &quot;B-run&quot; steeihead, which are Ringo said t ha t t h r ee destined for the Clearwater s pawning s t reams n e ar and Salmon rivers in Idaho, of- Maupin make it a popular ten turn into the Deschutes for areaforsteelhead anglers.He a spellbefore turningback out, added that those angiers genwhich increases the number of erally find success when the steeihead near the mouth. sun is behind the canyon walls &quot;B-run fish are starting to of the Deschutes, from about 6 show up in the Deschutes in to 10 a.m., or 4 to 7 p.m. &quot;The steelhead generally don&#39;t like the sun, and they The DallesDam the Columbia from the ocean.

which does not make specific fish-run forecasts for the Deschutes. More than 90,000

of those are expected to be wild fish, and the remainder hatchery fish. Last year, about

hold up in the riffles to feei

are not typically found in deep pools, as salmon might be. He called this year&#39;s fall chinook salmon return &quot;robust,&quot; adding that some of those chinook

like they have protection overhead,&quot; Ringo said. &quot;But you with a sink tip and a big fly than you can in low light.&quot;

a huge event to me. I once After more than100 years, the Milltown Dam has been removed, believed I would never see a opening up the Blackfoot River to public use. dam removed in my lifetime. Now, thanks to the hard

work of a iot of folks, it is a reality. Once again, fishlike bull trout and westslope cutthroat — can migrate up the rivers to spawning habitats. And rafters, kay-

of Bonner. The sawmills,

piers that have caused trou-

ers will still see remnants of

pacious time. I tried to convey that excite-

ment to my fellow raftersrepeatedly — pointing out the akers, canoeists and other a child&#39;s carelessly discarded stranded logs, noting the old water s port a f i cionados toys. They are leftovers from high water marks on therocks, can migrate down the riv- an even older history, when marveling at the Clark Fork er through a unique part of logs were floated down the roaring in on our left, and then Montana history. Blackfoot River to a smaller shouting about where the dam The 28-foot high Mill- mill pond. Obviously, many onceblocked forward progress. town Dam once stretched logs didn&#39;t make it. Work crews I wondered if they grasped the across the Clark Fork Riv- have already removed about significance of the event. er, just below its confluence 15,000logs in addition to tons A dam came down. A rivwith the Blackfoot River, of metal trash that had been er flows free again after more about 7 miles east of Mis- tossed into the reservoir — ev- than 100years of constriction. soula. The earth-filled dam erything from old wood stoves My companions seemed to was built in 1908 to sup- to sawblades. lack my enthusiasm, but maybe ply hydropower to nearby Nowthe main concern is two they were just tired of fighting sawmills in the small town flat-faced Interstate 90 bridge the day&#39;s continuous upstream W1Ild.

bling turbulence in a narrow Floating past the banks section of the Blackfoot River where the dam once stood, I just before it joins the Clark felt as if I should celebrate. It Fork FWP plans to close that seemed surreal. I could imagsection of the river during high inethedam looming above and Butte. water out of concern for float- the raft passing through it as if In addition to backing up ers&#39; safety. it was only a mirage. water,the reservoir created by the dam also became the

resting site for an estimated 6.6 million cubic yards of soil contaminated with

I&#39;ve known the Blackfoot River since I was a student at the University of Montana in

hats and noisemakers when I float past. Then my fellow boat-

Missoula more than 30 years ers will understand. ago. It was the first river I ever

lead, zinc, arsenic and other canoed. It was the first river on metals washed from the up- which I ever flipped a canoe stream mine works of Ana-

and swam. It was where I lost

condaand Butte. my wedding ring when the caClark never paid for any noe flipped and I swam. of the damage he caused, My wife and I — back then but the progression of com- newlyweds — spent hours expanies that bought him out, ploring the waterway, dodging in addition to the federal its river boulders, admiring its and state governments, steep, forested cliffs, swimming have shelled out a lot of in its deep emeraldpools. cash. To dean up the conSo it was nice to know that tamination and remove the my old friend — and in high dam and remediatethe res- water my nemesis — is once ervoir areaendedup costing $115 million. 2 locations inBend In a lot of f olks&#39; eyes,

The Milltown Dam was removed from the river in

though, that&#39;s money wellspent to restore aportion of a more natural state.

after extensive deanup of the logs and metal trash left behind in the Blackfoot, that