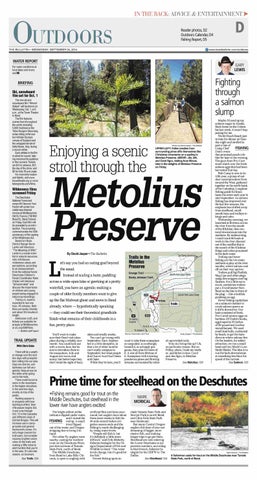 For water conditions at local lakes and rivers, seeB6

Fighting through a salmon slump

The newski and snowboard film &quot;Almost Ablaze&quot; will beshownon Wednesday,Oct. 1,at 8 p.m., at theTower Theatre in Bend. The film features scenes from throughout the world, including

Maybe I&#39;d used up my salmon magic in Alaska. Back home onthe Colum-

Christmas ornaments on a sapling in Metolius Preserve. ABOVE: Jim, left,

that promised peach cobbler for later in the evening. The guys from Pro-Cure stood watch over the fresh salmon eggs that had been

and Carol Sgro, visiting from Illinois,

take in the delights of Metolius Preserve

With ChrisSabo There will be aweather change over the next few days with precipitation rolling into our area. Days are shorter, and darkness can fall very quickly. Keep aneyeon the skies whengoing out to the trails. There could besome snow in the mountains in the higher elevations in the next few days, mostly on top of the peaks. Hunting season is in progress with bow hunting in effect. Deer rifle season begins Oct. 4 and runs through Oct. 15 in theCascades and different areas of Central Oregon. This will increase use incampgrounds and general backcountry areas. It&#39;s not a huge concern for trail users, but consider wearing brighter colors when on the trails and making a little noise to alert hunters thatyou&#39;re in the area. It&#39;s also bee season, so beaware. SeeTrails /D5

Fish Camp is now in its 12th year, a group of outdoor communicators from

aroundtheWest, gathered together on the north bank of the Columbia. Longtime

fishing guide Ed Iman hosts the event each year in mid-September. As salmon

fishing has improved over the last few seasons, the

emphasis has shifted away from steelhead, smallmouth bass and walleye to

kings and coho. Wednesday morning, we launched at Rowena across the river from the mouth of the Klickitat, then motored downstream into the

madness. By midmorning, I could count 66 boats at work in the river channel out of the mudflat that is the mouth of the Klickitat.

By David Jasper •The Bulletin

in the dark water.

Trolling and hover fishing are the two main

et&#39;s say you had an outing goal beyond

Instead of scaling a butte, paddling

methods at play at the river mouths, where salmon cool off on their way upriver. Trollers pull big Flatfish, Mag Lips and other plugs using downriggers and big flashers. For a little extra

across a wide-open lake or gawking at a pretty

waterfall, you have an agenda: making a

Bead on the line in front of the plug — like a baitfish grabbing an egg. Hover fishing capitalizes

already, where — hypothetically speaking — they could see their theoretical grandkids finish what remains of their childhoods in a

place during a reliably nice month. You could luck out with a warm June, but be sure to introduce them to

the mosquitoes. July and August are warm and

sunny, but better hope they don&#39;t mind the sight of hazy

You&#39;ll want to make sure their Bend visit takes

skies and smelly smoke. You can&#39;t go wrong with September. Sure,September is a little deceptive, in

that a lot of other months

want to take them someplace so unspoiled, so soothingly beautiful, so achingly gorgeous, they pine for more of

can&#39;t really compare to September, but what people it. A rest-of-their-lifetime of don&#39;t know won&#39;t hurt them until later.

crush salmon spawn as it drifts downriver. Our baits consisted of fresh,

bia last week, it wasn&#39;t happening for me. We hit Peach Beach just in time for dinner on Tuesday night and strolled in past a line of

Wilderness films screened Friday The Deschutes National Forestand nonprofit DiscoverYour Forest will screentwo wilderness-themed movies at McMenamins Old St. Francis (700NW Bond St., Bend)School on Friday.Eachfilm will be preceded byan introduction. Thescreening commemoratesthe 50th anniversary of thesigning of the WildernessAct. Bend-Fort Rock District Ranger Kevin Larkin will introduce &quot;The Meaning of Wild.&quot; Larkin is a social scientist in natural resources who will discuss wilderness values and perceptions, according to an announcement from the national forest. Deschutes Children&#39;s Forest Coordinator Katie Chipko will introduce &quot;Untrammeled&quot; and discuss the importance of children andyoung people being engagedin natural surroundings. The 6 p.m. event is expected to last one hour, 45 minutes. Both films are family-friendly and about 30 minutes in length. Admission is $5, and tickets are available for presale at McMenamins or at j.mp/DNFfilms.

monofilament. We used small lead balls, cushioned bybeads, to get the baits down to where salmon live.

of uncrowded trails. Why do I bring this up? Uh,

On the leaders, for added attraction, we ran a small

no particular reason. But on

Friday, ahem, I took my moth-

Smile Blades. The idea is to run the baits downstream

it. Someplace with towering

er- and father-in-law, Carol and Jim Sgro, to Metolius

at something less than the speed of the current.

artificial flies and lures yearround, but anglers have about three more weeks to fish the

trout flipped out of the water, and I began stripping line to bring it to hand. Two other fly anglers were nearby, casting for rainbow

gation season ends and the fishing is made challenging by rising water levels. &quot;People still fish it, but

trout on the Deschutes River,

fisheries biologist for the Oregon Department of Fish and

The Middle Deschutes, from Bend to Lake Billy Chinook, is open to angling with

near Redmond. But many Central Oregon anglers this time of year are dreaming of bigger, more elusive fish, and making longer trips to go get them. Steelhead are now entering the Lower Deschutes in impressive numbers, according to Rod French, fisheries biologist for the ODFW in The

A fisherman casts for trout on the Middle Deschutes near Tumalo State Park, north of Bend.