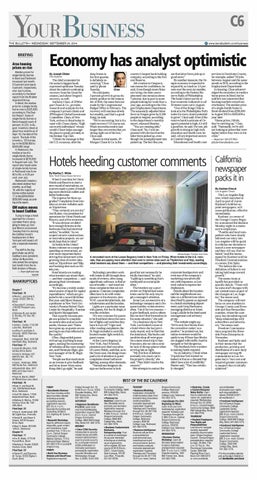 GMmakes moves to boost Cadillac Trying to forge afresh approach for a luxury carmaker that is struggling to keepup, General Motors announced Tuesday that it is moving the Cadillac brand&#39;s headquarters to New York and will break it off into a separate business unit. The shift is the biggest shake-up yet by Cadillac&#39;s new president, Johan deNysschen, who joi nedthecompany last month from the Infiniti division of Nissan. — From staffand wire reports

3percent growth in gross domestic product in the remain-

net-worth individuals&quot; whose wealth Chase helps manage. He plans to speak privately at the Broken Top Club. &quot;I think the message is that the U.S. economy, after the

country&#39;s largest bank holding company,accordingto theFederal Reserve. Job creation in Oregon is one reason for confidence, he said. Even though more firms

see that labor force pick up is good news.&quot;

are hiring, the state unem-

By another measure, the Or-

services in Deschutes County, for example, added 710 jobs between August and the same

cent over the next six months,

In housing, Chan acknowledged the escalation in median

ployment rate remains above 7percent, due inpart to more The bank&#39;s latest survey of der of 2014,the same forecast people looking for work than a four economic indicators in all made by the Congressional year ago, according to the Ore- 50 states came out in August. &quot;One of the things I like to Budget Office in February. The gon Employment Department. recovery will continue slowly The seasonally adjusted labor look at is the Philadelphia Fed&#39;s but steadily, and that&#39;s a good force in Oregon grew by 8,350 index for every state&#39;s potential thing, he said. people in August, according to grow,&quot; Chan said. Even if the &quot;We&#39;re recovering, but is it a to the department&#39;s monthly reserve bank&#39;s estimate of Oregon&#39;s potential is high, it&#39;s still rapidrecovery?Of coursenot. report, released Monday. &quot;You are creating jobs,&quot; Weak recoveries tend to last agoodbet, he said. For one, job longer than recoveries that are Chan said. &quot;So, I was imgrowth is strong in high tech, strong right out of the box,&quot; pressed with the fact that the educationand health care,he Chan said. labor force picked up, even said. All are important sectors Based on total assets, JPthough the unemployment rate in Central Oregon. Morgan Chase &amp; Co. is the picked up. The fact that you Educational and health care

Employment Department. home prices in Bend, but he said he&#39;s not concerned that

year later. &quot;Home prices, I think, they&#39;re catching up,&quot; Chan said.&quot;Nationally, we&#39;re still not looking at prices that were higher before they were in the crtsls. — Reporter: 541-617-7815, jditzler@bendbulletin.com

new round of renovations, executives made a point of install-

The impetus for those up-

ister, which launched in

grades? Complaints from travelers on reviewwebsites such as TripAdvisor. &quot;They certainly are not shy,&quot; Jon Hunter, vicepresident for

operations for Omni Hotels and

Resorts, said ofthereviewers. &quot;It was obvious we didn&#39;t have enough fixtures in the

petitors who have closely

or renovation projects, we cer-

followed our entry into Los Angeles will be quick

tainly kept that in mind.&quot; As hotels in the United

to criticize our decision to

States continue on a surge in spending on renovations, an

launch a new newspaper and they will say that we

drivingthis investment is the growing clout of review sites such as TripAdvisor and Yelp, andbookingsites such as Ho-

A renovated room at the Loews Regency hotel in New York on Friday. When hotels in the U.S. renovate, they are paying more attention than ever to review sites such as TripAdvisor and Yelp, reading

what travelers say about them —and their competitors — and planning their investments accordingly.

signed by Kushner and his Freedom Communications co-owner, Eric Spitz.

definition of failure is not

Hotelbrands are reading what travelers say about them

with hotels to siit through thou-

corporate headquarters and even one of the company&#39;s

— and their competitors — and planning their investments

&quot;Lighting is something that&#39;s sands of reviews, oftenusing algorithmic software, to find ar- mentioned on social quite

eas of trouble — and weed out those complaints that are not

stood source of input for capital expenditures,&quot; which areprojected to hit a record $6billion this year, said Bjorn Hanson, a professor at New York Uni-

review on TripAdvisor some-

Details about the location

often have to do with water

times can be the only way to get a manager&#39;s attention.

and the neighborhood can

the changes in Los Ange-

Lights are aparticular issue with guests. For the St. Regis, it

The company will now focus on core markets in Orange County and Riverside and San Bernardino counties, where the company has decadeslong and &quot;deep relationships with subscribers and advertis-

Center for Hospitality, Tourism and Sports Management. That is partly because people are quicker to complain on review sites and on social media, Hanson said. &quot;Rates

have gone up, so guests are expecting to see that reflected in the quality.&quot; Often, disgruntled guests will not say anything to managers, making the monitoring of websites allthe more important, said Hermann Elger, general manager of the St. Regis New York. &quot;People use that much more

as an avenue to give feedback and let us know when something didn&#39;t go right,&quot; he said.

&quot;It&#39;s very common for guests to be frustrated about the number of lights and switches they have to turn off,&quot; Elger said. After reading complaints, the St. Regis induded a centrally locatedmaster light switch in guest rooms. AttheLoewsRegencyin New York, Paul Whetsell,

The travelers say a poor

Janae Lee, an executive at a

technologycompany and afrequent traveler, writes reviews often. &quot;I do it for two reasons-

to give feedback, and so others like me don&#39;t find themselves in the same situation,&quot; she said.

On abusiness trip to New York, Lee booked a room at a hotel where she had previ-

the Omni case, the design team

ously stayed, only to find that the restaurant, Starbucks and sundries shop all were gone. On a more recent trip to San Francisco, she ran into a similar lack of dining options when arriving late at night. &quot;My first line of defense

paid a lot of attention to guest

normally is to reach out to

president and chief executive of Loews Hotels, said that, as in

complaints aboutbathroom the property directly,&quot; she lighting, among other elements. said. &quot;They didn&#39;t resolve the &quot;Sometimes designers deconcern.&quot; sign our bathrooms to look Her attempts to contact the

notyield responses, so Lee went online to express her displeasure.

managing director at Jones Lang LaSalle in the hotel asset management and advisory group. &quot;The website might say, &#39;We&#39;re only four blocks from the convention center,&#39; as a positive,&quot; he pointed out, but

The memo hints at

layoffs but provided no specific details. &quot;There will be some staff changes with our content team as part of

online reviewers would be

quickto sayif those four blocks are dogged with traffic, hard to navigate or feel dangerous. This feedback fromtravelers is making hotels respond.

&quot;As an industry, I think when

in their memo that the

production, printing and distribution of a new daily

communities in Los An-

looked at that as a channel that didn&#39;t have a lot of credibility,&quot;

geles had a &quot;real cost and required greatercommunity support than it initially