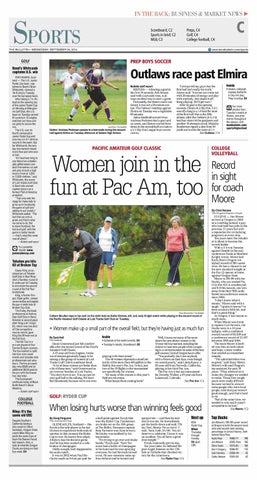 Jensen said. &quot;Anyone can come out said with a sarcastic tone, is alwith 20 minutes of energy and play ways an ideal way to start a game. with anybody. Just shake it off. Fortunately, the Sisters coach con- Keep playing. We&#39;ll get ours.&quot; tinued, it was not a 20-minute conAfter its goal in the opening test. The Outlaws&#39; matchup against seconds, Elmira (0-2 Sky-Em, 3-2-1 Elmira on Tuesday was a regulation overall) clung to a 1-0 lead for most

lead on the opening day of the Junior Ryder Cup on Mondayat Blairgowrie Golf Club, the U.S. team on Tuesdayearned

matches (six boys and six girls) to secure the win. The U.S. won its fourth consecutive Junior Ryder Cupand now has a5-3-1 all-time record in the event. But for Whitcomb, the twoday tournament meant more than just who won or lost. &quot;It&#39;s heartwarming to see these two unbelievably gifted teams conduct themselves sowell and play at such ahigh level in front of1,500 or 2,000 children,&quot; said Whitcomb, the owner of Lost Tracks Golf Club in Bend whoearned captain honors as a former PGAof America president. &quot;Thatonly sets the stage for these kids to grow up to be playing the game of golf and adding to our society,&quot; W hitcomb added.&quot;The fact that we won is great, and that&#39;s what we came to do. But to leave Scotland, the home of golf, with the game in better hands

&quot;I always tell my guys that the first half isn&#39;t really the truth,&quot;

Joe Kline I The Bulletin

of the first half. But in the 39th

Andreas Pedersen had a goal and

minute, after the Outlaws (2-0,3-2) had four shots hit the goalposts and

an assist, and Sisters scored three

times in the second half en route to a 4-1 Sky-Em League boys soccer vlctory.

Sundstrom ripped a shot from 30 yards out to even the score at 1-1. See Outlaws/C4

as a coaching nomad, a guy who had held four jobs in the previous 11 years but with a reputation for revitalizing programs at every stop. Ten years later, the rebuilder is about to become the

against Seattle in the nonconference finale at Matthew

the Pac-12 opener at home

Riley: It&#39;s the same oldUSC Despite Southern California having a new coach in Steve Sarkisian, OregonState coach Mike Riley expects the sametype of team the Beavers faced last season. Also, a look at what the Oregon Ducks are doing on their bye week,C4

13 in the AVCA coaches poll and 9-0 this season, one win away from their fifth unde-

feated nonconference season since 2006. &quot;I don&#39;t know what it means,&quot; Moore said with a

laugh. &quot;I guess it means I&#39;ve been around a little bit, and Ryan Brennecke/The Bulletin

Colleen Moulton taps in her putt on the ninth hole ns Kathy Nichols,left, nnd Judy Knight watch while playing in the second round of the Pacific Amateur Golf Classic nt Lost Tracks Golf Club on Tuesday.

• Women makeup asmall part of the overall field, but they&#39;re having just as muchfun By Zack Hall

Amateur Golf Classic. A 47-year-ol dfrom Eugene, Greenw ood seemedgenuinely happy to be among a like group of women at Lost Tracks Golf Club in southeast Bend.

&quot;A lot of these women are better than

a lot of these men,&quot; said Greenwood on an overcast Tuesday at Lost Tracks. &quot;You don&#39;t have to act. You can just let

your golfball to the talking. We don&#39;t feel threatened, because we&#39;re not even

At Oregon, it has meant so

much more. When Moore was hired to replace Carl Ferreira, the

Ducks were in a 10-year tailspin, with a combined overall record of 86-209 and

Well, it turns out many of the same draws for men attract women to the

playing with them (men).&quot; The 46 women represent a small miwith a frown on their face, even though nority of the more than 400 golfers in the we scored poorly,&quot; said Linda Kueny, a field at this year&#39;s Pac Am. In fact, just 63-year-old from Norwalk, California, two of the 18 flights in the tournament playing in her third Pac Am. are specifically for women. The Pac Am is but one tournament Yet many of the women in this year&#39;s for Dorothy Walker, a 67-year-old from field are returnees. Lakewood, Colorado. What keeps them coming back? SeePac Am/C4

photos from Tuesday&#39;s match at Sisters, and prep events throughout the season, visit bendbnlletin.com/ sports/hlghschool

the pro with the lowest

Casey King, anassistant pro at Tokatee Golf Club in BlueRiver, shot a flawless round of 9-under-par 63 Tuesday to dominate the second round of the FallTour Invitational. King, a former Oregon State golfer, carded seven birdies andeagled the par-4 ninth hole at Broken TopClub. Tim Fraley, the head professional at Awbrey Glen Golf Club in Bend, finished in second place after firing a 67.King&#39;s 63, which was oneshot off the competitive course record, gave King the 36-hole win at the Fall Tour. The Fall Tour is a pro-am played at four Central Oregon courses. The tournament is split into four one-round events and includes club professionals andamateurs. The low pro each day wins $500 andan additional $500 goesto

and hope, a toxic combo that needed an immediate

Moore&#39;s wife and Oregon&#39;s top assistant the past 10 years. &quot;They allowed us to make the changes we needed to make. Those first couple

years were really difficult because we had to remove some people who were local people, kids that just weren&#39;t good enough, and that&#39;s hard to do. &quot;But at the same time, we needed to win and it wasn&#39;t acceptable to be last.&quot;

a half-point against Furyk that won the Ryder Cup. Pandemonium broke out on the 18th green at The Belfry. European captain

sprayed me — and then he real-

ized it was me. He immediately

McGinley was mobbed by his

Cup is over. He knows how empty

deserve to celebrate. I know it was an accident. You allhave a good

By Doug Ferguson The Associated Press

Furyk is the only player in the last

And he has been soaked in a celebrationofchampagne. Oddlyenough,both happened in the same match.

&quot;I&#39;m trying to go over and shake hands,&quot; Furyk said. &quot;Sam Torrancehad a bottle ofchampagne in his hand and he was spraying everyone. He had his back turned

to me. He saw someone come up from behind and he turned and

it feels to lose the decisive game.

guel Angel Jimenez on the 17th hole at Valhalla that clinched victory for the Americans.