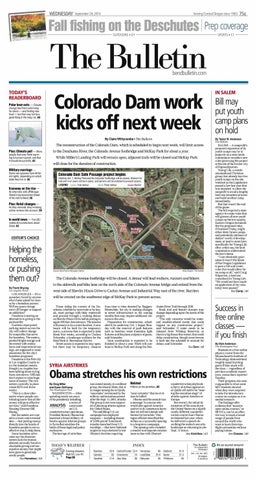 By Taylor W. Anderson The Bulletin

The reconstruction of the Colorado Dam, which is scheduled to begin next week, will limit access Plus: Climate poll — More people than ever think warming is human-caused, andthat it should be apriority. A3

to the Deschutes River, the Colorado Avenue footbridge and McKay Park for about a year. While Miller&#39;s Landing Park will remain open, adjacent trails will be closed and McKay Park will close for the duration of construction.

at the site of the former city

of Rajneeshpuram. Young Life, a nonde-

Military marriageSame-sex spouseshavedifferent rights, depending on which state they live in.AS

group that already has two

Starting Oct. 1, McKay Park and the Colorado footbridge will be closed. Detours for trail and river users will be in place, and barriers will be installed to prevent access. • • • • River detour LEGEND • • • • Trail detour — B a rrier

youth camps on the site, e

was intended to allow the

nonprofit to avoid a lengthy land use exception process

agency to create rules that

will govern all new youth camps on the low-quality, Eastern Oregon farmland. But the proposed rules, if finalized Friday, might

and potentially millions of dollars&#39; worth of develop-

of the game. The bill required a state

and build another camp

As they remodel, they&#39;re taking online reviews into account.C6

watched as the Legislature passed a law last year that

ment, or lead to more laws

antee it wasn&#39;t the intent

of the Oregon Legislature to pass a bill and create Source: Bend Park &amp; Recreation District

quandary faced by anyone who&#39;s been asked for money by a homeless person: Will my spare change stave off hunger or support an addiction?

Pasadena is testing an alternative to giving to the

panhandler. Fourteen repurposed parking meters across the city will collect change for nonprofits that serve the homeless. The meters,

painted bright orange and decorated with smiley faces and inspirational sayings, are supposed to raise awareness for the city&#39;s homeless programs.

west side of Shevlin Hixon Drive to Carlon Avenue and Industrial Way east of the river. Barriers

though Los Angeles has been talking about trying them downtown. Officials

raised $270 over three weeks. &quot;This is a clear alter-

native where people contributing know that all the money will go to effective services,&quot; said Pasadena Housing Director Bill Huang. But the meters are rooted in a more controversial

idea — that putting money directly into the hands of homeless people is not an effective way to help them. Some homeless advo-

rules that would allow for

no camp at all,&quot; said Craig Kilpatrick, a land use consultant for Young Life.

will be erected on the southwest edge of McKay Park to prevent access. Those riding the current of the De- from time to time denoted by flaggers. chutes River Trail through 2016. schutes, whether by inner tube or by kay- Meanwhile, the city is making changes Road, trail and feature dosures may ak, must portage with their watercraft to sewer infrastructure in the coming changedepending upon theneeds ofthe and proceed through a walking detour months that may require additional clo- project. &quot;The only concerns would be wateron Shevlin Hixon Drive before putting in sures in the area. again 600 feet downstream. The takeout Preparationfor construction, sched- and weather-related events that could will remain in its current location. A new uledtobe underway Oct.1,began Monhappen on any construction project,&quot; beach will be built for the temporary

day with the removal of park features

said Schneider. If water needs to be

put-in, a process that is expected to take such as benches, water fountains, light releasedfrom Wickiup Reservoir, or about four weeks, according to Chelsea fixtures and the plaza sculpture of geese, there&#39;s a big freeze this winter, that could Schneider, a landscape architect for the said Schneider. delay construction, though some leeway Bend Park &amp; Recreation District. Dam construction is expected to be is built into the schedule to account for Street access is expected to stay open, finished in about a year. Workwill con- delays, said Schneider. but there may be temporary closures tinue in McKay Park and along the DesSee Dam /A6

Pasadena is the first city

in Los Angeles County to

spending nearly sixyears of his presidency installing a series of

was aimed mainly at amilitant group, the Islamic State, that is no longer among the al-Qaida &quot;associates&quot; envisioned bythe military authorization passed after the Sept. 11, 2001, attacks.

The group is not even suspected of planning attacks against the United States.

counterterrorism operations, The unfolding U.S. air President Barack Obama has campaignhasemployed launched a broad military ofweapons — including dozens fensive against Islamist groups of 3,000-pound Tomahawk in Syria that stretches the missiles launched from U.S. limits of those legal and policy warships — that have flattened endosures. targets in ways destined to test The barrage ofairstrikes Obama&#39;s doctrine requiring

counterterrorismplaybook: a flurry of strikes against an al-Qaida cell said to be &quot;nearing the execution stage&quot; of

Students in a free online physics course from the Massachusetts Institute of Technology demonstrated roughly equal learning gains if they stuck with the class— regardlessof previousacademic experience,researchers reported Tuesday. Their progress also was comparable to what some MIT students showed

when they were required to take the introductory

ians be killed. Obama said the assault was a message&quot;to anyone who would plot against America

attacks against America or

course on campus as a re-

and try to do Americans harm that we will not tolerate safe havens for terrorists.&quot; Pen-

the United States on a significantly different counterter-

open online courses,&quot; or MOOCs, can be an effec-

tive way to teach a broad

tagon officials described the strikes as a successful opening to a long-term campaign. The opening salvo included a smaller and separate mission

envisioned last year, when he delivered a speech de-

range of people from

But overall, the initial dimensions of the assault put

landscape as returning to preSept. 11 status. See Airstrikes /A5

around the world who want to learn from topflight universities without

element normally found in charitable giving and monopolize money that might have gone to genuinely needy people. See Homeless/A6