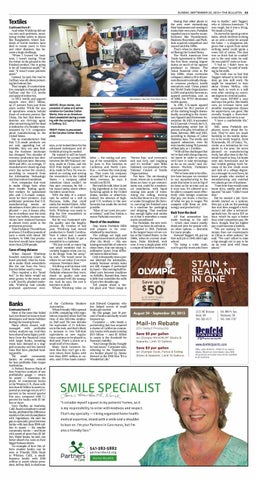 was in textile,&quot; said Taggert, who is African-American. &quot;It was rough, but it was a living. We made a living.&quot; He started by openingcotton bales, which involved striking an ax onto a metal tie around the bales — a dangerous job, given that a spark from metal striking metal could ignite a room full of cotton. The dust was so thick that he couldn&#39;t see to the next aisle, he said. He was paid 87 cents an hour. &quot;I had to. I didn&#39;t have no otherchoice,&quot;he said ofworking in the mills. The work was so bad that Taggert refused to let his children go into mill work. He might be surprised to hear about Donna M cKoy, w ho went back to work in a mill even after earning an associate degree in criminal justice. She earns $47,000 a year and says the perks, like health care, an in-house nurse and monthly management classes for supervisors, are good. She recently bought a three-bedroom house and owns a car. &quot;I have a comfortable life,&quot; she said. Still, some Parkdale employees worry about the future. They&#39;ve seen too much hardship in the textile industry to be overly hopeful. Scott Symmonds, 40, of Galax, Va., works as a technician for two plants in the area. He never planned o n m a n ufacturing work, but after time in the National Guard in Iraq, his home went into foreclosure and he had trouble getting work because ofhis low credit score

and lackof a college degree. As a teenager in rural Iowa, he knew people who worked in manufacturing and watched two plants go out of business. &quot;I saw how they would come home dirty, smelly and often injured,&quot; he said. &quot;I didn&#39;t want that.&quot; But he needed a job. Symmonds started as a spinner, then got a job on the packing line and then snagged a technician&#39;s job after a technicalaptitude test. He earns $15 an hour, which he says is better than what competitors pay. He fears, though, that his higher pay could become a liability. &quot;We are making far more money than ourcounterparts in China or other nations,&quot; he said. &quot;We can&#39;t afford to take a big enough cut in pay to be on an even level with those places.&quot;

of th e C a l ifornia B a nkers tant Edward Carpenter, who Association. has helped scores of small Continued from E1 When Friendly Hills opened banks get started. Most of the ones that failed in 2006, complying with reguBy this gauge, just 19 perI I had overdosed on loans to land lations required about half the cent of banks nationally would developers and home builders time of one full-time employ- measure up. during the housing boom. ee, Ball said. He now devotes Carpenter — who heads a Many others remain well- the equivalent of I&#39;/2 full-tim- partnership that has acquired managed w i t h pr o f i table ers to the task, and that&#39;s likely a cluster of California commu(On Select Products) niches, analysts say. And they to increase to two f ull-time nity banks with assets totaling Save $5 per gallon have shared some legacy prob- equivalents as new r egula- $3.8 billion — said $1 billion lems from the financial crisis tions continue to be phased in, in assets is the threshold for on Olympic MAXIMUM&#39;&quot;&#39; Stains 8 with larger banks, including Ball said. That&#39;s a strain on a financial viability. Sealants. Limit 10 Gallons &quot;And George Bailey thought weak loan demand in a slug- small staff of two dozen. gish economy and low interest Many bank i nvestors behe had issues,&quot; Carpenter said, Save $3 per gallon rates that have pinched lend- lieve that they can&#39;t get a de- referring to the Depressionon Olympic Deck, Fence 8 Siding ing profits. cent return from banks with era banker played by Jimmy Stains 8 Sealants. Limit10 Gallons. Yet s m a l l com m u nity less than $500 million in asStewart in the 1946 film &quot;It&#39;s a banks, on average, remain sets, said Irvine bank consul- Wonderful Life.&quot; far less profitable than larger institutions. A Federal Reserve Bank of San Francisco analysis of one profitability gauge — return on assets — i l lustrates the pinch. At commercial banks in the Western U.S., those with less than $1 billion in assets reported an average return of 0.7 percentin the second quarter this year, compared with 1.1 percent for banks with $1 bil&quot;I consider myself a guest in my patients&#39; homes, so it lion or more. Gary Findley, an Anaheim, is my responsibility to enter with kindness and respect. Calif.-based consultant to small banks, attributed the difference That&#39;s my specialty — I bring organized home health mainlytothe cost ofcompliance with regulations. He said the medical expertise, mixed with a smile and a shoulder gap is especially great between banks with less than $500 milto lean on. I&#39;m your Partners ln Care nurse, but I&#39;m lion in assets — the smaller community banks — and those also a friendly face.&quot; with assets of more than $1 billion. Major banks, he said, can better absorb the costs on their bigger balance sheets. An example of how this af541-382-5882 fects smallerbanks can be seen at Friendly Hills Bank partnersbend.org in Whittier, Calif., a smallbusiness lender w it h $ 1 00 ln Care million in assets whose president, Jeffrey Ball, is chairman -

www.denfeldpaints.com Offer valid: 8/24/13 — 9/30/13 via mail-in rebate. Maximum total rebate value $50. All products and sizes may not be available at all locations.