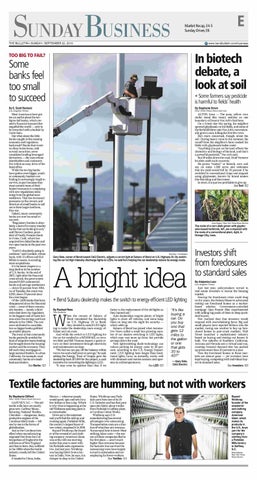 TOO BIG TO FAIL?

too sma to succeed

• Some farmers saypesticide is harmful to fields&#39; health

Most Americans have gotten an earful about the toobig-to-fail banks, which created a financial tsunami that engulfed the world — only to be rewarded with a bailout by Uncle Sam. But what about the little banks caught in the ensuing economic and regulatory backwash? Banks that wrote no dicey home loans, sold no toxic securities, never consideredtrading leveraged derivatives — the ones whose shareholders and customers live within an easy drive of the head office. While the too-big banks have gotten even bigger, smaller community bankers are finding it increasingly tough to survive, in partbecause they must commit more of their limited resources to complying with new regulations stemming from the global nearmeltdown. That has increased pressures on the owners and directors of small banks to sell out to their larger brethren, they say. Indeed,many community banks are now too small to succeed. &quot;Regulatory burden is absolutely a factor for many smaller banks that are looking to exit,&quot; saidSteven Gardner, president of Pacific Premier Bank in Irvine, Calif., which has acquired two failed banks and two open banks in the past two years. &quot;And it&#39;s absolutely going to continue,&quot; said Gardner, whose bank, with 13 offices and $1.6 billion in assets, is scouting more acquisitions. It&#39;s the latest chapter in a long decline in the number of U.S. banks. At the end of 2007, right after the financial crisis struck, the government insured8,534 commercial banks and savings institutions — down 52 percent from 1984. As of Tuesday, the count was 6,926, down 19 percent since the crisis began. Of the 1,608 banks that have disappeared since the financial crisis — most of them community lenders — nearly a third were shut down by regulators in the biggest rash of bank failures since the savings and loan debacle in the 1980s. The rest were attributed to consolida-

ALTON, Iowa — The puny, yellow corn stalks stand like weary sentries on one boundary of Dennis Von Arb&#39;s field here. On a windy day this spring, his neighbor sprayed glyphosate on his fields, and some of the herbicide blew onto Von Arb&#39;s conventionally grown corn, killing the first few rows. He&#39;s more concerned, though, about the soil. During heavy rains in the summer, the runoff from his neighbor&#39;s farm soaked his fields with glyphosate-laden water. &quot;Anything you put on the land affects the chemistry and biology of the land, and that&#39;s a powerful pesticide,&quot; Von Arb said. But 20 miles down the road, Brad Vermeer brushes aside such concerns. He grows &quot;traited,&quot; or biotech, corn and soy on some 1,500 acres and estimates that his yield would fall by 20 percent if he switched to conventional crops and stopped

tion as bigger banks gobbled up smaller players. The irony is that community banks generally avoided the kind of subprime home lending that brought down the housing market andthe economy. They left such risky mortgages to large national lenders. In urban California, for example, most community banks are smallbusiness lenders. See Banks/E3

using glyphosate, known by brand names like Roundup and Buccaneer. In short, it is just too profitable to give up. SeeSoil /E2

The roots of a corn stalk grown with glyphosate-based herbicide, left, are compared with the roots of a conventional plant, right, in Orange City, lowa.

hen the owners of Subaru of Bend remodeled thedealership on U.S. Highway 20 in Bend, they decided to install LED lighting to make the dealership more energy efficient and cut costs. And while the switch to LED lighting for the car lot resulted in a $47,000 bill, co-owners Matt and Bill Thomas expect a quick return on their investment through electricity and maintenance savings. &quot;We feel we can pay off the balance within two to two and a half years in savings,&quot; he said, adding the Energy Trust of Oregon gave the dealershipback $17,000 for the project,a cash incentive for converting the lighting to LED. &quot;It may even be quicker than that if we

factor in the replacement of the old lights as they burned out.&quot; Auto dealerships require plenty of bright lights to show off vehicles, and some keep them on long into the night for securitywhich adds up. Subaru of Bend has joined what Automotive News called a small but growing number of car dealers switching to LED lights, which may cost more up front, but provide savings down the road. New light-emitting diode technology can reduce parkinglotenergy costs by 40 percent, according to the U.S. Energy Department. LED lighting lasts longer than traditional lights, turns on instantly, works well with dimmers and motion sensors and operates in cold temperatures. SeeLED/E5

buying a car. Do you buy one that

the gallon or one that gets 30 to 4pg

Just last year, policymakers turned to real estate investors to rescue the housing market. Fearing the foreclosure crisis could drag on foryears,the Federal Reserve advocated renting out foreclosed homes as a marketbased s olution. G o v ernment-controlled mortgage titan Fannie Mae experimented with selling big pools of them to deep-pocketed buyers. Few realized then that investors would respond with overwhelming force: Big and small players have injected billions into the market, racing one another to buy up foreclosed homes in post-crash markets. Wall Street launched a sophisticated industry based on buying and renting out homes in bulk. The suburbs of Southern California, Arizona and Nevada saw a virtual land run, creating frenzied demand that has pushed up prices more than 20 percent in a year. Now the foreclosed homes in those markets are almost gone — yet investors have kept buying, competing with individual buyers in standard sales. SeeInvestors/E5

Textile factories are humming, but not with workers By Stephanie Clifford New York Times News Service

GAFFNEY, S.C.— The old textile mills here are mostly gone now. Gaffney Manufacturing, National Textiles, Cherokee—clangorous,dusty, productive engines of the Carolinas fabric trade — fell one by one to the forces of globalization. Just as the Carolinas benefited when manufacturing migrated first from the Cottonopolises of England to the mill towns of New England and then to here, they suffered in the 1990s when the textile industry mostly left the United States. It headed to China, India,

Mexico — wherever people would spool, spin and sew for a few dollarsorlessa day.Which is why what is happening at the old Wellstone spinning plant is so remarkable. Drive out to the interstate and you&#39;ll find the mill up and running again. Parkdale Mills, the country&#39;s largest buyer of raw cotton, reopened it in 2010. Bayard Winthrop, the founder of the sweatshirt and clothing company American Giant, was at the mill one morning earlier this year to meet with hisParkdale salesrepresentative. Just last year, Winthrop was buying fabric from a factory in India. Now, he says, it is cheaper to shop in the United

States. Winthrop uses Parkdale yarn from one of its 25 U.S. factories and has that yarn spun into fabric about 4 miles from Parkdale&#39;s Gaffney plant, at Carolina Cotton Works. Winthrop says U.S. manufacturing has several advantages over outsourcing. Transportationcosts are a fraction of what they are overseas. Turnaround time is lower. Most striking, labor costs — the reason all these companies fled in the first place — aren&#39;t much higher than overseas because the factories that survived the outsourcing wave have largely turned to automation and are employing far fewer workers. SeeTextiles /E3

Bayard Winthrop, founder of the sweatshirt and clothing company American Giant, which makes its products in the U.S., buys yarn for the