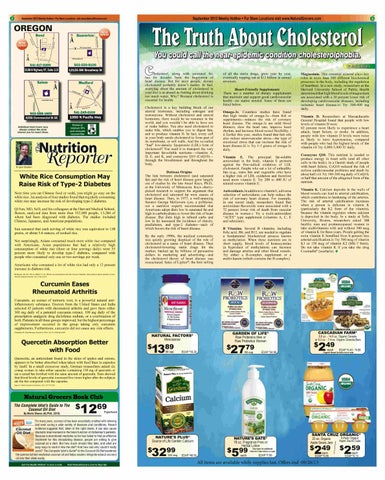 h olesterol, a l on g

has for decades been the bogeymen of

heart disease. But fo r m o s t p eople, dietary cholesterol probably doesn&#39;t matter. In f act, worrying about the amount of cholesterol in your diet is as absurd as fretting about drinking too much water. Why? Because cholesterolis essential for health.

Cholesterol is a key building block of our steroid hormones, including estrogen and

testosterone. Without cholesterol and steroid hormones, there would be no romance in the world, and you wouldn&#39;t be able to have sex or make babies. You also need cholesterol to

make bile, which enables you to digest fats, and to produce vitamin D. In fact, every cell

in your body needs cholesterol to form part of its membrane, or cell walls. And the so-called

White Rice Consumption May Raise Risk of Type-2 Diabetes Next time you eat Chinese food or sushi, you might go easy on the white rice. An analysis of four studies found that regularly consuming white rice may increase the risk of developing type-2 diabetes. Qi Sun, MD, ScD, and his colleagues at the Harvard Medical School, Boston,analyzed data from more than 352,000 people, 13,284 of whom had been diagnosed with diabetes. The studies included Chinese, Japanese, and American populations.

of all the statin drugs, grew year by year, eventually topping out at $13 billion in annual revenues.

Heart-Friendly Supplements There are a number of dietary supplements that maintain and support good cardiovascular health — no statins needed. Some of them are listed below. Omega-3s.

&quot;bad&quot; low-density lipoprotein (LDL) form of cholesterol? You need it to transport the very important fat-soluble nutrients — vitamins A,

through the bloodstream and throughout the

out of studies by the late Ancel Keys, Ph.D., at the University of M i n nesota. Keys cherry-

disease. But diets high in refined carbs and low in fat increased the incidence of obesity,

Antioxidants. In addition to vitamin E, adiverse selection of antioxidants can help reduce the risk of coronary heart disease. For example, in one recent study, researchers found that antioxidant flavonoids were associated with a 72 percent lower risk of death from vascular disease in women.v Try a m u l t i -antioxidant

prediabetes, and type-2 diabetes — each of Sun assumed that each serving of white rice was equivalent to 158 grams, or about 5.6 ounces, of cooked rice.

which boosts the risk of heart disease.

Not surprisingly, Asians consumed much more white rice compared with Americans. Asian populations that had a r elatively high consumption of white rice (three or four servings daily) were 55 percent more likely to develop type-2 diabetes, compared with people who consumed only one or two servings per week.

was quietly growing skeptical of the role of cholesterol as a cause of heart disease, Then

Americans who consumed a lot of white rice had only a 12 percent increase in diabetes risk.

By the early 1990s, the medical community

market, backed up by billions of persuasive dollars i n m a r k eting an d a d v ertising — and the cholesterol theory o f h e art d i sease was resuscitated. Sales of Lipitore, the best selling

roles in more than 300 different biochemical processes in the body, including the regulation of heartbeat. In a new study, researchers at the

that high intake of omega-3s — from fish or

emotional stress that can increase the risk of heart disease.iii iv Try 1-3 grams of omega-3s

B Vi t a m ins. Several B v i t a m ins, i ncluding folic acid, B6, and B12, are needed to regulate a fundamental b i ochemical p r ocess known as methylation. When these nutrients are in

with people who had the highest levels of the

cells in the body). In a Danish study of people with heart failure, CoQ10 reduced the risk of serious cardiovascular problems and death by

about half.viii Try 100-300 mg daily of CoQ10, or half that amount of the ubiquinol form of the nutrient. Vitamin K. Ca lcium deposits in the walls of blood vessels can lead to arterial calcification, which contributes to hardening of the arteries. The risk o f a r t e rial c a l cification i n creases w hen a p e r son i s d e fi c ient i n v i t a mi n K

because the vitamin regulates where calcium is deposited in the body. In a study at Tufts University, Boston, researchers asked 388 healthy men and postmenopausal women to take multivitamins with and without 500 mcg of vitamin K for three years. People getting the extra vitamin K benefited from 6 percent less arterial calcification.ix Try 500 mcg of vitamin

short supply, blood levels of homocysteine (a byproduct of methylation) can increase

and damage arteries and other blood vessels. T ry e i ther a B - c o m plex s u pplement o r a multivitamin (which contains the B complex).

Do not take vitamin K i f

Organic Boxed Granola not on sale

Quercetin, an antioxidant found in the skins of apples and onions, appears to be better absorbed when taken with food than in capsules by itself. In a small crossover study, German researchers asked six young women to take either capsules containing 130 mg of quercetin or eat a cereal bar fortified with the same amount of quercetin. Tests showed that blood levels of quercetin increased five times higher after the subjects ate the bar compared with the capsules.

Curcumin, an extract of turmeric root, is a powerful natural antiinflammatory substance. Doctors from the United States and India selected 45 patients with rheumatoid arthritis and gave them either 500 mg daily of a patented curcumin extract, 100 mg daily of the prescription analgesic drug diclofenac sodium, or a combination of both. Patients in all three groups improved, but the highest percentage of improvement occurred in th e group taking only c urcumin supplements. Furthermore, curcumin did not cause any side effects.

easy ways to work it into the diet? And how and why could it really work? The Complete Idiot&#39;s Guidd&#39;to the Coconut OilOietexamines

For manyyears, coconut oil has beenanecdotally credited with relieving and even curing a wide variety of diseases and conditions. Recent evidence suggests that, taken in the right doses, it can also cause Qll p&gt;et dramatic improvement in the brain function of Alzheimer&#39;s patients. &#39; Because conventional medicine so far has failed to find an effective treatment for this devastating disease, people are willing to give coconut oil a shot. But how much should they take, and what are