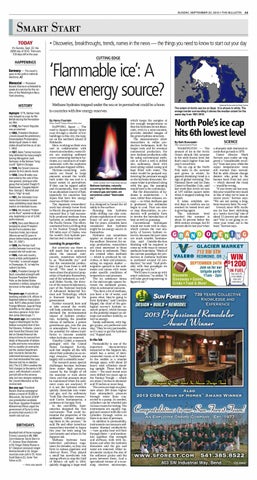 TART • Discoveries, breakthroughs, trends, namesin the news— the things you needto knowto start out your day

CUTTING EDGE HAPPENINGS Germany —The country goes to the polls in national elections.A2

speakat a service for the victims of the Washington Navy Yard shooting.

Methane hydrates trapped under the sea or in permafrost could be a boon to countries with few energy reserves.

was hanged as a spy by the British during the Revolution-

was proclaimed. In1862, President Abraham Lincoln issued the preliminary

Emancipation Proclamation, declaring all slaves in rebel states should be free as of Jan. 1, 1863.

Dempsey in thefamous &quot;longcount&quot; fight in Chicago. In1949, the Soviet Union ex-

ploded its first atomic bomb. In1950, Omar Bradley was promoted to the rank of fivestar general, joining an elite group that included Dwight D.

on the Roof&quot; opened onBroadway, beginning a run of3,242 performances. In1975, Sara Jane Moore attempted to shoot President

(Moore served 32years in prison before being paroled on Dec. 31, 2007.) In1980, the Persian Gulf conflict between Iran and Iraq erupted into full-scale war. In1985, rock and country

music artists participated in &quot;FarmAid,&quot; a concert staged in Champaign, III., to help the

nation&#39;s farmers. In 2001, President George W. Bush consulted at length with Russian President Vladimir Putin as the United States mustered a military assault on terrorism in the wake of Sept. 11.

from a wealthy oil contractor, but the Justice Department later moved to dismiss the

indictment becauseprosecutors had mishandled the case; Stevens lost his re-election

bid.) The U.S.Mint unveiled the first changes to the penny in 50 years, with Abraham Lincoln&#39;s

portrait still on the obverse side, but newdesigns replacing the Lincoln Memorial on the

reverse side. One yearago: President Barack Obama campaigned before a crowd of18,000 in Wisconsin, the home of GOP

government of Syria to bring an end to that country&#39;s18month-old civil war.

SAPPORO, Japan — The road to Japan&#39;s energy future runs through a cluster of low buildings in this city, the largest on the northern island of Hokkaido. Here, working on their own a nd i n c o l l aboration w i t h Americanscientists,researchers are studying sediment cores containing methane hydrates, icy constructs of water molecules with the explosive gas methane trapped within. H ydrate-containing s e d i m ents are f o und i n l a r g e amounts around the world, both under the sea and to a lesser extent in permafrost. If they can be tapped safely and economically, they could be an abundant source of fuel, especially for countries like Japan that have few energy reserves of their own. The Japanese researchers&#39; work has already borne fruit: in March,the government announced that it had successfully produced methane from hydrates in sediments under the Pacific Ocean. The effort, conducted from a drilling ship in the Nankai Trough about 100 miles east of Osaka, was the world&#39;s first hydrate production test in deep water.

Learning its properties But scientists say there is still much that is unknown a bout t h e u n u sual c o m pounds, sometimes referred to as &quot;flammable ice,&quot; and that the commercial production of gas from them is still far-off. &quot;We need to k n ow more about the physical properties of hydrates themselves, and of the sediments as well,&quot; said Hideo Narita, the director of the research laboratory, part of the National Institute of Advanced Industrial Science and Technology, which i s financed largely by t h e government. Further research, here and at labs around th e w o rld, will help scientists better understand the environmental impact of h y d rate production, including the possible release of methane, a potent greenhouse gas, into the sea or atmosphere.There is also the potential for subsea landforms to become unstable when hydrates are removed. Timothy Collett, a research geologist w it h t h e U n i t ed States Geological S u r vey, said that despite all the talk about their potential as an energy resource, &quot;hydrates are largely still a scientific issue.&quot; The research poses special challenges because hydrates form under h igh p r essure, caused by the weight of all the seawater or rock above them, and that pressure must be maintained when the sediment cores are analyzed. If it is not, the hydrates within quickly dissociate into water and gas, and the sediments &quot;look like chocolate mousse,&quot; said Carlos Santamarina, a professoratGeorgia Tech. In th e m i d -2000s, Santamarina designed the f i r st instruments &quot;that could determine the properties of the sediments without destroying them in the process,&quot; he said. He and other American researchers traveled to Japan this year for tests using his instruments and others in the Sapporo lab. M ethane h y drates h a v e bedeviled p etroleum e n gineers for decades, as they can form in subsea pipelines and obstruct flows. They played a small but unwelcome role during efforts to stop the Gulf of Mexico oil spill i n 2010, quickly clogging a huge steel

The extent of Arctic see ice on Sept. 13 is shown in white. The orange border surrounding it shows the median extent for the same day from 1981-2010.

which keeps the samples at low enough temperatures so that the hydrates do not dissociate, even in a near-vacuum, provides detailed images of the grain-hydrate structure. The measurements allow r esearchers to r e f ine p r o duction techniques, both for longer tests and for eventual commercial production. For now, hydrate production calls for using conventional methods in which a well is drilled i nto sediments, lined w i t h steel tubing called casing and kept filled with w ater. The water would be pumped out, lowering the pressure enough so the hydrates dissociate. BeUSGS via New York Times News Service cause water is produced along Methane hydrates, naturally with the gas, the pumping occurring ice-like combinations would have to be continuous. of natural ges and water, are But the dissociation of hysometimes called &quot;flammable d rates is endothermic — i t ice.&quot; uses, rather than releases, energy — so when methane gas box designed to funnel the oil is produced, the sediments safelytothe surface. begin to cool. That can slow Running i n t o hy d r ates or stop dissociation, so prowhile drilling can also com- duction will p r obably have plicate exploitation of conven- to involve the introduction of tional oil and gas reserves. heat as well as pumping. But for years, scientists have Conventional t e c hniques considered t h a t hy d r ates would not work well in clays, might be an energy source in which contain the vast mathemselves. jority of known hydrate reHydrates can sometimes serves, because the pore sizes appear as clumps of ice on are much smaller, Santamathe seafloor. However, for en- rina s a id . O u t side-the-box ergy production, researchers thinking will be required to are most interested in those come up with ways to extract that form in sediments. They methane from them. &quot;Much of are created when methane the current paradigm for pro— which is produced by miduction in methane hydrates crobes, or heat and pressure, is anchored around oil proacting on organic matter duction,&quot; he said. &quot;And probmigrates upward in the sedi- ably with that paradigm we ments and mixes with water may not go very far.&quot; &quot;We&#39;ll have to come up with under specific conditions of temperature and pressure. smart solutions,&quot; he added. &quot;It The icy substance forms will take good engineering to in themicroscopic spaces be- figure it out.&quot; tween the sediment grains, often in substantial amounts. &quot;You have a lot of methane, you have a lot of water, and guess what, they&#39;re going to form hydrates,&quot; said Carolyn Ruppel, the chief of the geo&#39; I logical survey&#39;s hydrate research project, which focuses on the potential impact on climate and seafloor stability, as well as energy. Sandy sediments, with bigger grains, are preferred over clay. &quot;They&#39;re very permeable, so it&#39;s easy to get the hydrates out,&quot; Ruppel said.

By Seth Borenstein The Associated Press

W ASHINGTON — T h e amount of ice in the Arctic Ocean shrank this summer to the sixth lowest level, but that&#39;s much higher than last year&#39;s record low. The ice cap at the North Pole melts in the summer a nd grows i n w i n ter; i t s general shrinking trend is a sign of global warming. The National Snow and Ice Data Center in Boulder, Colo., said last week that Arctic ice was at 1.97 million square miles when it stopped melting this month. It t akes scientists several days to confirm sea ice reached its lowest level and

is growing again. T he min i mu m l ev e l r eached thi s s u mmer i s about 24 percent below the 20th century average, but 50 percent above last year when

a dramatic melt shattered records that go back to 1979. C enter d i r ector Ma r k Serrezesays cooler air triggered a &quot;considerable recovery&quot; from last year, while the ocean temperatures were still warmer than normal. But he adds climate change d eniers who point t o t h e bounce back from last year — which skewed the trend — would be wrong. &quot;If you threw out last year, this year would be very much in line of what we&#39;ve seen in recent years,&quot; Serreze says. &quot;We are not seeing a longterm recovery here. No way.&quot; Overall, since 1979, Arctic sea ice has been shrinking at a &quot;pretty darn big&quot; rate of about 12 percent per decade and &quot;this is not going to reverse your trend, not in the least,&quot; Serreze says.

sEPTEMBER 24TH $ JOin US far our

In the lab Permeability is one of the important char a cteristics measured at the Sapporo lab, which has a series of interconnected rooms at its heart. In the middle is a s m aller storage space, with about 20 heavy steel cylinders standing upright. These hold the cores — the most recent ones were drilled two years ago in the Nankai Trough — which are about 2 inches in diameter and 12 inches or more long. The cores are kept at a pressure about 200 times higher than atmospheric pressure t hrough w a ter l i n e s c o n nected to a pump. As needed, cylinders can be wheeled into various rooms for testing. The instruments are equally rugged and connect with the core cylinders through valves so there is no loss of pressure. In addition to permeability, instrumentscan measure sediments&#39; thermal conductivity — how quickly heat will flow through them — and mechanical qualities lik e s t rength and stiffness, both with hydratesand after the hydrates dissociate and the gas and water are removed. Other instruments analyze the size of the sediment grains and the pores between them. And a specializedversion of a scanning e l ectron m i c roscope,