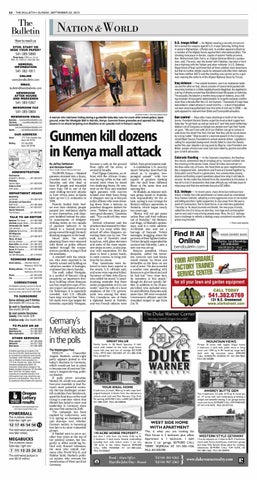 HOW tO reaCh LIS

STOP, START OR MISS YOUR PAPER?

in eastern Afghanistan, officials said, in another apparent attack by a member of the Afghan forces against their international allies. The

Gen. Mohammad Zahir Azimi, an Afghan Defense Ministry spokesman, said. The area, near the border with Pakistan, has been a front line in fighting with the Taliban and other militants. A U.S. Defense Department official confirmed that all three soldiers were Americans but that no further details would be released until after their relatives

had been notified. NATO said the shooting was carried out by agun-

man wearing the uniform of the Afghan National Security Forces.

car and the other on foot, struck a cluster of funeral tents packed with mourning families in a Shiite neighborhood in Baghdad, the deadliest in

a string of attacks around Iraqthat killed at least 96 people onSaturday.

The assaults, the latest in a months-long surge of violence, are a chilling reminder of insurgents&#39; determination to re-ignite sectarian conflict

more than adecadeafter the U.S.-led invasion. Thousands of Iraqis have

CORRECTIONS The Bulletin&#39;s primary concern is that all stories are accurate. If you know ofan error in a story, call us at 541-383-0358.

because a cafe on the ground floor, right off the street, is New York Times News Service owned by Israelis. NAIROBI, Kenya — Masked Fred Ngoga Gateretse, an ofgunmen stormed into a fancy, ficial with the African Union, crowded mall in Nairobi on was having coffee at that cafe Saturday and shot dead at around noon when he heard least 39 people and wounded two deafening blasts. He cowmore than 150 in one of the ered on the floor and watched most chilling terrorist attacks eight gunmen with scarves in East Africa since al-Qaida twisted over their faces firing blew up two U.S. embassies in at shoppers and up at Kenyan 1998. police officers who were shootParents hurled their boding down from a balcony as ies over their children, people panicked shoppers dashed for jumped into ventilation shafts cover. &quot;Believe me, these guys to save themselves, and shop- were goodshooters,&quot; Gateretse pers huddled behind the plas- said. &quot;You could tell they were tic mannequins of designer trained.&quot; clothing stores as two squads Several witnesses said the o f gunmen believed to b e attackers had shouted for Muslinked to a Somali terrorist lims to run away while they group moved through the mall, picked offother shoppers, exshooting shoppers in the head. ecutingthem one by one. The H ours l a ter, t h e ma l l &#39;s mall, one of Nairobi&#39;s most gleaming floors were smeared luxurious, with glass elevators with blood as police officers and some of the most expendashed through the corpse- sive shops in town, is also popstrewn corridors, trying to find ular with expatriates. It&#39;s the the assailants. place to have a power lunch, A standoff with the attack- to catch a movie, to bring chilers, who were reported to be dren for ice cream. heavily armed and holding an Four Americans were beunknown number of hostages, lieved to have been injured in continued into dawn Sunday. the attack, U.S. officials said, The mall, called Westgate, and none werereported killed. is a symbol of Kenya&#39;s rising Secretaryof State John Kerry, prosperity, an impressive five- who called the attack &quot;a heartstory building where Kenyans breaking reminder that there can buy expensive cups of fro- exists unspeakable evil in our zen yogurt and plates of sushi. world,&quot; said the wife of a local On Saturdays, it is especially employee of the U.S. governcrowded, And U.S. officials ment was among the dead. have long warned that Nairo- Two Canadians, one of them bi&#39;s malls were ripe targets for a diplomat based in Nairobi, terrorists, especially Westgate, and two French citizens were

Germany&#39;s Merkel leads in the polls

The estimated jackpot is now $50 million.

islation out of Congress sodangerous people won&#39;t get their hands on guns. &quot;We can&#39;t rest until all of our children can go toschool or

The Washington Post BERLIN Chancellor Angela Merkel&#39;s center-right party appears poised to win today&#39;s elections in Germany, which would put her in place to become one of postwar Germany&#39;s longest-serving political leaders. If p o ll s p r ov e a c curate, Merkel, 59, would win another four-year mandate to lead Europe&#39;s most powerful economy. Her top challenger, centerleft candidate Peer Steinbruck, spent his final days on the road trying to convince voters that Merkel has failed to exert real leadership in Germany since she was first elected in 2005. The campaign has b een marked by controversy over

If Merkel were to serve another four years at the top of her political system, her longevity in office would lag behind only Konrad Adenauer, the man w h o r e built Germany after World War II, and Helmut Kohl, Merkel&#39;s political mentor, who oversaw the reunification of West and East

by a stray bullet,&quot; Obamasaid in a keynote speech to the Congressional Black CaucusFoundation&#39;s annual awards dinner. Legislation calling for expanded background checks failed to clear the Senate

earlier this year despite a strong push byObama, Vice President Joe Biden, people whose lovedones had beenkilled by gunfire and other gun-control advocates. Colorado flooding —In the Colorado mountains, the floodwaters struck Jamestown like an invading army. Houses tumbled into the churning Little James Creek. About 50 miles downstream in

the blue-collar city of Evans, the flood filled up poor neighborhoods like a stoppered sink. Jamestown and Evans are bound together by

Colorado&#39;s worst flood in a generation, two communities among dozens confronting urgent questions about how long it will take to

recover. As the water has drained from the mountains to the plains, it has left a trail of devastation that state officials say will take years to

into the mall from different floors at the same time and opening fire. AI-Shabab, an Islamist militant group based in Somalia, took responsibility for the attack, saying it was revenge for Kenya&#39;s military operations in Somalia, which began nearly two years ago. &quot;Kenya will not get peace unless they pull their military out of Somalia,&quot; Ali Mohamoud Rage, al-Shabab&#39;s spokesman, said in a radio address. A l-Shabab also sent out a barrage of buoyant Twitter

wipe awayandthat one estimate has put at $2 billion. U.S. bishops — In recent years, manyAmerican bishops have drawn a harder line with parishioners on what could beconsidered truly Roman Catholic, adopting a more aggressive style of correction and telling abortion rights supporters to stay away from the sacra-

ment of Communion. But in blunt terms, in an interview published Thursday in16 Jesuit journals worldwide, the new pope, Francis,

called the church&#39;s focus onabortion, marriage andcontraception narrow and said it was driving people away.Now,the U.S. bishops face a challenge to rethink a strategy many considered essential for preserving the faith. — From wirereports

messages, bragging about the prowess of their fighters before Twitter abruptly suspended the account late Saturday. Later, a new one was set up. Kenya&#39;s president, Uhuru Kenyatta, called the terrorists cowards and said Kenya would remain &quot;as brave and invincible as the lions on our coat of arms.&quot; He also sounded a somber note, pleading with Kenyans to give blood and said he had lost &quot;very close family members in this attack,&quot; though he did not specify further. In addition to the 39 people killed, who included women and children, Kenyatta said, more than 150 were wounded. Government officials said the

Saturday &quot;to get back up and go back at it&quot; and help push stalled leg-

Gun COntrOI —Daysafter mass shootings in both of his hometowns, President BarackObamaurged his most ardent supporters

A woman who had been hiding during a gunbattle Saturday runs for cover after armed police, background, enter the Westgate Mall in Nairobi, Kenya. Gunmen threw grenades and opened fire, killing dozens in an attack targeting non-Muslims at an upscale mall in Kenya&#39;s capital.