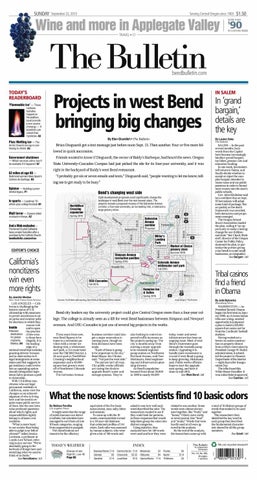 ine an more in

hydrates, trapped on the seafloor,

could provide a new source of energy — if scientists can unlock their mysteries.A3

By Elon Glucklich •The Bulletin

Plus: Melting ice —The Arctic Ocean&#39;s ice cap is continuing to shrink.A3

Governmentshutdown — Which services will or won&#39;t be available if it happens?A7

By Lauren Dake The Bulletin

Brian Dioguardi got a text message just before noon Sept. 13. Then another. Four or five more followed in quick succession. Friends wanted to know if Dioguardi, the owner of Baldy&#39;s Barbeque, had heard the news. Oregon State University-Cascades Campus had just picked the site for its four-year university, and it was right in the backyard of Baldy&#39;s west Bend restaurant. &quot;I probably got six or seven emails and texts,&quot; Dioguardi said, &quot;people wanting to let me know, telling me to get ready to be busy.&quot;

landscape in west Bendover the next several years. The projects include a proposed revamp of theGalveston Avenue corridor, a four-year university, an ice skating rink, a hotel and a

purchase by the Catholic Church.

find a friend in Obama

tax hikes, pension cuts and education funding. In one week, lawmakers will return to Salem, and finally decide whether to accept or reject the complex bargain intended to raises taxes and cut public pensions in order to funnel more money into the state&#39;s public schools. Gov. John Kitzhaber said he&#39;s confident that on Sept. 30 lawmakers will adopt some kind of package. But as quickly as the deal&#39;s framework was unveiled, both detractors and proponents emerged. The Oregon School Board Association lauded the plan, calling it &quot;an opportunity to make a lasting change for our children and state.&quot; But Chuck Sheketoff, director of the Oregon Center for Public Policy, slammed the plan, in particular the portion giving a tax break to some small businesses, asmi sguided. See Bargain/A6

national trend that includes granting drivers&#39; licenses and in-state tuition to illegal immigrants in some states and that suggests legal residency could evolve into an appealing option should immigration legislation fail to produce a path to citizenship. With 3.5 million noncitizens who are legal permanent residents in California, some view the changes as an acknowledgment of who is living here and the need to require some public service of them. But the new laws raise profound questions about which rights and responsibilities rightly belong to citizens over residents. &quot;What is more basic to our society than being able to judge your fellow citizens?&quot; asked Jessica Levinson, a professor at Loyola Law School, referring to jury service. &quot;We&#39;re absolutely going to the bedrock of things here and stretching what we used to think of as limits.&quot; SeeNoncitizens/A5

LOS ANGELES — California is challenging the historic status of U.S. citizenship with measures to permit noncitizens to sit on juries and monitor polls for elections in which they cannot vote and to open • Newest the practice destination of law even for global to those here migrants: i l l e gally. It is Mexico,A4 the leading

SALEM — In the past several months, buzz words from the Capitol have become increasingly

Bend city leaders say the university project could give Central Oregon more than a four-year college. The college is already seen as a lift for west Bend businesses between Simpson and Newport avenues. And OSU-Cascades is just one of several big projects in the works. Three years from now, west Bend figures to be home to a recreation pavilion with a winter iceskating rink, a whitewater surf park, a 114-room hotel near the Old Mill District, a 34-acre park in NorthWest Crossing&#39;s neighborhood expansion and a 45,000square-foot grocery store off of Southwest Colorado Avenue. The Galveston Avenue

businesscorridor could also get a major renovation in coming years, though no firm decisions have been made. &quot;Each of these is going to be important to the city,&quot; Bend Mayor Jim Clinton said. &quot;Not just the west side.&quot; The picture isn&#39;t all rosy. City public works officials are racing the clock to upgrade Bend&#39;s water and sewage systems. They&#39;re

also looking to control expectedtraffic increases as the projects spring up. The city is months away from starting a major upgrade to its westside regional pump station on Northwest Portland Avenue, said Tom Hickmann, Bend engineering and infrastructure planning director. As Bend&#39;s population boomed from about20,000 in 1990 to nearly 80,000

today, water and sewer infrastructurehas been an ongoing issue. Most of west Bend&#39;s wastewater goes through the westside pump station. Upgrading it to handle more wastewater is crucial if west Bend is going to keep growing, Hickmann said. Public works officials hope to start the upgrade next spring, and have it done in mid-2015. See West Bend/A6

WASHINGTON — As President Barack Obama began his first term in January 2009, an Arizona Indian tribe saw a long- awaited opportunity to jumpstart a plan to build a 225,000square-foot casino not far from the Cardinals&#39; football stadium. Having waited out a freeze on casino construction on property distant from atribe&#39;s reservation by President George W. Bush&#39;s administration, it submitted the project to Obama&#39;s Department of the Interior — eight days after Inauguration Day. The tribe found this White House friendlier. It won initial federal approval. SeeCasinos/A5

It might seem that the range of scents humans can detect is infinite, but scientists have managed to sort them all into 10 basic categories, ranging from peppermint to pungent. The classifications are meant to be the olfactory

a total of 10 distinct groups of words that tended to be used together. The researchers then identified the key word in each group that described the fundamental characteristic shared by all the group members. SeeSmell/A6

and umami). To come up with the 10 scents, neuroscientists turned to a 30-year-old database that contained profiles of 144 odors. Each odor was assessed by human subjects, who were given a list of 146 words and

asked to rate how well each word described the odor. The researcherswanted tosee if they could look for patterns in those responses that would help them group the odors into distinct categories. Using statistics, they analyzed how the 146 words were used and how they were