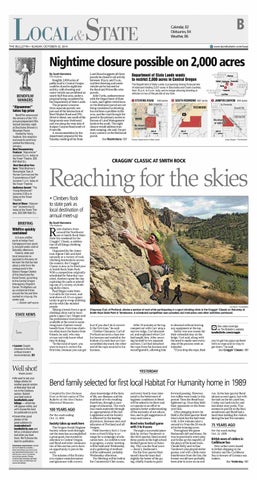 Calendar, B2 Obituaries, B4 Weather, B6

Land Board suggests all three

parcels be dosed to all activity

and that shooting and motor

vehicle use be banned for activity, with shooting and the Bend and Prineville-area motor vehicle use prohibited on parcels. could be closed to nighttime

nearly half that area, under a

proposalbeingconsideredby the Department of State Lands.

Reed Market Road and 27th Street in Bend, one south of the

and one along the west side of

lands to the south. The night closure would address transient camping, she said, the primary concern on the Redmond parceL See Restrictions/B5

A recommendation by the

vehicles on two of the parcels at anytime.

The proposal concerns three separateparcels: one just east of the intersection of

from10 p.m. to 5a.m. daily, and no longer allowing shooting or

No shooting or vehicles

BRIEFING Wildfire quickly contained A 2-acre wildfire north of Indian Ford Campground wasquickly brought under control Saturday afternoon. Federal, state and local resources responded to the early-afternoon fire that burned about a mile from the campground in the Sisters Ranger District of the Deschutes National Forest, according to the Central Oregon Interagency Dispatch Center. Firefighters set up containment lines around the fire andthen worked on mop-up, the center said. — Bulletin staff reports

With a competition originally scheduled for Saturday canceled, climbers spent the day exploring the park or attending one of a variety of climbing skills clinics. PaulSinger came from Corvallis for the event, and said above all, it&#39;s an opportunity to get to swap climbing stories with like-minded people. Taking a break from a sport climbing clinic run by local guide Logan Carr, Singer said the professional instruction available at the event is something most climbers would ers often learn the basics from friends, he said, who may or may not truly know what they&#39;re doing. &quot;In this kind of sport, you want to learn it correct the

first time, because you can get

run in theOutdoors section. Submit your best workat bundbullutin.com/ foliage —all entries will appear online, and we&#39;ll choose thebest for publication in print. • Email other good photos of the great outdoors to ruudurphotos© bundbullutin.com and tell us a bit about where and whenyoutook them. We&#39;ll choosethe best for publication. Submissionrequirements: Include as much detail as possiblewhen and where you took it, and anyspecialtechnique used— as well as your name, hometown and phone number. Photos must be high resolution (at least 6 inches wide and 300 dpi) and cannot be altered.

Chauncey Curl, of Portland, climbs a section of rock while participating in a sport climbing clinic in the Craggin&#39; Classic on Saturday at Smith Rock State Park in Terrebonne. A scheduled competition was canceled, but instruction and other activities continued.

After 10 minutes at the top,

to descend without leaving

ly the first time,&quot; he said. Climber Chauncey Curl of

camped out with Carr atop a narrow ledge, Curl descend-

any equipment at the top.

Portlandsecured a rope into his harness and waited at the

ed, and explained what Carr

had taught him. After secur-

ledge, Curl said, along with

bottom of a rock face as Carr

ing himself to two separate anchors, Curl had detached

the need to make sure every

scrambled skyward, the other

Safety was one reason for their extended stay on the

stepofthe processwent as the rope from the harness and intended. &quot;If you drop the rope, then reconfigured it, allowing him

you&#39;ve got two guys up there with no rope and no way to get down,&quot; he said.

of Well shot! that will

Well shot! • We want to seeyour foliage photosfor another specialversion

clean knowledge of the facts

and every family man inter-

of life, sex diseases and the multitude of evils resulting

therefrom, through a cam-

paign of education. The work was made statewide through

Society takes upwork here The Oregon Social Hygiene Society whose work throughout the state has accomplished a great good, has turned its

an appropriation of the last

mins arrived Friday to arrange for a campaign of edu-

cation here. An exhibit is now

and Bendand other communities of this section are to have

in progress, a mens&#39; meeting will be held next Wednesday and a gathering of mothers will be addressed, probably

an opportunity to join in the

work. The mission of the Society is to replace misinformation

Wednesday afternoon. The Meeting will be held at

and ignorance with correct,

of the necessity of sex education, and to get suggestions of ways and means.

thethird quarter,Bendscored three points in the high school football game here on Saturday. This was the final score — Bend 3, Redmond 0. For the first quarter Red-

mond&#39;s heavier team had slightly the better of the going, chiefly thanks to good

forward passing. However, two tallies were made in this period. Then the Bend boys tightened up. Once they held their opponents on the threeyard line. After plunging down the field in the third quarter Bend tried a kick but the ball went wild. A few minutes later a

secondtryfrom the20resulted in the winning score. Throughout the game Redmond&#39;s left end shone. He was in practically every play, and broke up the majority of the plays of the home team. Claude Kelly and Arthur Vandevert also played stellar games, and with a little more

run. In the last quarter Bend

almost scored again, but with the ball on the ten yard line, Corley ran back too far and

lost about nine yards, This seemed to put life in the Redmond team and Bend had a

hard time holding the visitors during the last five minutes.

interference from the line, the

Sea to beware of German sea

former would have probably been able to score on an end