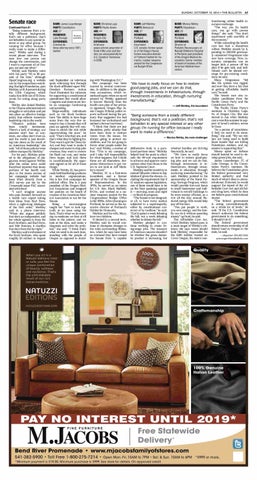 Senate race Continued from A1 &quot;Being someone from a to-

terest or any other group; I&#39;m runningfor office because I really want to make a differ-

seen how on e p erson can

change the conversation, and I want to represent all of Oregon, not just one sliver.&quot; Wehby said Merkley votes with his party &quot;95 to 98 per-

cent of the t ime,&quot; although

OpenCongress.org, a website run by the nonpartisan watchdog Sunlight Foundation, puts Merkley at 91.9 percent during

and September on television

ing with Washington, D.C.&quot; spots criticizing him through Her campaign has been the Koch-affiliated super PAC marred by several controverF reedom P a r tners A c t i on sies. In addition to the plagia-

rism accusations, which re-

for supporting a constitutional

ocrats for voting along party

amendment that would allow

surfaced again when an op-ed penned by Wehby appeared

Congress and states to set lim- to borrow liberally from the Wehby also linked Merkley its on campaign fundraising health care plan of her primato the Obama administration&#39;s and spending. ry opponent, Oregon Rep. JaMega-wealthy individuals son Conger, R-Bend, police restruggles to articulate and put into place an effective foreign such as the Koch brothers ports surfaced during the pripolicy that reflects America&#39;s have &quot;the ability to have huge mary that suggested she had leadership role in the world. sums from the very few at- harassed her ex-husband and &quot;Obama&#39;s policies have tempt to buy a Senate that will stalked a former boyfriend. &quot;I think that these are just been t o tally in c oherent. pass an agenda that will conThere&#39;s a lack of strategy, our tinue to enrich the rich while shameless, petty attacks that enemies don&#39;t fear us any- impoverishing the poor,&quot; he have been done to distract more, our allies don&#39;t trust us, said. &quot;That&#39;s who they are, and voters from the issues. I&#39;m and the world is just devolv- that&#39;s what they&#39;re fighting for. always going to protect my ing into chaos as the result of They want to gut the Clean Air children, and I&#39;m not going to no American leadership,&quot; she Act, and they want to make it throw other people under the said. &quot;All of those policies were cheaper and easier to ship jobs bus,&quot; said Wehby, a mother of rubber-stamped by Merkley.&quot; overseas; they want to restore four. &quot;This is my campaign, For his part, Merkley point- the Bush tax cuts, and make and I take full responsibility ed to the allegations of pla- them larger, and lock them for what happens, but I think giarism levied against Wehby in constitutionally. My oppo- these are all shameless, desafter the online news outlet nent signed on for all of those perate distractions to get votBuzzFeed reportedthat many things.&quot; ers to not look at Jeff Merkportions of her health care While Wehby, 52, has previ- ley&#39;s record.&quot; plan in the issues section of ously held leadership positions Merkley, 57, is a first-term her campaign website had in m edical o rganizations, i ncumbent, an d a for m e r been lifted directly from a this is her first campaign for speaker of the Oregon House 2013 survey put out by the political office. She is a past o f Representatives. In t h e Crossroads super PAC associ- president of the Oregon Med- 1970s, he served as an intern ated with Rove. ical Association and resigned for U.S. Sen. Mark Hatfield, &quot;I can&#39;t imagine anyone her position on the board of R-Ore., and worked as a nuwho puts (herself) forward as trustees of the American Med- clear weapons analyst for the a health care expert taking ical Association to run for the Congressional Budget Office their ideas from Karl Rove, Senate. in the 1980s. After returning to who&#39;s a right-wing ideologue Being a ne u r osurgeon Portland, he served as the exof the first order,&quot; Merkley taught her &quot;how to look log- ecutive director of Portland&#39;s said in a p h one i nterview. ically at an issue using the Habitat for Humanity. &quot;When she argues publicly facts. That&#39;s what we do every Merkley and his wife, Mary, that she&#39;s an independent, and day in medicine; we first of all have two children. her whole agenda is from the listen to the patient, and we If elected to a second term, Koch brothers, and Karl Rove, look at the data, and make a Merkley said he would conand Mitt Romney, it clarifies diagnosis and solve the prob- tinue to champion changes to lem,&quot; she said. &quot;I think that&#39;s the rules surrounding filibusthat she&#39;s from the far right.&quot; Merkley said involvement of what we need to do each time, ters, which he says have been the Koch brothers, who spent standing with the people of so overused they have turned roughly $3 million in August Oregon as opposed to stand- the Senate from &quot;a capable lines.

the economy.&quot; While conceding the health care law ha d

erage for pre-existing conditions, he said. Many Oregonians &quot;felt like the system was rigged, and now they have a fair shot at getting affordable health care,&quot; he said. The Senate race also inc ludes candidates from t h e Pacific Green Party and the Constitution Party. The Pacific Green Party&#39;s nominee is Christina Lugo,

&quot;Being someone from a totally different

cast a vote this summer in support of Israel&#39;s military action

beholden to any special interest or any other group; t&#39;m running for office becauseI really want to make a cfifference.&quot;

moved to run when Merkley in Gaza.

&quot;As a person of conscience, (I feel) we need to do someshe said. &quot;My tax dol— Monica Wehby, his main challenger thing,&quot; lars are being used to build those bombs that are killing Palestinian soldiers, and my

deliberative body to a para- whether families are thriving lyzed partisan mess.&quot; Merkley financially, he said. &quot;We have to really focus helped lead the push to eliminate the 60-vote requirement on how to restore good-payto advance and approve nomi- ing jobs, and we can do that, nations other than those to the through investments in inU.S. Supreme Court. frastructure, through investMerkley said he would try to ments in education, through extend filibuster reform to leg- nurturing manufacturing,&quot; he islation if given the chance, in- said. Merkley pointed to his

cluding the requirement that if

sponsorship of the Rural En-

much of what it does is uncon-

41 senators oppose legislation, one of them would have to be on the floor speaking against it — morning, noon and night — to block its progress.

ergy Savings Program, which stitutional. If elected, he would would provide low-cost loans support the repeal of the Afto small businesses and indi-

viduals to retrofit buildings to be moreenergy efficient,asa &quot;The Senate is not designed, win all the way around. Reat all, to have every motion duced energy bills would help subjected to a supermajority, pay off the loan. &quot;You put people to work, either by constitutional construct or by tradition,&quot; he said. you save energy, and the fam&quot;(Let&#39;s) spend a week debating ily can do it without spending the bill, not a week debating money&quot; up front, he said. The Affordable Care Act, whether to debate the bill.&quot; Merkley pledged to con- which Merkley helped pass, is a main target of Wehby&#39;s crittinue working to create living-wage jobs. The measure icism; she says voters should of American success shouldn&#39;t hold Merkley responsible for be whether the gross domes- the $200 million wasted on tic product is increasing, but Cover Oregon, the state&#39;s non-

should instead be used to de-

the federal government very limited authority and that

fordable Care Act and all fed-

eral drug laws, which he does not believe pass constitutional muster.

&quot;The federalgovernment is acting unconstitutionally on a whole lot of levels,&quot; he said. &quot;If the U.S. Constitution

doesn&#39;t authorize the federal government to do something, it shouldn&#39;t do it.&quot;

The federal government should return ownership of all

rollout, Merkley stands by it, pointing to 300,000 previously uninsured Oregonians who now have coverage. Now, insurance companies can no longer kick a person off his plan if he gets sick, and indi-