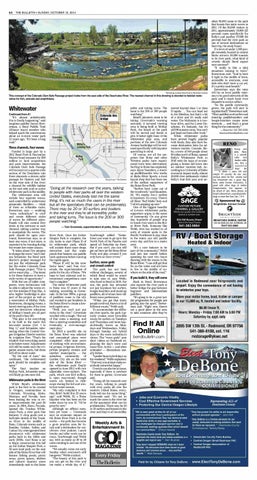 ple remotely located in central Idaho attracts 50,000 tourists to its river park, what kind of

crowds should Bend expect next summer&#39;?

&quot;It really is like a (ski) mountain coming to town,&quot; Bowerman said. &quot;And to have it right in the middle of town,

accessible to everyone, even kids who don&#39;t have a car yet,

it&#39;s a pretty neat benefit.&quot; Bowerman says the onus will be on local paddle veter-

ration for fish, animals and amphibians.

Park, the beach at the park

Three channels,fourwaves Funded in large part by a

section of the Deschutes into three channels: a slower, safer passage for floaters and fish on the west side of the river; a channel for wildlife habitat

of them as inflatable rocks,

of waves for different users. Panels will also control flow levels at the entrance to each

on the east side; and an active whitewater park in the middle. The whitewater area will include four separate waves,

will reconstruct a quarter-mile

&quot;Doing all the research over the years, talking to people with river parks all over the western United States, everybody told me the same thing. It&#39;s not so much the users in the river but all the spectators (that can be problematic). There may be 20 or 30 surfers and boaters in the river and they&#39;re all incredibly polite and taking turns. The issue is the 200 or 300 people watching.&quot;

While whitewater parks whitewater play area, and have proved hugely popular portions of the new Colorado with locals, they also have beAvenue footbridge will be wid- come destination hubs for adened specifically with kayaker venture tourists. Cascade, Idaspectating in mind. ho, a town of 940 people about Of course, not all the sur80miles north of Boise, opened prises that Boise and other K elly&#39;s Whitewater Park i n Western parks have experi- 2010 with the hope of re-enerenced have been detrimental. gizing a former mill town into Surfing in Boise has exploded, an outdoor vacation hub. Acsays Jayne Saunders, a stand- cordingto a University of Idaho up paddleboarder who works economic impact study, almost at Idaho River Sports, a local 20,000 river enthusiasts visited kayak shop that has been one Kelly&#39;s that first year and an-

With the use of tablet com-

puters, wave technicians will be able to adjust the waves ev-

ery few minutes if they like. A new, higher footbridge is also part of the project as well as

a renovation of McKay Park. Restrooms, changing rooms, a tiered viewing area of the river

and the downriver relocation of McKay&#39;s beach are all part of the park&#39;s face-lift.

&quot;The plan is for everything

to be built in the water this

&quot;Surfers have come out of

T-shirts popping up now.&quot; One of the biggest benefits

supporters argue, is the sense of community. On any given day, hundreds of people stop to watch river users in the Boi-

Webb, who has worked in all sorts of remote spots in the

&quot;Phase II will be the wow

The park has not been

to live in the middle of no-

without challenges, several of which Bend would be smart

where on the side of the road.&quot;

to take note of, says Webb,

one, the park has attracted not just kayakers but surfers, making, according to Gover- boogie-boarders and stand-up nale. In the late 1990s, a group paddlers, all of whom have difof paddlers came to the city ferent wave preferences. &quot;When you getthat many and wanted to put boulders in the Boise River to create a low- people involved, there&#39;s a lot of tech rapids area. different wants,&quot; Webb said. &quot;Well, you can&#39;t just put To accommodate the differrocks in the river,&quot; Governale ent river sports, the park typrecalled with a laugh. &quot;But out ically creates more favorable of that came a meeting, and waves for surfers on Tuesdays then a steering committee and and Thursdays and more kayeventually a r i ver-manage- ak-friendly waves on Monment plan.&quot; days and Wednesdays. Friday By 2003 a specific site on through Sunday are hybrid The initial whitewater park in Boise was 16 years in the

the Boise River was selected

days or the wave technician&#39;s

and conceptual plans were

of working with environmen-

Boise River. &quot;I can still get that fix on the water and not have

parksforthecityofBoise.&quot;W e hope to host national and in-

window that everything needs completed. After nine years to be below water. Adjustments

of the earliest supporters of the Boise River Park.

park should be open year- River Park. Once the Esther Scarbrough added. &quot;Some- Pacific Northwest to stay close round, Bowerman says, as at Simplot Park is complete, the times you want to go up to the to the water, can still paddle least one wave, if not more, is city looks to start Phase II of North Fork of the Payette and every day and live in a metro expected to be running during its whitewater park, w hich spend all Saturday up there. area. &quot;It&#39;s a nice balance to be the winter low-water season. will include three more drops But if you can&#39;t, you can still &quot;It takes about five minutes d ownriver an d f l a t w a t er get out here (at the Boise River part of the community,&quot; Webb to change the wave,&quot; said Chel- ponds that boaters can paddle Park) and play around if you said late last month before sea Schneider, the Bend park back upstream before running only have an hour or two.&quot; spending his next two hours district&#39;s project manager for the rapids again. dancing with the waves in the but the entire Colorado Dam SafePassage project.&quot;Thisis active water play.... The intent is forthese featuresto have a wide variety of opportunity.&quot;

Young and alert, Reno is a smooth collie and border collie mix. He&#39;s a wonderful d og! H e is about 2 yearsold and weighs 41 pounds. He was very nervous when hefirst arrived, but has blossomed into a great dog. Reno seeks human interaction, is good with other dogs of similar temperaments, but appearsto be afraid of cats.More photos at brightsideanimals.org/adoptabledogs ormeethim Tues.-Sat., 10-5.

to manipulate the waves. The

not just the whitewater park

give it better sight lines of the I

still 90 minutes away. You can&#39;t just head out there after work.&quot;

will be moved and tiered to

&quot;As the paddle community moved beyondclass Ior class grows, the park will start to issue is the 200 or 300 people II rapids.... You can head out regulate itself,&quot; Bowerman said. watching.&quot; to the Metolius, but that&#39;s a bit &quot;Morepaddlers andsurfers and Bend&#39;s planners seem to be of a drive and it&#39;s really cold stand-up paddleboarders and taking Governale&#39;s warning water. The McKenzie is a two- boogie-boarders means more seriously. A terraced viewing hour drive, and the Lower De- stewards ... and that&#39;s a great area is being built at McKay schutes, it&#39;s fantastic, but it&#39;s thing for the community.&quot; polite and taking turns. The

Located in Redmond near fairgrounds and airport. Enjoy the convenience of not having to winterize your toys.

Back in Bend, Bowerman

paddlers. &quot;It&#39;s going to be a great ladder progression for people just getting into the sport,&quot; Bowerman said. &quot;Right now, there&#39;s not a good place in the area to take someone after they&#39;ve

Find It All Online

will still be made once the irri-

tal groups, irrigation districts, water flow. Active — and often private property owners and animated — discussions usuwill all be above water. another municipality — the ally follow. &quot;By the end of June,&quot; she s uburban community o f &quot;Ipreferthosehybri d dayson continued, &quot;the (whitewater) Garden City sits on the west theweekend,&quot;Webb explained. &quot;That wayyou at least make evpark should be complete and side of the Boise Riveropen.&quot; the whitewater park finally erybody somewhat happy.&quot; T he f i n a l to u c hes o n opened in June 2012 with two Crowds can also be an issue, McKay Park, Schneider notes, adjustable wave-makers. The especially if there is nowhere will likely go into next fall. park, which cost $3.6 million, for them to gather, Governale is open year-round, though said. Whitewater parks inthe West waves are l i mited i n t h eir &quot;Doing all the research over While Bend&#39;s w hitewater scope during the fall and win- the years, talking to people park is the first to be created ter low-water season. with river parks all over the &quot;My only complaint is that western United States, everyin Oregon, communities in Colorado, Wyoming, Idaho, they didn&#39;t build this 20 years body told me the same thing,&quot; Montana and Nevada have ago,&quot; said Webb, 32, a Boise Governale said. &quot;It&#39;s not so been leading the way in riv- kayaker who has been on the much the users in the river but er improvements the past 20 water since he was 12. &quot;I&#39;d be all the spectators (that can be years. In 2004, Reno, Nevada, great by now.&quot; problematic) .There may be 20 opened the Truckee White- Although no official num- or 30 surfers and boaters in the water Park, a river park that bers yet exist — Governale river and they&#39;re all incredibly features 11 drop pools over a says an economic impact on half-mile stretch of the Truck- the Boise River Park is in the gation season starts, but those

works — the park has become

Reno. Colorado towns such as a go-to practice area for loBoulder, Golden, Salida and cals and a destination for outCanon City reinvigorated their of-town river junkies. Lunch downtowns with whitewater breaks and after work can be parks built in the 1990s and crazy, Scarbrough and Webb early 2000s. And Boise is set

to begin construction this fall on the Esther Simplot Park, a 55-acre land park on the east side of the Boise River that will

&quot;We usually come out early Sunday when everyone&#39;s still feature fishing ponds, picnic hungover,&quot; Webb cracked. &quot;The beauty of this park is areas, green spaces, shelters and natural riparian areas you can get on the river and immediately next to the Boise not make a whole day of it,&quot;