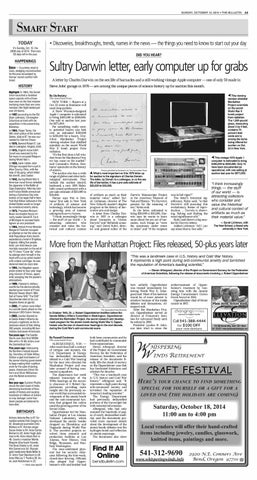 • Discoveries, breakthroughs,trends, namesin the news— the things you needto know to start out your day

HISTORY Highlight:In1964, the Soviet Union launched aVoskhod space capsule with a threeman crew on the first mission involving more than onecrew member (the flight lasted just over 24 hours). In1492 (according to the Old Style calendar), Christopher Columbus arrived with his expedition in the present-day Bahamas. In1864, Roger Taney,the fifth chief justice of the United States, died at 87; hewas succeeded by SalmonChase. In1870, General Robert E.Lee died in Lexington, Virginia, at63. In1915, English nurse Edith Cavell was executed bythe Germans in occupied Belgium during World War I. In1933, bank robber John Dillinger escaped from ajail in Allen County, Ohio, with the help of his gang, which killed the sheriff, Jess Sarber. In1942,during World War II, American naval forces defeated the Japanese inthe Battle of Cape Esperance.Attorney General Francis Biddle announced during a ColumbusDaycelebration at CarnegieHall in New York that Italian nationals in the United States would no longer be considered enemyaliens. In1973, President Richard Nixon nominated Houseminority leader Gerald R.Ford of Michigan to succeedSpiro Agnew as vice president. In1984, British Prime Minister Margaret Thatcher escaped an attempt on her life whenan Irish Republican Army bomb exploded at ahotel in Brighton, England, killing five people. Actor Jon-Erik Hexumwas mortally wounded onthe set of his TV show &quot;Cover Up&quot;when he jokingly shot himself in the head with a prop pistol loaded with a blank cartridge; hewas declared deadsix days later. In1994, the Magellan space probe ended its four-year mapping mission of Venus, apparently plunging into the planet&#39;s atmosphere. In1999, Pakistan&#39;s military overthrew the democratically elected government of Prime Minister NawazSharif. NBA Hall of FamerWilt&quot;The Stilt&quot; Chamberlain died at his Los Angeles home atage 63. In2000, 17 sailors were killed in a suicide bombattack on the destroyer USSCole in Yemen. In2002,bombsblamed on al-Qaida-linked militants destroyed a nightclub on the Indonesian island of Bali, killing 202 people, including 88 Australians and sevenAmericans. Ten years age:TheSeattle Storm won their first WNBA title with a 74-60 victory over the Connecticut Sun. Five years age:Addressing the Northern Ireland Assembly, Secretary of State Hillary Clinton urged rival leaders of the power-sharing government to keep making their coalition work for the sake of lasting peace. Americans Elinor Ostrom and Oliver Williamson won the Nobeleconomics prize. Oneyear age:Cyclone Phailin struck the east coast of India, destroying hundreds of thousands of homesand causing hundreds of millions of dollars in crop damage;somefour dozen people arebelieved to have died.

ut a rwin etter,ear com uteru or ra s A letter by Charles Darwin on the sex life of barnacles and a still-working vintage Apple computer — one of only 50 made in Steve Jobs&#39; garage in 1976 — are among the unique pieces of science history up for auction this month. By Ula Ilnytzky

NEW YORK — Buyers at a Oct. 22 event at Bonhams will

on the secret World War II

oxide and is among the items

scientists on the secret World

War II bomb project from radiation. &quot;It&#39;s the first time a full window from the Manhattan Project hascome on the market,&quot;

computer is estimated to bring

said Cassandra Hatton, Bonhams&#39; specialist on the history of science.

Photos submitted by Bonhams via The Associated Press

The auction also has a wide A What&#39;s most important on this 1876 letter up range of globes and other tech- for auction Is the signature of Charles Darwin. nological instruments. They The letter, by Darwin to a colleague, is on thesex include the earliest electric life of barnacles; It has a pre-sale estimate of keyboard, a rare 1905 Helmholtz sound synthesizer with a

tor and general editor of the

have been documented as operational, with one selling at auction last year for $671,000.

pre-sale estimate of $20,000 to $30,000. of artifacts as much as their Darwin Manuscripts Project Hatton says this i s B o n- material value,&quot; added Sar- at the American Museum of hams&#39; first sale in New York ah Lichtman, director of The Natural History. &quot;It&#39;s Darwin&#39;s of artifacts of s cience and New School&#39;s master&#39;s degree passion for the meaning of technology, which hasbecome program in the history of dec- sex,&quot; Kohn said. a growing area of interest orative arts and design. In the letter, estimated to among tech-savvy buyers. A letter from Charles Dar- bring $20,000 to $30,000, Dar&quot;I think increasingly things win in 1857 to a colleague win says he wants to learn — the stuff of our world — is about barnacles is &quot;classic more about the sex act of bara ttracting c o l lectors w h o Darwin&quot; and &quot;definitely amus- nacles, such things as &quot;were consider and value the his- ing,&quot; said David Kohn, direc- the specimens under water torical and cultural context

at times&quot; and &quot;if the recipient

ing, fishing and finding the exact significance of it.&quot; Kohn said there&#39;s a big market for Darwin letters. Added Lichtman: &quot;All I can say about that is: Sex sells.&quot;

things — the stuff of our world — is

attracting collectors who consider and value the historical and cultural context of artifacts as much as their material value.&quot; — Sarah Lichtman, with The New School, a liberal arts university In New York

More from theManhattan Project: Filesreleased, 50-plusyearslater &quot;This was a landmark case in U.S. history and Cold War history. tt represents a high point during anti-communist anxiety and tarnished the reputation of America&#39;s leading scientist.&quot; — Steven Aftergood, director of the Project on Government Secrecy for the Federation of American Scientists, following the release of documents involving J. Robert Oppenheimer

good said. Most of the material would be of more interest to

After the Manhattan Proj-

tute for Advanced Study until he retired in 1966.

ment program for the atomic bomb during World War II. Oppenheimer was the star of closed-door hearings In the next decade,

during the Cold War&#39;s anti-communist scare. By Russell Contreras

son later tried to erase the

both been communists and he had contributed to communist

After more than half a century

of intrigue and mystery, the U.S. Department of Energy has declassified documents

later accused of having communist sympathies. The department last week

released transcripts of the 1950s hearings on the security clearance of J. Robert Op-

Steven Aftergood, director of the Project on Government Secrecy forthe Federation of American Scientists, said the

release of the documents finally lifts the cloud of secrecy on the Oppenheimer case that has fascinated historians and scholars for decades.

&quot;This was a landmark case in U.S. history and Cold War history,&quot; Aftergood said. &quot;It represents a high point during

penheimer, providing more anti-communist anxiety and insight into the previously se- tarnished the reputation of cretworld that surrounded de- America&#39;s leading scientist.&quot; velopment of the atomic bomb and the anti-communist hysteria that gripped the nation

The Energy Department had previously declassified portions of the transcripts but

amid the growingpower of the with redacted information. Soviet Union. Aftergood, who had only Oppenheimerled the Man- scanned the hundreds of paghattan Project at Los Alamos es of newly declassified mateNational Laboratory, which rial, said the documents prodeveloped the atomic bombs vided more nuanced details dropped on Hiroshima and about the development of the Nagasaki during World War atomic bomb, debates over the II. The secretive projects in- hydrogenbomb and reflection volved three research and on atomic espionage. p roduction facilities at L o s The documents also show Alamos, New Mexico, Oak Ridge, Tennessee, and Hanford, Washington. The once-celebrated physicist lost his security clearance following the four-week, closed-door hearing. Officials also alleged that Oppenbendbujletin.com

heimer&#39;s wife and brother had