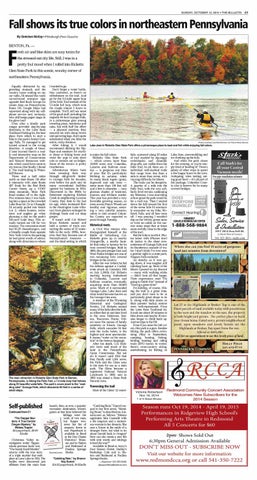 resh air and blue skies are easy tonics for the stressed-out city life. Still, I was in a pretty foul mood when I rolled into Ricketts Glen State Park in this scenic, woodsy corner of northeastern Pennsylvania. Equally distracted by my growling stomach and the country tunes wailing on my

refreshment on the trail. And go for the 3.2-mile upper loop

carved-wood entrance sign opposite Red Rock Scoops ice cream shop on Pennsylvania Route 118. Google Maps had vaporized along with my cellphone service and, seriously, who still keeps paper maps in the glove box? Even after a kindly park ranger provided step-by-step directions to the Lake Rose

7.2-mile full loop, which took complete. You&#39;ll still see most of the good stuff, including the majestic 94-foot Ganoga Falls, in a picturesque glen among towering pines, hemlocks and oaks, but with half the effort

— a physical exertion, they assured me with damp brows and quivering legs, that&#39;s quite

it. The road leading to Waterfall Heaven. T hree and a h a l f m i l e s north on state Route 118 after it intersects with state Route

Five minutes later, I was backing into a space at the crowded Lake Rose lot. Or so I thought:

mers and anglers go when planning a day on the park&#39;s 245-acre Lake Jean. This actually turned out OK for two

reasons: The concession stand had $3.25 cheeseburgers, and a friendly couple from upstate New York I met in the parking lot had great words of advice, along with directions to where

the couple almost 3 hours to

place from which to start a hike to the park&#39;s famed Gan- substantial when you hike the oga Falls, I&#39;d managed to get entire, rocky distance. turned around in the wrong After hiking it, I w ould direction. A couple of times. recommend ditching the flip(I later learned there&#39;s a real- flopsand sneakers for sturdily cool interactive map on the er shoes or hiking boots and Department of Conservation resist the urge to take short and Natural Resources web- cutsor venture outon ledges. site, which could have come to Some of the terrain is pretty my rescue.) But finally, I found treacherous.

steep mountain, Main Park Road snakes off to the right.

of the Falls Trail instead of the

487 gook for the Red Rock Corner Store), up a VERY

to enjoy the fall colors. Ricketts Glen State Park — which covers more than

13,000 acres over Columbia, Luzerne and Sullivan counAdventurous hikers have ties — is gorgeous any time been sweating their w ay of year. But it&#39;s particularly through old-growth timber fetching in autumn, when to Ganoga Falls for decades, its many black tupelo (gum), even before the park and its dogwood and oak treesmany recreational facilities some more than 100 feet tall opened for business in 1944. and 4 feet in diameter — turn Discovered in the 1860s by gloriousshades of brick-red, fishermen exploring Kitchen maroon and brilliant scarlet. Creek in neighboring Luzerne This year has provided a very County, they date to the last favorable growing season, so ice age, when increased flow trees across Penn&#39;s Woods are in the Huntington Lake tribu- healthy and vigorous, assurtary from glaciers enlarged its ing a very colorful autumn; drainage basin and cut deep colors in and around Columgorges. bia County are expected to It wasn&#39;t until CoL Robert peak through Tuesday. Bruce Ricketts named and built a system of trails connecting the series of 22 water-

distinguished himself at the

ever, that they became one of

Pennsylvania&#39;s treasuresand the ideal setting in which

Ricketts grew up in nearby Orangeville, a nearby ham-

falls, scattered along 26 miles Lake Jean, snowmobiling and of trail marked by zig-zaggy ice climbing up the falls. switchbacks an d d r a m atic And when the park closes drop-offs, are visible from the for the evening, or you&#39;re simFalls Trail. In all, there are 11 ply tired of hoofing it? There&#39;s individual well-marked trails plenty of other ways to spend that range from less than a a few happy hours in the area. mile to more than seven, with Antiquing, wine tasting, eatvarying difficulty for hikers. ing good food — it&#39;s all part of The trails can be deceptive. the package.Columbia CounA quarter of a mile into the ty also is known for its many Falls Trail, with the very soft, covered bridges. fairly level terrain cushioning my Mizunos, I was marveling at how great the path would be for a trail run. Then I started down the hill toward the first of the seven falls I&#39;d eventual-

ly encounter on my hike, Mohawk Falls, and all bets were off. I was praying I wouldn&#39;t slip on the velvety green moss or twist an ankle on the narrow stone steps that at times of the trail. But the hike is worth it. Pho-

many of the falls after the Indi- the Lake Rose Trailhead lot,

an tribes that at one time lived in the area: Delaware, Seneca, Zlrscarora, Huron. 0th-

do justice to the sheer awe-

someness of Ganoga Falls and twin covered bridges. Built in itsthunderous cascade ofwa1884, the picturesque East and ter. I don&#39;t think I&#39;ve ever seen West Paden bridges are one of a prettier sight in a state park, two remaining twin covered Niagara Falls excluded. bridges in the country. As sketchy as it was goAfter the war (where he led ing down, it was tougher still the defense against a Confed- climbing back up. Most of the erate attack on Cemetery Hill hikers I passed on my descent on July 2,1863), Col. Ricketts — many with walking sticks starting buying timberland — didn&#39;t look all that happy. in Columbia, Luzerne and Their expressions read &quot;I&#39;m Sullivan counties, eventually going to finish this&quot; instead of acquiringmore than 88,000 &quot;Having a great time!&quot; I&#39;m kidding, of course. Hikacres. Much of it surrounded Ganoga Lake, Lake Jean and ing the trail is a great time, what would become known as and you don&#39;t have to be in the Ganoga Glen area. particularly great shape to do A member of the Wyoming it. Along with kids (some on Historical an d G eological their parents&#39; backs), seniors

seem awfully close to the edge

let that today is famous for its

it took me about 30 minutes to

hikedown and maybe 10minutes longer to climb back up.

ers wear the names of family And no trips to the ER. members or friends. Ganoga Even if you miss the fall colFalls, which cascades 94 feet ors, this park is a gem. Besides onto the rocks below, is the hiking, the park offers swimhighest and most spectacular. ming (May to September), It means &quot;water on the moun- camping, boating, fishing, tain&quot; in the Seneca language. birding, hunting and riding After his death, Col. Rick- trails (BYO horse). In winter, etts&#39; heirs sold much of the there&#39;s cross-country skiing, land to t h e P ennsylvania snowshoeing, ice fishing on

the Falls and the Glens area r

to the state for use as a state park. The Glens became a registered National Natural

Landmark in 1969, and in The main attraction in Ricketts Glen State Park in Benton, Pennsylvania, is hiking the Falls Trail, a 7.2-mile loop that follows along 22 beautiful waterfalls. The park&#39;s crown jewel is the &quot;wedding cake&quot; Gonoga Falls, which descends 94 feet in a series of

recreation destination. Investigators at that time believed the

killings were the ~ pper

bodies were discoveredjust offshore from the main boat

a life long-lost and a mysterious woman in her dreams. She sees a future in the smile of a

Welcomes New Subscribers for the 2014 Season

stranger there, but what to do

at the Des Chutes Historical Muse-

of a triple murder that took

nows her list of suspects down to one. Paperback is available in Bend

about Gerald back in Oregon&#39;? How can she create a new life with only words and inklings um and in Sisters to lead the way?&quot;

returns with the true story

Bookshop Cafe and in Sisters and Redmond at Paulina