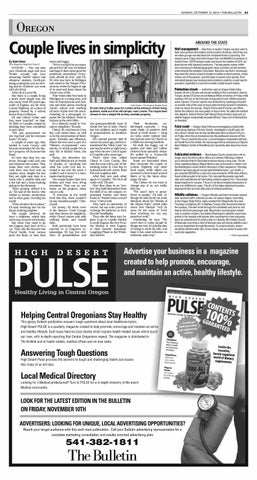 EUGENE — You can take

horse and buggy. &quot;We&#39;re tryingto be an example and live the way we believe and hope it does some good for somebody somewhere. Everybody should do that,&quot; said Eli, 60, who was born in Michigan

whatever modern, Earth-polluting contraption you are driv- and raised in the Tampa, Floriing and do whatever you want da area, where he began at age with all of that.

13 to read and learn about the

After all, it&#39;s your life. Amish way of life. But there is a couple living That would take him back to a much more simple way, the M ichigan as ayoung man, and way many lived 150 years ago, then to Pennsylvania and Indisouth of Eugene, not far from ana andother places,teaching Lorane Highway, on a piece of Amish school and working property owned by a retired all sorts of jobs over the years, doctor from California. including as a newspaper reEli and Cheryl Cutler said porter for the Elkhart Truth in they were &quot;married&quot; on Sept. Indiana in the mid-1980s. It&#39;s a lifestyle rooted in &quot;vol10, 2010, in Coquille, simply by deciding they were committed untary simplicity,&quot; Eli said. to each other. Cheryl, 53, was born in Coos &quot;We just pronounced we Bay and raised there, as well are &#39;married&#39; and let everyone as in the communities of Reedknow,&quot; Eli said. sport, Yoncalla and Silverton, A couple of years ago, they where she was once a part of a landed in Lane County and &quot;Hebrew re-enactment&quot; combecame caretakersforthe doc- munity, in which people live as tor&#39;s property off Summerville they did in biblical times, she

quarters, made out of anoldcamper, near Lorane. The couple have chosen to live a simple life as they caretake property. one great-grandchild, most of whom live out of state. Cheryl has two children and a couple of grandchildren in Southern Oregon.

coats made of painter&#39;s cloth

found at thrift stores — hang on racks under outdoor shel-

ters and are sewn by Cheryl on a 1950s-era sewing machine. Eli built the buggy out of spokes and hubs and rubber orderedfrom speciality shops. It&#39;s pulled by a 14-year-old That&#39;s what t h e y c a l led horse named Whiskey. Cheryl in Coos County. She Some arefascinated when said she even sold a pair of her they encounter the couple on walking sticks in Coos Bay to Lorane Highway and other husband-and-wife actors Brad local roads, while others are Pitt and Angelina Jolie. annoyed tohave to pullaround After they saw each other them, or by the horse dropagain in Coquille, &quot;We hit it off pings, Eli said. really well,&quot; Eli said. The Cutlers do not want to Now they sleep in an &quot;eco- change any of us, not really, hut&quot; theybuilt themselves from theysay. &quot;We aren&#39;t here to prosethe shell of an old camper, repurposed lumber and items lytize to people,&quot; Eli said, alfound in &quot;freebie boxes around though he does hand out some town,&quot; Cheryl said. literature about the &quot;Monks of They have no electricity, of the Mystic Path,&quot; which talks course, but use solar power to about how lifestyle &#39;will do recharge the batteries on their more for the cause of Truth bicycles&#39; headlights. than anything we can say, They ride the bikes into Eu- preach or write.&quot; gene, to go to Capella Market Continuing, he says: &quot;We in south Eugene, the New Fron- aren&#39;t here to make people do tier Market in west Eugene, things our way. It&#39;s just the idea cancer sixyears ago, and he rememberedthe &quot;Stick Lady&quot; he met maybe seven oreightyears ago when he saw Cheryl again in Coquille a fewyears ago.

Today, she describes her

doors, through wind and rain faith and lifestyle not as Amish and whatever else comes. They or Quaker or &quot;anything but make their own clothes and what the Lord God has recook their own food over an vealed to me over the years. I outdoor stove, despite the fact couldn&#39;t nail it down to a manthey are right next door to a made church group.&quot; home with a satellite dish and The couple makes their own a hot tub and a fancy-looking clothes and their own living pickup in the driveway. structures. They use an out&quot;She&#39;s actually offered it to house on the property when us,&quot; Eli said of the doctor, who nature calls. &quot;If everyone in the world wishes to remain anonymous and is often gone, traveling the lived like this, there wouldn&#39;t world. be any homeless people,&quot; Cher&quot;I&#39;d be afraid to live in there,&quot; yl said. Eli said, breaking into his haFor money, Eli feeds cows bitual, honking laughter. at the Spencer Creek Grange The couple, however, do and does chores for neighbors, have a cellphone, which they while Cheryl makes and sells use to stay in touch with family. walking sticks and Amish But when they need to go dolls. into Eugene, they don&#39;t drive a Both previously have been car. They ride the bicycles that married or in long-term re- or their f avorite restaurant, of trying to walk the talk, and Cheryl builds from various lationships. Eli has five chil- Laughing Planet in the White- hope it has some influence on parts she finds, or take their dren, 15 grandchildren and aker district. someone, some way.&quot;

and healthy lifestyle. Each issue features local stories which explore health-related issues which touch our liVeS, With in-dePth rePOrting that Central OregonianS eXPeCt. The magaZine iS diStributed in The Bulletin and at health OutletS, mediCal OffiCeS and on area raCkS.

Answering Tough Guestions High DeSert PulSe PrOVideS the anSWerS to tOugh and Challenging health Care iSSueS that many of US Will faCe.

LOOking fOr a MediCal PrOfeSSiOnal? Turn to PULSE fOr a in-dePth direCtOry of the area&#39;S