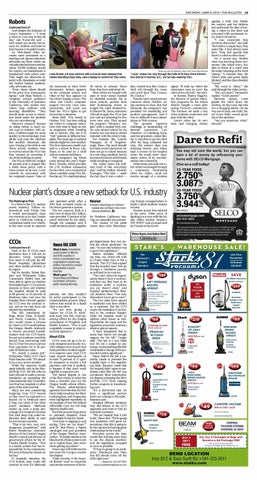 The Washington Post In a blow to the U.S. nuclear power industry, Edison International said Friday that it would permanently close two reactors at its San Onofre plant in California, ending a contentious battle over whether the units could be repaired

and operated safely after a 2012 leak revealed cracks in the steam generator system. The two reactors, built at a total cost of about $2.1 billion, once provided 17 percent of the power delivered by the utility, though the company said it could maintain power supplies

can Energy scrapped plans to build a small modular reactor in Iowa. Nuclearpower foes rejoiced at the news. &quot;After years of fighting toe-to-toe with the billion dollar nuclear industry, WE WON!&quot; said an email sent by Friends of the Earth.

Where Buyers And Sellers Meet

sAVE On Miele Vacuums

around furniture, corners and other obstacles Lightweight

Storewide savings on the

Buy Any 2 Packages of Bags and Receive a 3rd Package FREE witH COUPON. EXCLUDES MIELE. OF EQUAL OR LESSER VALUE. EXPIRES 7/31/13