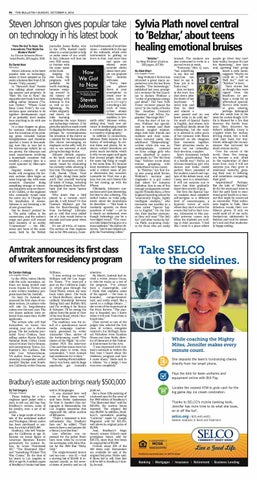 on technology inhislatest book &quot;How We Got To Now: Six Innovations That Made the Modern World&quot;

ica had thousands of local time

zones — intolerable in the age

about in a safari jacket to help

us make sense of our world. In fact, Johnson will host his

of the railroads, which were instrumental in getting us

the same name Steven Johnson, in his latest as his book. popular take on technology, J udging b y seems to have adopted as his that book, the motto a famous line from E.M. programs will Forster: &quot;Only connect.&quot; probably be worth watching,

was talking about connecting passion and propriety. In

because romping around in the history of technology with Johnson is fun as well as enlightening. He writes elegantly

&quot;How We Got to Now,&quot; the

of us probably don&#39;t realize wide learning have anything to do with one to illustrate the ways history another. and technology interact. If he In a clear chapter on glass, gives the latter too much credit for instance, Johnson shows in shaping the former, as when how the invention of the print- perhaps he overemphasizes ing press revealed human the invention of the mirror as farsightedness and therefore a catalyst for the Renaissance spurred a boom in lens-mak- (the mirror encouraging an ing, how this in turn led to emphasis on the self), well, it&#39;s the microscope (which let us nice to see someone at least see germs), the telescope and giving technology its due. some experiments involving Johnson cleverly organiza homemade crossbow that es his book around six key resulted, a century later, in a areas of innovation, each a world spanned by fiber-optic handy vessel for channeling cables. his curiosity while allowing it Regular readers of such free rein. The topics are Glass, books will recognize the for- Cold, Sound, Clean, Time mat: sections often begin on and Light. Along these paths some long-ago day with some you&#39;ll find yourself learning eccentric character doing all kinds of things, including something strange or innocu- the origins of neon, Sears Roeous, but pretty soon we discov- buck and the name &quot;sperm er it&#39;s Galileo, or the engineer whale.&quot; who eventually would raise

the entire city of Chicago for the installation of sewers. Johnson is not breaking a lot

of new ground here. But he doesn&#39;t pretend he

bruised. The students are

also instructed to write in a journal twice at week.

down to four. And since time

own PBS series in October with

mean more people can pinpoint their

with ease. &quot; Every

ian to declare Wolitzer a

&quot;writer of prodigious energy and detail.&quot; The New York Times&#39; reviewer placed the

From the start of her career, Wolitzer has special-

adding that, &quot;each new advance in timekeeping enables a corresponding advance in our mastery of geography.&quot; In addition to connections, Johnson finds lessons in the

history of technology. In certain times and places, for in-

mothers and theirsometimes tortured paths i n to adulthood. &quot;Sleepwalking,&quot;

written while she was an

pretty much inevitable, which is why we see again and again

on three college girls who were absorbed in poetry

that several people think up

and death. In &quot;The Ten-Year Nap,&quot; Wolitzer wrote about

the same big thing at roughly the same time. It&#39;s because most inventions can&#39;t happen

until a critical mass of prior discoveries has occurred.

Leonardo da Vinci was a genius, but you can&#39;t blame him for not coming up with the iPhone.

he describes — &quot;this book is resolutely agnostic on these questions of value&quot; — yet he

people go when they can&#39;t take reality, because it&#39;s just too depressing,&quot; Jam says &quot;Everyone,&quot; Mrs. Q. says, and, agreeing their group &quot;has something needs a code name, to say. But not suggests &quot;Maybe we everyone can could do a riff on &#39;Bell Jar.&#39;&quot; And so b ear to say i t . &quot;Belzhar&quot; is born. Your job is to find a way.&quot; Their stories feel Jam, we learn as though they were at the start, has r ipped f ro m t h e shut down after headlines (or perthe death of her haps a script for an boyfriend: &quot;I afterschool special). loved him and Sierra&#39;s little brotht hen h e di e d er goes m i ssing, and almost a perhaps kidnapped year passed and no one after she sends him to the knew what to do with me.&quot; store for cookie dough. GrifFor much of Special Topics fin is blamed for a fire that in English, Jam shares only destroys the family busisuperficial details about the ness. Marc discovers his relationship, but the read- father&#39;s infidelity. Casey is er is allowed to relive parts crippled when her mother, of her romance with Reeve driving drunk, hits a wall. Maxwell as she imagines And Jam loses her boytheir moments t ogether. friend, although the circumTheir attraction seems instances that surround his tense but not unhealthy; death remain murky. their devotion, complete. Over the course of the Jam&#39;s classmates include novel, these five teenagGriffin, good-looking &quot;but ers become a u n it, a l lied

attracted a great many superlatives over the last three

is clearly an enthusiast, even connections, and the author&#39;s out of a lake would freeze in though technology can be a range and gusto will remind seconds and taste great when two-edged sword. &quot;The vacubaby boomers of an earlier defrosted. um tube helped bring jazz to a &quot;Connections&quot; — the B B C It&#39;s not all trivia, of course. mass audience,&quot; the author obseries and book of the same The section on time explains serves, &quot;and it also helped amname, both b y t h e B r i tish that in the 19th century, Amer- plify the Nuremberg rallies.&quot; is. The point, rather, is the

clocks housed in satellites in low-

W ho k new t h a t a bi r d butthey&#39;re also sobering.The placed in a vacuum won&#39;t author makes no value judgjust die, it will freeze&#39;? Or that ments about the innovations

Clarence Birdseye got the idea forflash-freezing food from ice-fishing&#39;? Labrador got so cold that trout pulled

in a hostile way&quot;; Sierra, an

in the exploration of their inner lives. And, it will not

surprise you, they grow in emotional maturity, gropay into young adult fiction, the student council and cap- ing their way to defining, W olitzer&#39;s n a r r ator an d tain of the debate team; and and sometimes conquering, ringleader is a girl called Casey, new to a wheelchair. their grief. Jam (short for J amaica) It will not surprise you to Inspirational? Perhaps. Gallahue. Jam is one of five learn that they gradually But the kids of &quot; B elzhar&quot; teenage protagonists attend- share their stories of pain. do for the most part seem to ing the Wooden Barn, a New But first, the Special Top- find the path back to emoEngland boarding school for ics students must somehow tional good health in a man&quot;emotionally fragile, highly self-navigate to a different ner that might be construed intelligent students,&quot; who level of consciousness, a as convenient. Their sullenencounter one another in a hypnotic trance of sorts ness begins to fade, their class called &quot;Special Top- where they start to relive the delusions recede, their conics in English.&quot; On the first events that led to their trau- fidence grows. If only we day, their teacher announc- ma. Admission to this par- could send all of our surly, es they will read &quot;The Bell allel universe comes only freaked-out adolescents to Jar&quot; and other works by Syl- when the students are writ- Belzhar and wait for semesvia Plath, surprising choic- ing in their journals. &quot;I feel ter&#39;s end and that moderatees for those who are easily like I went to a place where ly happy ending. In &quot;Belzhar,&quot; her first for-

Take SELCO to the sidelines.

attention. By March, Amtrak had in-

vited a writer, Jessica Gross, les Times. &quot;I&#39;ve reserved a to ridethe trains as a testof thors are being invited onto spot on the California Zeph- the program. &quot;I&#39;ve always trains thanks to Twitter and yr, which goes through the been a claustrophile, and a new writers residency pro- Great Plains, where my next I think that explains some gram launched by Amtrak. book takes place. The book of the appeal — the train is is &#39;Blood Brothers,&#39; about the bounded, c o mpartmentalOn Sept. 24, Amtrak announced thefirst class of res- unlikely friendship between ized, and cozily small, like a ident writers, 24 authors who Sitting Bull and Buffalo Bill, carrel in a college library ...&quot; will ride its l ong-distance and I&#39;m writing it for Simon she wrote of the experience at routes over the next year. The 5 Schuster. I&#39;ll be seeing the the Paris Review. &quot;The jourtwo dozen authors were se- plains from the point of view ney is bounded, too: I know lected from more than 16,000 of the Iron Road, which I hav- when it will end. Train time is en&#39;t done before.&quot; applicants. found time.&quot; The writers who will find The residency was the reChee served as one of the themselves on trains this sult of a spontaneous social judges who selected the first coming year are a diverse media campaign inadver- class of writers, alongside group. The list includes jour- tently generated by writer Amtrak&#39;s Joe McHugh, Samnalist Farai Chideya, best- Alexander Chee, author of uel Nicholson from Random selling author Karen Karbo, the forthcoming novel &quot;The House and Amy Stolls, direcNational Book Critics Circle Queen of the Night.&quot; In a De- tor of literature at the Nationrode the rails; nowadays, au-

Chee said that trains were his

While caaching the Nighty Nites, Jennifer makes every minute count.

al Endowment for the Arts.

&quot;I was impressed with Am-

trak&#39;s outreach to writers the

first time I heard about the residency program and how it came about,&quot; Stolls said in

She deposits the team&#39;s fundraising checks directly from her smart phone.

a release. &quot;As a judge, I was won over completely.&quot;

Pays the bills for team uniforms and equipment online with Bill Pay.

&quot;I was shocked how well But a Dean Ellis painting of some of these items went,&quot; a tattooed man for the cover of said Sam Heller, spokesman the 1969 edition of Bradbury&#39;s for Nate D. Sanders Fine Au- &quot;The Illustrated Man&quot; sold for tographs 8 Memorabilia, the $45,894, the auction house Los Angeles enterprise that reported. The original bid organized the online auction was $6,000. In addition, Bradbury&#39;s surrealistic painting of 460 pieces. &quot;That&#39;s a testament to how &quot;Carnival,&quot; made by Joseph enthusiastic Ray Bradbury Mugnaini, sold for $23,153, fans are,&quot; he added. &quot;They well above its original price of seem tohave a real passion for $2,500. a literary icon like him.&quot; And, B radbury&#39;s H ugo Less affection was ex- Award, science fiction&#39;s most pressed forthe jacket Brad- prestigious honor, sold for bury wore while he co-wrote $28,734, more than five times the screenplay with John Hus- its original bid of $5,000.

Bradbury&#39;s version, some of his jewelry, even a set of oil paints.

But a large swath of the estate of the acclaimed author and Waukegan, Illinois, native has been purchased at auction, for a total of $493,408. Bradbury, who left Wauke-

gan for California at age 13, became an iconic figure in American literature. Known

and &quot;Something Wicked This Way Comes.&quot; By the time of

The single-breasted brown and tan coat — size 42 — had

460 items sold. Remainders are available for sale at the

original bid price, Heller said. If those fail to sell, their fate

Thanks to SELCO&#39;s mobile banking tools, Jennifer has more time to do what she loves, on or off the turf. SelCO.Org / SOO-445-44S3 Several locations in Bend and Redmond