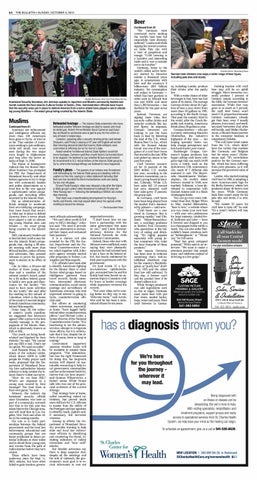 Continued from A1 &quot;We

a hint of grapefruit and mango. &quot;Craft brewing is a lucrative and interesting

niche and it was a mistake not to do it earlier.&quot; Germany, home to the

Homeland Security Secretary Jeh Johnson speaks to reporters and Muslim community leaders last month outside the Noor Islamic Cultural Center in Dublin, Ohio. Administration officials have found that the security rules put in place to defend America from a terror attack have played a role in alienating young Muslims — the exact group being courted by the Islamic State.

have gone to Syria, or tried to so far. That number of Amer-

icans seeking to join militants, while still small, was never seen during the two major wars fought in Afghanistan and Iraq after the terror attacks of Sept. 11, 2001.

The threat of homegrown radicals like the Boston Marathon bombers has prompted the FBI, the Department of

a sophisticated online propaganda and recruiting effort mounted by the Islamic State.

But as administration officials attempt to accelerate

Beheaded hOStage —The Islamic State extremists who have beheadedanother Western hostage are deaf to reason and must be destroyed, British Prime Minister David Cameronsaid Saturday as Muslims worldwide were urged to pray for the victim on one of Islam&#39;s holiest days. Cameron, speaking after a security briefing at his rural retreat, Chequers, said Friday&#39;s slaying of 47-year-old English aid worker Alan Henning demonstrated that Islamic State militants were committed to inflicting horror for horror&#39;s sake. Asked whether hebelieved Islamic State fighters would kill morehostages,Cameronsaidtheywould havetobehunteddown to be stopped. Hedeclined to say whether Britain would extend its involvement in U.S.-led airstrikes on the Islamic State group to Syria, where the hostage killings are believed to havehappened.

their own lobbying campaign, they have found that security rules put in place to defend

ment officials acknowledge. &quot;We can&#39;t allow youth to fall have played a role in alienating young Muslim men and prey to ISIL&#39;s ideology,&quot; Johnwomen — the exact group son said. &quot;We need to provide being courted by the Islamic them an alternative to rechanAmerica from aterror attack

so fearful their youths may fol-

It is a clarion call also

sounded by the FBI, the Jus-

ganda that, during a 90-min- tice Department and the Naute meeting with more than tional Counterterrorism Cen60 local leaders, police officers

ter, which together with John-

suspected terrorists. &quot;I don&#39;t know how we can

have a partnership with the same government that spies

on you,&quot; said Linda Sarsour, a dvocacy director for t h e N ational Network for A r a b

Indeed, those who met with Johnson were conflicted, some

saying they were pleasantly surprised he had traveled here

and advocates, they pressed son&#39;s agency recently started Johnson to prove the govern- pilot programs in Boston, Los ment is sincere in its offers of Angeles and Minneapolis. help. U.S. officials have been able Lila Al Sibai, a 28-year-old to identify Americans fighting mother of three young chil- for the Islamic State or other dren and a member ofthe Syrian rebel groups based on culturalcenter&#39;sboard,asked intelligence gathered from for a $4 million federal grant travel records, family memto build a new gym and class- bers, intercepted electronic rooms for the facility. &quot;We communications, social media need to have more activities postings and surveillance of for our youth,&quot; she said after Americans overseas who had the meeting in this suburb of expressed interest in going to

to put a face on the federal ef-

Columbus, which is the home

fort, but clearly embittered by their past experiences with the government. Dr. Iyad Azrak, 37, a Syrian-American ophthalmologist, recounted how he and his

while inspectors reviewed his records.

&quot;Not once when we&#39;re coming home do they say to me,

who said he has been a natuof the country&#39;s second-largest cials said. Somali-American community, But efforts at countering ralized citizen for six years. behind Minneapolis. violent extremism, especially Omar Saqr, 25, the cultur- at home, &quot;have lagged badly al center&#39;s youth coordina- behind other counterterrorism tor,suggested that Johnson&#39;s pillars,&quot; said Michael Leiter, a agency offer a prize to the best former director of the National counter message to the pro- Counterterrorism Center. &quot;It is paganda of the Islamic State, heartening to see the adminwhich is alternately known as istration attempt to invigorate ISIS or ISIL.

ago, is synonymous with beer and the country&#39;s 8 billion-euro ($10 billion) ny,including Lemke, produce industry. Yet consumption their drinks after the purity and output in Germanylaw. which has beer gardens in With a wider choice of other cities such as Munich that beverages to buy, beer has lost can seat 8,000, and more some of its status. The average than 1,300 breweries — has

declined for the past seven years. Instead, Germans are sipping more wine, Italian-style coffee drinks and summer cocktails like Aperol Spritz. In response, G erman b r eweries a r e looking to put t h e b u zz

back in beer by following the lead of the U.S., where Boston Beer Co. Inc., which

sells the Samuel Adams brand, was one of the insti-

past five years. Craft brewers accounted for 14 percent of the

Family&#39;S PleaS —The parents of an Indiana manthreatened with beheading by the Islamic State group arepleading with his captors to free him, saying in avideo statement Saturday that their son hasdevoted his life to humanitarian work andaiding Syria&#39;s war refugees. Ed and PaulaKassig&#39;s video was released aday after the Islamic State group&#39;s online video threatened to behead 26-year-old Peter Kassig next — following the beheading of British aid worker Alan Henning. That video was aheartbreaking development for Kassig&#39;s family and friends, who hadstayed silent since his capture while working to secure his release.

those efforts, but it is unfortunate that it has, despite the ef-

$100 billion U.S. market last year, according to the Brewers Association, an in-

beer may still be an uphill struggle. Micro breweries currently produce 1 percent of German output, according to the DBB, the German brewers&#39;

association. While that may lons of beer a year, down from grow to as much as 3 percent, more than 36 gallons in 1991, the craft beer boom w on&#39;t according to the Barth Group. reach U.S. proportions because German drinks about 28.3 gal-

That puts the country third in

the world, after the Czech Re- get their beer, even if mostly public and Austria. Americans pilsners, from small- and medidrink about 20 gallons ayear. um-sized breweries that often German brewers — who are sell locally, said Stefan Huckecurrently celebrating Munich&#39;s mann, a Munich-based partner Oktoberfest, the i ndustry&#39;s in the consumer business at highpoint of the year — are consultancy Deloitte. &quot;The craft beer trend comes hoping specialty beers can help change perceptions and from the U.S., which didn&#39;t lure back buyers year-round. have the variety that markets Radeberger Gruppe, Ger- like Germany and Belgium many&#39;s largest producer, has had for many years,&quot; Huckebegun selling craft beers with mann said. &quot;It&#39;s nevertheless price tags that can reach 24.99 positive for the German mareuros a bottle, such as the ket, which has been suffering dark-brown 17th Anniversary from price pressure, as it will Ale, made of 7 different ales increase the perceived value of matured in oak. The Bayeri- beer.&quot; sche Staatsbrauerei WeihenLemke, who started making stephan, the w orld&#39;s oldest craft beer in 1999, is adopting a brewery started in 1040, now more American-style logo for markets &#39;Infinium,&#39; a beer de- his Berlin brewery, where he&#39;s veloped in cooperation with produced about 40 brews over Samuel Adams sold in a black the years. While Germany champagne bottle. back then wasn&#39;t ready for his You can go even more indi- pale ales and stouts, it is now, vidual than that. Holger Wirtz he said. &quot;We waited 15 yearsfor in May started Bierzuliebe,

ed by pilsners — until now.

&quot;Craft beers are a new trend in Germany that is

you can create your own beer

craft beer to take off,&quot; he said. &quot;It&#39;s a trend I believe will stay

— with your own preferences

for hops intensity, alcohol levabeth M e yer-Renschhau- el, liveliness and color — have sen, a sociology professor it brewed and shipped to you at Berlin&#39;s Free University in a champagnebottle within a who specializes in the his- week. You can also order Biertory of eating and drink- zuliebe&#39;s house creations such ing. &quot;It&#39;s highly popular as &quot;Kehlenglueck,&quot; or &quot;Throat especially with young ur- Joy,&quot; for 9.95 euros. &quot;Beer has great untapped ban consumers who value the local footprint of these potential,&quot; Wirtz said in an interview. &quot;We want to make a premium product that people

One reason Germany has been slow to embrace enjoy and celebrate instead of something that&#39;s well-es- downing in a few gulps.&quot; tablished elsewhere may be the country&#39;s Reinheitsgebot, or &quot;purity law,&quot; draft• e,

food law still enforced. To this day, a b rewer can&#39;t

call his product beer if he doesn&#39;t adhere to it. While foreign producers can add ingredients such as rice or sugar, Germans must make beer with just

&quot;Our youth are being hoodwinked and hijacked by their forts of many, been so long in rhetoric,&quot; he said. &quot;We cannot coming.&quot; just say ISIS is bad. That&#39;s not Government s u pporters an option. We need an outlet.&quot; question whether funds will And Hossam Musa, 34, the

be available to sustain these

imam of the cultural center, programs. &quot;The administrawhich draws 4,000 to 5,000 tion has the right framework people for Friday prayer each for doing this, but long-term week, proposed that the De- success will depend on suspartment of Homeland Secu- tainable resourcing to help lority hire authoritative Islamic

We&#39;re here for you thnughout the journeywhersver it may lead.

scholars to help combat the Is- and law enforcement build inilamic State&#39;s violent narrative. tiatives that can have impact,&quot; &quot;How do w e b e a t I S IL? said Quintan Wiktorowicz, a

What&#39;s our response to a young man wowed by their

former senior White House aide who was one of the prin-

message? You beat them at

cipal architects of the current

their own game,&quot; he said.

strategy. That strategy here at home,

homeland security official called countering violent exsince December, was here as tremism, has proved much part of a community outreach more difficult for U.S. officials tour that so far this year has

an illneSS ordiSeaSeCanbe deVaStating. But We&#39;re here to helP. With visiting specialists, rehabilitation and

to master than the ability of

taken him to the Chicago area, the Pentagon and spy agencies and will land him in Los An- to identify, track, capture and, geles, New York and other cit-

ies in the coming months.

overseas. Among its efforts, the De-

nerships between the federal partment of Homeland Secugovernment and the local law rity provides training to help enforcement, educational and

community groups that are ment officials in identifying better positioned to detect po- and countering the threat, intential militants in their midst cluding indicators of violent and to derail those young men extremism and &quot; l one wolf&quot; and women from the path of attacks. radicalization before they turn violent.

These efforts have been underway since the Sept. 11, 2001, attacks, but have often

there is deep suspicion that, despite all the meetings and the talk of outreach, the gov-

ernment&#39;s main goal is to refailed to gain traction, govern- cruit informants to root out