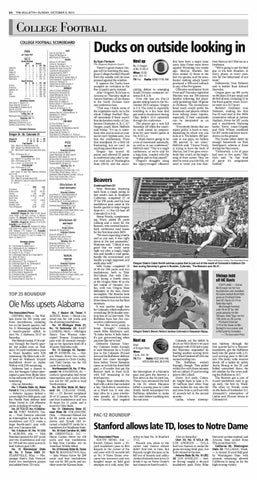 No. 2 Oregon There&#39;s a good chance Ore- at No. 8 UCLA gon will be watching the inaugural College Football Playoff When:12:30 from the outside with its nose p.m., Oct.11 TV:Fox RacRD: KBND 1110-AM pressed against the window. It appears the Ducks have accepted an invitation to the

Pac-12 parity party instead. After Oregon&#39;s 31-24 loss to Arizona on Thursday night at Autzen Stadium, all six teams in the North Division have one conference loss. &quot;That was, I think, some of

the trepidation early on in the whole College Football Playoff movement if there wasn&#39;t

that declaration really of Conference Champion A, B, C, D,&quot;

Oregon coach Mark Helfrich said Friday. &quot;It&#39;s up to somebody else, and as soon as your record isn&#39;t hyphen-zero, you lose the (conference). From that standpoint it&#39;s a little bit

line have been a major issue then Marcus isn&#39;t Marcus as a since Jake Fisher went down freshman. &quot;We&#39;re going to put the best against Wyoming two weeks a go. Marcus M ariota h a s been sacked 12 times in the

guy in the best situation, in

every phase, at every posilast two games, and the once- tion for the betterment of our

produced a 100-yard tailback Defensively, Don Pellum&#39;s in any of the five games. unit is leakier than Edward ciating defeat to emerging Offensive coordinator Scott Snowden. South Division contender Ar- Frost said Thursday night that Oregon gave up 495 yards izona (5-0, 2-0). Mariota was not 100 percent on 86 plays (5.8 per snap) and Over the last six Pac-12 healthy following the physi- 29 first downs, including 13 in games dating back to the No- cally punishing Sept. 20 game the third quarter when Arizovember 2013 collapse, Oregon in Pullman. The second-year na went on a 21-7 spurt. is 3-3. The trend is especially head coach would prefer his R edshirt f r eshman A n u troubling to a fan base that assistants and players refrain Solomon, making his first got used to dominance during from talking about injuries, Pac-12 road start in the 100th Chip Kelly&#39;s 33-3 cakewalk especially if their comments consecutive sellout at Autzen through the conference. can be interpreted as an Stadium, threw for 287 yards The players got a rare fall excuse. and a touchdown. Running &quot;Everybody thinks that our backs Terris Jones-Grigsby Saturday off while the coaches work ahead on prepara- injury policy is hard or easy, and Nick Wilson combined tions for next week&#39;s game at depending on which way you for 207 yards and three touchNo. 8 UCLA. look at it. We believe 100 per- downs on the ground. &quot;I think there&#39;s going to be cent in our guys, we believe The Ducks either didn&#39;t do a ton of movement nationally, 100 percent in our team,&quot; enough homework on Rich as well as in our conference,&quot; Helfrich said. &quot;I know Frosty Rodriguez&#39;s scheme or froze Helfrich said. &quot;This is a tough is trying to have the back of during the final exam. &quot;Defensively, a lot of guys conference, as we&#39;ve said for Marcus, but if we gave everya long time, coupled with the body that crutch at the begin- had eyes in two spots,&quot; Heltoughest path to that playoff.&quot; ning of their career, &#39;Hey, we frich said. &quot; In t hat k i n d Oregon&#39;s struggles along need to wean you into this, we of game i t&#39;s a ssignment the injury-ravaged offensive need to wean you into that,&#39; football.&quot;

Beavers ContInued from 01 Sean Mannion, bouncing back from a rough outing in last week&#39;s loss at Southern California, completed 27 of

ing Ward, added 69 yards rushing and a score for the Beavers, who averted back-to-

back conference road losses for the first time since 2003. &quot;We were expecting a battle

and as you saw, it was right down to the last possession,&quot; Mannion said. &quot;I think it was

good that we could come right out after a tough, tough loss and handle a road game, handle the environment and handle a tough opponent and Photos by Brennan Linsrey I The Associated Press really play well.&quot; Oregon State&#39;s Caleb SmIth catches a pass that Ie just out of the reach of Colorado&#39;e Addison GilSefo Liufau completed 32 liam eurIng Saturday&#39;s game in Boulder, Colorado. The Beavers won 36-31. of 49 for 308 yards and two touchdowns, both t o T y ler

McCulloch. But with Colorado facing a fourth down at the Oregon State 40 in the

Alabama had a chance to win, but Senquez Golson inter-

Godwin Igwebuike had three in the end zone with 37 seconds interceptions and Justin Jackremaining. son ran for 162 yards to lead Also on Saturday: Northwestern. No. 1 Florida State 43, Wake No. 20 Ohio State 52, Marycepted a pass from Blake Sims

defenders in his face, threw incomplete. The Beavers took

moments. It was another tough loss

for Colorado, which endured a wrenching 59-56 double-over-

yards passing for the Vikings). NateTagoran for 106 yards on 26carries.

thy Coleman broke through

Donagh&#39;s two scores and a field goal by Gonzales. — The Associated Press

Colorado cut the deficit to

30-24 on Will Oliver&#39;s 44-yard field goal with 10:52 left to play but Mannion responded by leading another scoring drive

at Oregon State to sack Mannion for a 9-yard loss to the Colorado 29-yard When: line and the Buffaloes&#39; defense 7 p.m., Oct. 16 that Ward finished off with his KICE 940-AM, second scoring run. forced two more incomple- TV:FS1 Radio: KRCO 690-AM, 96.9-FM tions beforeTrevor Romaine The Buffaloes weren&#39;t came on to kick his third field through, though. They pulled goal, a 47-yarder that put the within five with three minutes Beavers back in front 23-21 his interception of a Mannion left on Liufau&#39;s 17-yard scoring w ith 6:47 remaining in t he pass and gave the Beavers a pass to McCulloch. third quarter. first down at the 34-yard line. Down 14-0 early, ColoraOregon State extended the Three runs advanced the ball do fought back to take a 21-

tion midway through the first quarter led to a Beavers&#39;

touchdown, got the Buffaloes back into the game with a 31yard scoring pass to McCulloch. The lanky wide receiver shook off a tackle by safety Justin Strong at the 20 and

bolted untouched down the left sideline for the score pulling the Buffaloes to 14-7.

The Beavers got a pair of 4-yard touchdown runs to go lead with a drive that included to the 24, where Mannion 20 halftime lead when Tony up early, the first by Ward. a key third-down conversion lofted a scoring pass to Caleb Jones bulled his way into the The other, by Woods, came on a Ward run. It was also Smith. Smith out-jumped two end zone from a yard out with on the heels of linebacker D.J. kept alive by a pass interfer- Buffaloes defenders to make 43 secondsleftin the second Alexander&#39;s interception of ence penalty on Colorado&#39;s the catch before tumbling into quarter. Liufau and 25-yard return to Ken Crawley that negated the endzone. Liufau, whose intercep- Colorado&#39;s 8.

an interception 41 yards for a for 95 yards and two touchtouchdown and TCU made a downs and 7yreek Hill rehuge fourth-and-1 stop with turneda kickoff97 yardsfora just over 3 minutes left. touchdown for Oklahoma State. No. 5 Auburn 41, IvIo. 15 LSU IvIo. 22 East Carolina 45, SMU 7: AUBURN, Al a. — Nick

and two touchdowns and ran

Bercovici as time expired, and Arizona State scored three TDs in the final 3:53.

had two chances to make the California 60, Washington game-winning field goal, but State 59: PULLMAN, Wash. end zone with 61 seconds left Koyack caught the pass as he both missed in the loss. — A missed 19-yard field goal as No. 9 Notre Dame over- fell out of bounds and safety ArIzona State 38, No. 16USC by Washington State with came two turnovers and two Jordan Richards dove to try to 34: LOS ANGELES — Jael- seconds remaining allowed bungled snaps on field goal break it up on Notre Dame&#39;s en Strong caught a 46-yard California to hang on for the attempts on a cold, rainy Sat- last chance on fourth-and-ll. touchdown pass from Mike high-scoring victory. Koyack in the corner of the