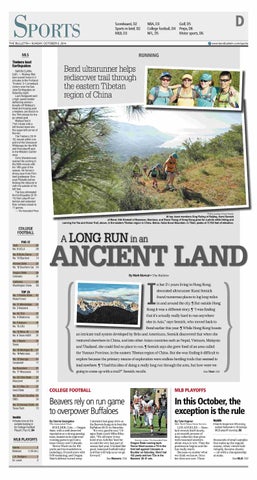 Calif.— Rodney Wallace scored twice in 3 minutes in the Portland Timbers&#39; 2-1 comeback victory over the San Jose Earthquakes on Saturday night. Liam Ridgewell sent a high-speed header deflecting unintentionally off Wallace&#39;s head and looping past a helpless Jon Busch in the 74th minute for the go-ahead goal. Wallace tied it 71st minute with a left-footed blast into the upper-left corner of the net. The Timbers (10-912) moved within one point of the Vancouver Whitecaps for the fifth and final playoff spot in the Western Conference. Chris Wondolowski opened the scoring in the 56th minute with his 14th goal of the season. He forced a diving save from Portland goalkeeper Donovan Ricketts before flicking the rebound in with the outside of his

The loss eliminated the Earthquakes (6-1311) from playoff contention and extended their winless streak to 11 games. — The Associated Press

At top, team members Xing Ruling of Beijing, Kami Semick of Bend, Niki Kimball of Bozeman, Montana, and Stone Tsang of Hong Kong pose for a photo while hiking and running the Tea and Horse Trail, above, in the eastern Tibetan region in China. Below, Haba Snow Mountain, in Tibet, peaks at17,703 feet of elevation.

A LONG RUN in an

By Mark Morical • The Bulletin

in and around the city. $ But outside Hong

Kong it was a different story. $ &quot;I was finding that it&#39;s actually really hard to run anywhere

else in Asia,&quot; says Semick, who moved back to

an intricate trail system developed by Brits and Americans, Semick discovered that when she

ventured elsewhere in China, and into other Asian countries such as Nepal, Vietnam, Malaysia Texas

and Thailand, she could find no place to run. $ Semick says she grew fond of an area called

the Yunnan Province, in the eastern Tibetan region of China. But she was finding it difficult to

lead nowhere. $ &quot;I had this idea of doing a really long run through the area, but how were we

going to come up with a trail?&quot; Semick recalls.

In this October, the exception is the rule

Inside • Ducks now on the outside looking in for College Football Playoff, Pac-12,D4

By Dennis Georgatos The AssociatedPress

reputation as a strongpassing team, leaned on its improved running game to pull out a tense victory over Colorado. Terron Ward ran for 102 yards and two touchdowns,

induding a 10-yard score with 5:09 remaining, and Oregon State&#39;s defense turned away

Colorado&#39;s last-gasp drive as the Beavers hung on to beat the

ball reveals itself slowly, a six-month process of data collection that gives

said. &quot;We all know it was

kind of an Achilles&#39; heel for us until the very last part of season last year. It looked like

good, balanced football today and that will help us as we go forward.&quot;

Oregon State running back Terron Ward scores a TD in the first half against Colorado in Boulder on Saturday. Ward had 102 yards and two TDs in the Beavers&#39; 36-31 win.

about ways to win. Then the that make up the regular postseason begins and the season, when viewed indifun really starts. vidually, become chaotic Because no matter what — all with a championship we think we know, October does not care. Those