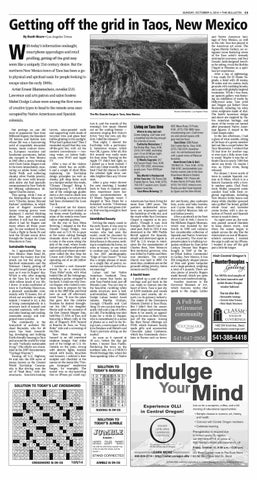 tage of New Mexico, as well as the role Taos has played in

the American art scene. The

profiling, getting off the grid may seem like a uniquely 21st century desire. But the

es for sitting, rivals the Rothko

Chapel in Houston as a spiri-

northern New Mexico town of Taos has been a go-

After a day of sightseeing,

to physical and spiritual oasis for people looking to

I was ready for El Monte Sagrado, a hotel with 48 rooms,

30 suites and six casitas, leafy grounds with rambling brooks, and a spawith globallyinspired

treatments. While I was there,

occupied by Native Americans and Spanish

colonials. ture it, and the sounds of the

evening&#39;s live music filtered But perhaps no one did more to popularize Taos than Millicent Rogers, the Standard

turrets, solar-paneled roofs out on the cooling breeze-

and supporting walls made of someone singing Bob Dylan&#39;s recycledtires and glass beer lyrics: &quot;Any day now, any day bottles glinting in the sunlight. now, I shall be released.&quot;

Oil heiress and fashion icon whose life was a fast-moving What had I gotten into? Then I swirl of exquisitely decorated reminded myself that this was homes, haute couture dress- off-the-grid lite, with all the es, European vacations and modern conveniences — runhandsome paramours, before ning water, an indoor bathshe escaped to New Mexico room, evenWi-Fi and Apple in 1947 after a messy breakup

stick skirts she had specially commissioned in New York by her lifelong collaborator, designer Charles James. This spring, while I was at

Earthship with a particularly boisterous mouse, which

was OK, I guess. After all, this dirt mound was really more his than mine. Turning on the

After a tour of the visitors

Apple TV didn&#39;t feel right, so I picked up a book instead. I

center, which has an exhib-

it and a couple of short films least I had the chance to catch explaining th e E a r thship the celestial light show outdesign principles (as well as side, brighter than any I&#39;d ever cheeky gift shop items such seen. as a bumper sticker that reads, After a gray water shower &quot; Climate Change? Bring It .

the next morning, I headed

Earthship.com.&quot;), I followed back to Taos to explore and, one of the college-age guides later, experience more luxdown a dirt road to check into

Americans has been living for

munity with 75 homes, five of here on and off afterward, and-breakfast, where Mabel which are available as nightly loved Taos. &quot;It was the place Dodge Luhan hosted Ansel

tourism (and nearby ski resorts ) as its primary industry.

of living contemplatively in a

structure built of natural and recycled materials, with ther-

Marin said on the occasion of

mal solar heating and cooling, the first Dennis Hopper Day, renewable energy and inte- held May 17, 2014, in Taos, and grated water systems. featuring a bikers rally at the T he community i s t h e siteof Hopper&#39;s 2010 funeral b rainchild of a r chitect M i - at Rancho de Taos, an &quot;Easy chael Reynolds, who for 40 Rider&quot; ride and a screening of years has been research- the film. ing, developing and building T aos Mesa Brewing i s Earth-friendly housing in Taos housed in an old converted and around the world for what airplane hangar, four miles he calls &quot;radically sustainable east of the bridge on U.S. 64. living.&quot; (His efforts are chron- Outside on the patio, strung icled in the 2007 documentary with electric lights, tourists &quot;Garbage Warrior.&quot;) mixed with locals, bicyclists &#39;Ibrning off U.S. Highway and boozers. I ordered a beer 64 and into the 650 acres of sampler and chuckled at the mesas known as the Greater names on the menu (the &quot;FunWorld Earthship Commu- gus Amungus&quot; mushroom nity is like driving onto the burger, for example). The set of &quot;Mad Max,&quot; with dirt sunset was so sky-sprawling structures, futuristic-looking that no iPhone pic could cap-

ican figures. (I stayed in the Chief Joseph suite.) In the late afternoon, I had

a glass of wine outside, sitting at the base of a green meadow laid out like a carpet below the Taos Mountains. I wished that I&#39;d had time for another nap, or even just a little more time

to waste. Maybe it was the altitude (Taos is nearly 7,000 feet above sea level). Or maybe I was, as Dylan wrote, being released. For dinner, I drove north of

town to sample Spanish cuisine at El Meze, which is in a

and Coyote Moon, which of- whole t rout

fers colorful Mexican folk art and Indian jewelry. After a sandwich at the Bent

creme brulee, with a nice selection of French and Spanish wines to wash it down.

As night came on, the wait-

which was founded by her family in 1956 and contains when the sunset began to her considerable collection of splash across the sky like the Spanish and Native American watercolors on one of Blumenart and jewelry. The most im- schein&#39;s canvases, I resisted pressive piece is a hulking tur- the urge to pull out my iPhone. quoise necklace by Zuni artist I wanted to stay off the grid Leekya Deyuse that Rogers just a little bit longer. b ought in 1 947 at t h e I n -

ter-Tribal Indian Ceremonial in Gallup, New Mexico. It has 294 irregularly shaped pieces of blue and green turquoise and a huge pendant, weighing

a total of 4 pounds. There are

alsopieces ofjew elry Rogers made herself, which are quite abstract and modern-looking. A nother must-see is t h e H arwood Museum o f A r t , which features works t h at

speak to the Anglo, Latino

M a r th a G r a h am, The center of the Downtown Historic District is Taos Plaza. But I didn&#39;t find the assortment of shops and restaurants

Georgia O&#39;Keeffe and Carl Jung. Or you can just stop for a quick visit and a cup of coffee, as I did. The building was also home for a while to Hopper, who is remembered in a series of photos on a wall in the living room, a warm space with a kiva fireplace and Mabel&#39;s and Tony&#39;s portraits sitting on the

style,&quot; with red and green chil- pueblo&#39;s multistoried struces, that was big enough to feed tures are impressive against a family. the backdrop of wide sky, and the stark white San Geronimo Uninhibited beauty Chapel is majestic in its simDriving the empty roads in plicity. Though it may look the early hours, it was easy to tranquil, the church has a visee how Rogers and Luhan, olent past. Built in 1619, it was women who had seen the destroyed in the 1680 Pueblo world, could be charmed by Revolt against the Spanish, this corner of it. &quot;There was no rebuilt and destroyed again in disturbance in the scene, noth- 1847 by U.S. troops in retaliing to complicate the forms, no ation for the assassination of trees or houses, or any detail Charles Bent, New Mexico&#39;s to confuse one,&quot; Luhan wrote first territorial governor, who in her 1937 autobiography, was killed by Pueblo and Mexit wasn&#39;t the beauty that first Cream and Coffee Shop was &quot;Edge of Taos Desert.&quot; &quot;It was ican attackers. The current struck me but the string of operating out of an old yellow like a simple phrase of music church was built in 1850. On fast-foodrestaurants and the school bus. or a single line of poetry, es- most days, residents are on the Walmart. Clearly, getting off I watched a cool character sential and reduced to the bar- grounds selling jewelry, totem the grid wasn&#39;t going to be as streak by on a motorcycle, est meaning.&quot; animals and fry bread. easy as it was in Rogers&#39; day. &quot;Easy Rider&quot;-style, with what L uhan a n d h e r Na t i v e ttown Which is why after stopping looked like all his belongings, American husband, Tony, A touris at the Taos Inn for the best including a guitar, strapped to built a home that backs up I picked up a pair of silver chile relleno lunch of my life, his back. I could see why Den- onto Taos Pueblo land, just off earrings and got back in the I drove 14 miles northwest of nis Hopper, who visited a com- Morada Lane. You can stay in car, ready to venture into the town to Earthship Biotecture, mune here to prepare for his the beautiful, rambling white heart of town. Taos is just shy

rentals. I wanted to try a day

an upstairs gallery was featuring an exhibition of works by Hollywood actor, Taos artist and Hopper pal Robert Dean Stockwell, including his witty crosssculptures made of dice. The hotel&#39;s luxurious design and decor are inspired by Native American heritage, and many of the rooms are named

nine of Rogers&#39; incredible I ventured out for dinner, James evening gowns were though Icould have cooked at displayed, I started thinking my home sweet Earthship, as about Taos and wondering some of the rentals even have whether it still had the same indoor vegetable gardens. allure it had for Rogers and On the way to Taos Mesa many others all those years Brewing, I stopped at the Rio ago. So one weekend in June, Grande Gorge Bridge, two I took a flight to Santa Fe and miles east on U.S. 64, to gaze took the 52-mile scenic drive at the water cutting through through the Sangre de Cristo dramatic slices of earth, and Mountains to Taos. to take in the scene along the side of the road, where locals Sustainable housing had set up tables to sell jewelry As I approached Taos on and crafts and where an enterNew Mexico State Road 68, prise called the Bus Stop Ice

El Monte Sagrado resort. I stopped at Taos Diner for a

my Earthship, a structure that Art&#39;s &quot;Charles James: Beyond had been christened the Lone

the Metropolitan Museum of

there to be nearly as appealing as the ones on Bent Street, just off the square. Among the Bent Street offerings are FX18, which features locally m ade gifts and accessories; Chocolate (plus) Cashmere, which has homemade choco-

lates in flavors such as laven-

Bordering the town on the northern side, it&#39;s a UNESCO World Heritage Site, where the

SUDOKU IS ON C6

ZI)fSBCX Answer: H ARDER P O LICE S W A M P Y DEVOUR ACCEPT IN V E RT He told his wife there wouldn&#39;t be a line to see the movie, but he would-

STAND CORRECTED jUMBLE IS ON C6

OUI&#39; Join us for a reception, coffee, and a full morning of educational opportunities:

• Celebrate learning. Preregistration is required due to limited space. To register, call 800-824-2714; or online at http:I/osher.uoregon.edu/experience olli -