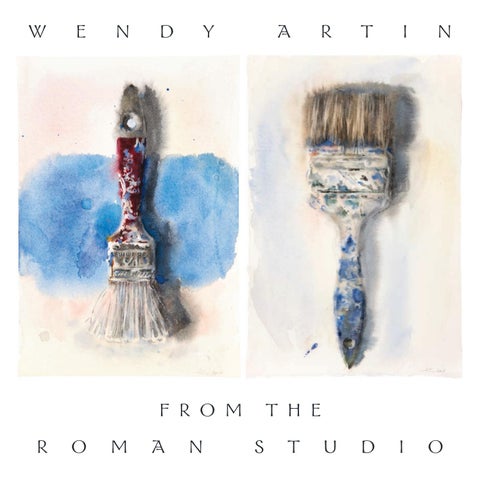 These paintings are dedicated to my wonderful husband Bruno.

BEING IN TIME For the past several years, Wendy Artin and I have intermittently returned to a conversation we began while I was living in Rome. When I was first there, I felt paralyzed as a writer by what felt to me an injunction to repeat the great themes that have for so many centuries characterized an artist’s view of that monumental city. Artin’s work fascinated me because for her, the city’s familiar ruins and statues were anything but calcified; her paintings elucidate the way that time has shaped the objects she depicts, of course, but also, in her watery medium, stone re-enters the play of time. We began talking about nostalgia, that desire to return to the beloved, and about what each iteration of such a reencounter might bring anew. It was through our ongoing conversation that I began to think about the value of art as a trace, as the imprint of a hand or mind moving with or through its medium, constrained, as we all always are, by time. Whether painting classical subjects, her models, or fruits brought in from the market, Artin is absolutely committed to the present moment, which is both an ethics and, I think, an erotics. The immediacy of her art does not preclude loss — instead, since her painting is always of that which has been, one might say that it is imbued with it — but it does offer the fact of our being-in-time as an absolute, though fleeting, consolation. Indeed, one of the great tensions in Artin’s work is the play of time: watercolor is the most temporally-bound form of painting, yet of course the work of art also endures past the moment of its composition, to be experienced time and again. The first thing to say about Artin’s paintings is how incredibly beautiful they are, how gestural and sensuous, how alive. And yet theirs is a paradoxical presence, since so many of her figures are penetrated by absence — this is one way of understanding the effect of the highlights, rendered by leaving the paper untouched, which frequently merge with the unpainted background. The bareness of both highlight and background is identical, and yet the first signifies presence, the second absence. The viewer is drawn into the process of making as she or he chooses where to read form, where negative space; our desire completes the dance begun by the brush and its liquid medium. And we are mesmerized, too, into the deep abstraction of Artin’s marks, which fall repeatedly out of their representational function. The effect is one of a pervasive light and energy that maps neither onto the subject portrayed nor onto the artist behind the brush, but onto the medium itself. There are starbursts where the paint has backrun, and halos around the bodies where it has bled, which are incredibly moving to me, and remind me of what Virginia Woolf writes in To the Lighthouse: “Our apparitions, the things you know us by, are simply childish. Beneath it is all dark, it is all spreading, it is unfathomably deep; but now and again we rise to the surface and that is what you see us by.” Artin’s work shows both the ghostly “apparitions” we recognize as form and the “dark, … spreading, … unfathomably deep” substance from which they emerge, and to which they return.

There are three main series — of paintbrushes, nudes, and sculptures — in this show of Artin’s new work at Gurari Collections. In the nudes and in the paintings of classical sculptures, Artin shows opposing sides of the same coin; but as she turns it around and around, the two sides begin to merge. Artin transforms in the alchemy of her eye one form of being into another, enacting a metamorphosis no less startling than those Ovid describes. Her work brings both the living model and the sculptures from antiquity into a paradoxical and fascinating space: in the living medium of watercolor, they are no longer flesh or stone, living or dead — those easy antinomies — but rather enter the mysterious space of representation, in which the particular is abstracted and the abstract is made once again particular. The uncanniness of Artin’s work stems in part from the vivacity of these forms — the sculptural fragments are eerily enlivened, just as the living models are transformed from flesh into painterly marks, which eventually begin to “come to life” — this is Artin’s way of describing the moment when the illusion of three-dimensionality begins. “I would almost leave the drawing at that first moment,” Artin writes. Indeed, the brilliance of many of these paintings is their ability to keep figuration at bay, to preserve the traces of mark-making that insure that these paintings’ subject is the ceaseless and endlessly fascinating drama of becoming. What we read in these paintings is, then, something like the history of their own making. Perhaps an equally interesting comparison might be made between the new series of paintbrushes and Artin’s vast oeuvre depicting the ruins and fragments of antiquity, as well as the urban walls of New York, Paris, and Rome she used to paint. For they are, after all, all visions of the palimpsest. The older paintings archive the long history of the city, accessing the shared language of public life, while the paintbrushes chronicle a private world. Though seemingly inanimate and impersonal, the painted brushes archive the drive toward creation and beauty that gave shape to her family’s life together in Rome. These brushes, squat and stained with wall paint, stand in contrast to the watercolor brushes that rendered them; and like the fragmentary texts read in a palimpsest, they point only in incomplete ways to the stories of which they are a part. And yet they survive, as talismanic objects that carry their maker backwards into memory, and forward, once again, into art. Jessica Fisher Rome Prize Fellow in Literature 2012 Williams College Department of English October 2015

Universal and Intimate Years ago, traveling near and far, it was always a relief to lighten up, to carry the key that locked the door to the room that held my worldly possessions, as I left to paint for the day, with my small watercolor box and brushes, my paper, my hat. Each of the paintings in this show is like a key that opens the door to vast chambers of memories, of moments, real and imagined. They are like a whispered cue on stage, like the name of a favorite family story, like a book whose adventure is everyoneâ&#x20AC;&#x2122;s to invent. Can the drops of paint on my paintbrushes tell you about my treasured moments? Despite my doubts, maybe they can â&#x20AC;&#x201C; maybe they can tell of the starry intense blue skies around my childrenâ&#x20AC;&#x2122;s beds, of the gigantic green cardboard Christmas tree that is rolled up every year with its paper chains of mermaids and pirate ships. Maybe a flight of fancy will dream up other adventures for them, cast colorfully as watercolor brushes, or painting gigantic oceans full of fish. Or maybe my nostalgic relics will simply display themselves in their glorious present, heroes of age, the keys that unlock your own dear memories. My statues are your statues, his statues, her statues. Quietly, they encourage us to look closer and longer, until we have lost ourselves in the tiny chips and stains, in their solid strength. Sometimes my models surprise me by telling me what they were thinking about during the hours of our life drawing sessions, or the farmer at the market stares as I tenderly select the beets he has hastily bundled together. Then the vastly different realities come together and there is a glorious birth, or a simple picture.

Afterword by the artist: Universal and Intimate Photo of Wendy Artin in the Roman Studio, 2015 Back: Laura Magnani and Laura leaning 2015, see 13 & 14

Wendy Artin with a painting of the Trevi Fountain in her Roman Studio, 2015 Thank you to all of my dear friends, and to the many wonderful people whose appreciation and enthusiasm for my paintings has supported me and my family, in our Roman Studio, beneath the oasis-like American Academy and the dazzling Villa Doria Pamphilj. A particular thank you to Russ Gerard and to Jessica Fisher. And most of all, thank you to my very precious and very amazing family. 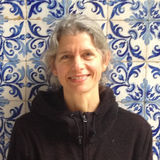 Exhibition catalogue published by Gurari Collections in Boston, for the November 2015 show "From the Roman Studio, watercolor paintings by W...

Exhibition catalogue published by Gurari Collections in Boston, for the November 2015 show "From the Roman Studio, watercolor paintings by W...