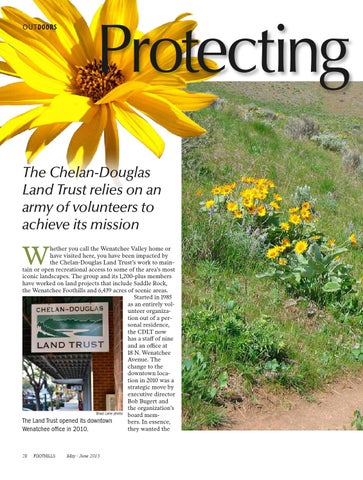 hether you call the Wenatchee Valley home or have visited here, you have been impacted by the Chelan-Douglas Land Trust’s work to maintain or open recreational access to some of the area’s most iconic landscapes. The group and its 1,200-plus members have worked on land projects that include Saddle Rock, the Wenatchee Foothills and 6,439 acres of scenic areas. Started in 1985 as an entirely volunteer organization out of a personal residence, the CDLT now has a staff of nine and an office at 18 N. Wenatchee Avenue. The change to the downtown location in 2010 was a strategic move by executive director Bob Bugert and the organization’s Brad Lane photo board memThe Land Trust opened its downtown bers. In essence, they wanted the Wenatchee office in 2010.