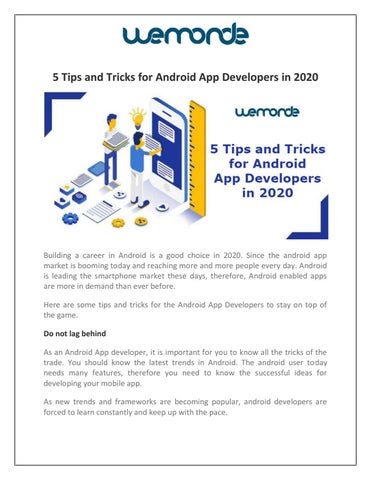 5 Tips and Tricks for Android App Developers in 2020

Building a career in Android is a good choice in 2020. Since the android app market is booming today and reaching more and more people every day. Android is leading the smartphone market these days, therefore, Android enabled apps are more in demand than ever before. Here are some tips and tricks for the Android App Developers to stay on top of the game. Do not lag behind As an Android App developer, it is important for you to know all the tricks of the trade. You should know the latest trends in Android. The android user today needs many features, therefore you need to know the successful ideas for developing your mobile app. As new trends and frameworks are becoming popular, android developers are forced to learn constantly and keep up with the pace.

Get comfortable with native code It is better to build native apps that are native to the device that they are being built on. Though building a hybrid app that runs on both devices saves time, but it is still recommended to build native apps rather than hybrid apps because the speed performance of the native app is better than the hybrid app. Since the dawn of new frameworks, even developing an android app natively is becoming time-efficient. The framework that is being used by many Android developers worldwide is React Native. Javascript Popularity of JavaScript has increased significantly in the recent years due to Dawn of time saving JavaScript frameworks such as Angular, React, and React Native. The trend of the use of JS will keep on increasing in the coming years. Cross-platform compatibility React Native and Xamarin are gaining popularity because android apps developed on these platforms are compatible with iOS and Android alike. Hence, it makes the job of a mobile app developer less tedious. Most clients prefer cross-platform apps as they are cost-efficient both in development as well as maintenance. It all comes down to the design As soon as the app comes across the end user on play store, it should look visually enticing. The app design should also match with performance and memory management of the app. Developers must integrate design with great visuality and great performance. The app designer should ensure that the app has a strong navigation design. Creating an effective UX design is very important. A good developer needs to keep data, design, analytics, marketing, etc, aspect of the app in the mind too while developing the app. If the design of the app is not

attractive then it will not matter if it has high functionalities since it will not be able to attract users. 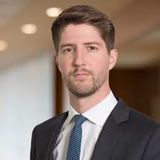