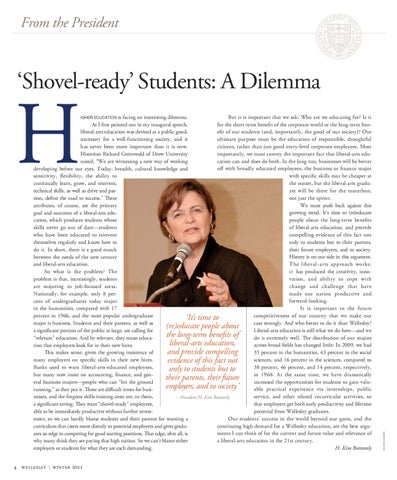 But it is important that we ask: Who are we educating for? Is it is facing an interesting dilemma. for the short-term benefit of the corporate world or the long-term benAs I first pointed out in my inaugural speech, efit of our students (and, importantly, the good of our society)? Our liberal-arts education was devised as a public good, ultimate purpose must be the education of responsible, thoughtful necessary for a well-functioning society, and it citizens, rather than just good entry-level corporate employees. Most has never been more important than it is now. importantly, we must convey the important fact that liberal-arts eduHistorian Richard Greenwald of Drew University cation can and does do both. In the long run, businesses will be better noted, “We are witnessing a new way of working off with broadly educated employees; the business or finance major developing before our eyes. Today, breadth, cultural knowledge and with specific skills may be cheaper at sensitivity, flexibility, the ability to the outset, but the liberal-arts graducontinually learn, grow, and reinvent, ate will be there for the marathon, technical skills, as well as drive and pasnot just the sprint. sion, define the road to success.” These We must push back against this attributes, of course, are the primary growing trend. It’s time to (re)educate goal and outcome of a liberal-arts edupeople about the long-term benefits cation, which produces students whose of liberal-arts education, and provide skills never go out of date—students compelling evidence of this fact not who have been educated to reinvent only to students but to their parents, themselves regularly and know how to their future employers, and to society. do it. In short, there is a good match History is on our side in this argument. between the needs of the new century The liberal-arts approach works; and liberal-arts education. it has produced the creativity, innoSo what is the problem? The vation, and ability to cope with problem is that, increasingly, students change and challenge that have are majoring in job-focused areas. made our nation productive and Nationally, for example, only 8 perforward-looking. cent of undergraduates today major It is important to the future in the humanities, compared with 17 competitiveness of our country that we make our percent in 1966, and the most popular undergraduate ‘It’s time to case strongly. And who better to do it than Wellesley? major is business. Students and their parents, as well as (re)educate people about Liberal-arts education is still what we do here—and we a significant portion of the public at large, are calling for the long-term benefits of do it extremely well. The distribution of our majors “relevant” education. And by relevant, they mean educaliberal-arts education, across broad fields has changed little: In 2009, we had tion that employers look for in their new hires. and provide compelling 35 percent in the humanities, 43 percent in the social This makes sense, given the growing insistence of sciences, and 16 percent in the sciences, compared to many employers on specific skills in their new hires. evidence of this fact not 38 percent, 46 percent, and 14 percent, respectively, Banks used to want liberal-arts-educated employees, only to students but to in 1968. At the same time, we have dramatically but many now insist on accounting, finance, and gentheir parents, their future increased the opportunities for students to gain valueral business majors—people who can “hit the ground employers, and to society.’ able practical experience via internships, public running,” as they put it. These are difficult times for busiservice, and other related cocurricular activities, so nesses, and the forgone skills-training costs are, to them, —President H. Kim Bottomly that employers get both early productivity and lifetime a significant saving. They want “shovel-ready” employees, potential from Wellesley graduates. able to be immediately productive without further investOur students’ success in the world beyond our gates, and the ment, so we can hardly blame students and their parents for wanting a continuing high demand for a Wellesley education, are the best argucurriculum that caters more directly to potential employers and gives graduments I can think of for the current and future value and relevance of ates an edge in competing for good starting positions. That edge, after all, is a liberal-arts education in the 21st century. why many think they are paying that high tuition. So we can’t blame either employers or students for what they are each demanding. H. Kim Bottomly 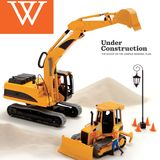