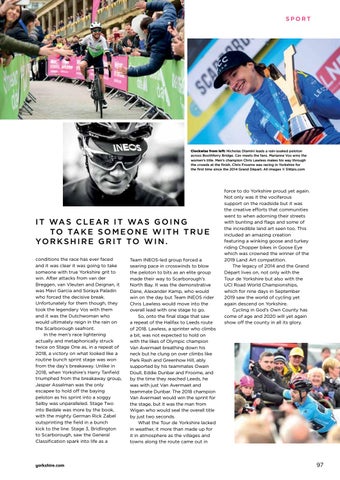 Clockwise from left: Nicholas Dlamini leads a rain-soaked peloton across Boothferry Bridge. Cav meets the fans. Marianne Vos wins the women’s title. Men’s champion Chris Lawless makes his way through the crowds at the finish. Chris Froome was racing in Yorkshire for the first time since the 2014 Grand Départ. All images © SWpix.com

I T WA S C L E A R I T WA S G O I N G T O TA K E S O M E O N E W I T H T R U E YO R K S H I R E G R I T T O W I N . conditions the race has ever faced and it was clear it was going to take someone with true Yorkshire grit to win. After attacks from van der Breggen, van Vleuten and Deignan, it was Mavi Garcia and Soraya Paladin who forced the decisive break. Unfortunately for them though, they took the legendary Vos with them and it was the Dutchwoman who would ultimately reign in the rain on the Scarborough seafront. In the men’s race lightening actually and metaphorically struck twice on Stage One as, in a repeat of 2018, a victory on what looked like a routine bunch sprint stage was won from the day’s breakaway. Unlike in 2018, when Yorkshire’s Harry Tanfield triumphed from the breakaway group, Jesper Asselman was the only escapee to hold off the baying peloton as his sprint into a soggy Selby was unparalleled. Stage Two into Bedale was more by the book, with the mighty German Rick Zabel outsprinting the field in a bunch kick to the line. Stage 3, Bridlington to Scarborough, saw the General Classification spark into life as a

Team INEOS-led group forced a searing pace in crosswinds to blow the peloton to bits as an elite group made their way to Scarborough’s North Bay. It was the demonstrative Dane, Alexander Kamp, who would win on the day but Team INEOS rider Chris Lawless would move into the overall lead with one stage to go. So, onto the final stage that saw a repeat of the Halifax to Leeds route of 2018. Lawless, a sprinter who climbs a bit, was not expected to hold on with the likes of Olympic champion Van Avermaet breathing down his neck but he clung on over climbs like Park Rash and Greenhow Hill, ably supported by his teammates Owain Doull, Eddie Dunbar and Froome, and by the time they reached Leeds, he was with just Van Avermaet and teammate Dunbar. The 2018 champion Van Avermaet would win the sprint for the stage, but it was the man from Wigan who would seal the overall title by just two seconds. What the Tour de Yorkshire lacked in weather, it more than made up for it in atmosphere as the villages and towns along the route came out in

force to do Yorkshire proud yet again. Not only was it the vociferous support on the roadside but it was the creative efforts that communities went to when adorning their streets with bunting and flags and some of the incredible land art seen too. This included an amazing creation featuring a winking goose and turkey riding Chopper bikes in Goose Eye which was crowned the winner of the 2019 Land Art competition. The legacy of 2014 and the Grand Départ lives on, not only with the Tour de Yorkshire but also with the UCI Road World Championships, which for nine days in September 2019 saw the world of cycling yet again descend on Yorkshire. Cycling in God’s Own County has come of age and 2020 will yet again show off the county in all its glory.