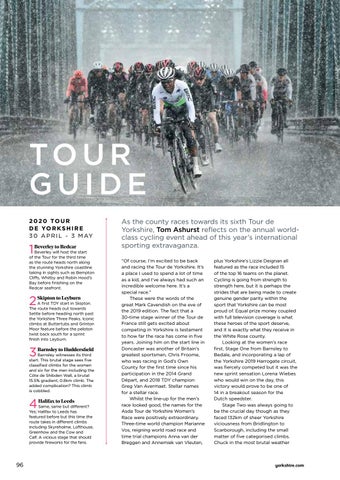 Beverley will host the start of the Tour for the third time as the route heads north along the stunning Yorkshire coastline taking in sights such as Bempton Cliffs, Whitby and Robin Hood’s Bay before finishing on the Redcar seafront.

A first TDY start in Skipton. The route heads out towards Settle before heading north past the Yorkshire Three Peaks. Iconic climbs at Buttertubs and Grinton Moor feature before the peloton twist back south for a sprint finish into Leyburn.

Barnsley witnesses its third start. This brutal stage sees five classified climbs for the women and six for the men including the Côte de Shibden Wall, a brutal 15.5% gradient, 0.8km climb. The added complication? This climb is cobbled.

Same, same but different? Yes; Halifax to Leeds has featured before but this time the route takes in different climbs including Skyreholme, Lofthouse, Greenhow and the Cow and Calf. A vicious stage that should provide fireworks for the fans.

As the county races towards its sixth Tour de Yorkshire, Tom Ashurst reflects on the annual worldclass cycling event ahead of this year’s international sporting extravaganza. “Of course, I’m excited to be back and racing the Tour de Yorkshire. It’s a place I used to spend a lot of time as a kid, and I’ve always had such an incredible welcome here. It’s a special race.” These were the words of the great Mark Cavendish on the eve of the 2019 edition. The fact that a 30-time stage winner of the Tour de France still gets excited about competing in Yorkshire is testament to how far the race has come in five years. Joining him on the start line in Doncaster was another of Britain’s greatest sportsmen, Chris Froome, who was racing in God’s Own County for the first time since his participation in the 2014 Grand Départ, and 2018 TDY champion Greg Van Avermaet. Stellar names for a stellar race. Whilst the line-up for the men’s race looked good, the names for the Asda Tour de Yorkshire Women’s Race were positively extraordinary. Three-time world champion Marianne Vos, reigning world road race and time trial champions Anna van der Breggen and Annemiek van Vleuten,

plus Yorkshire’s Lizzie Deignan all featured as the race included 15 of the top 16 teams on the planet. Cycling is going from strength to strength here, but it is perhaps the strides that are being made to create genuine gender parity within the sport that Yorkshire can be most proud of. Equal prize money coupled with full television coverage is what these heroes of the sport deserve, and it is exactly what they receive in the White Rose county. Looking at the women’s race first, Stage One from Barnsley to Bedale, and incorporating a lap of the Yorkshire 2019 Harrogate circuit, was fiercely competed but it was the new sprint sensation Lorena Wiebes who would win on the day, this victory would prove to be one of 14 in a breakout season for the Dutch speedster. Stage Two was always going to be the crucial day though as they faced 132km of sheer Yorkshire viciousness from Bridlington to Scarborough, including the small matter of five categorised climbs. Chuck in the most brutal weather