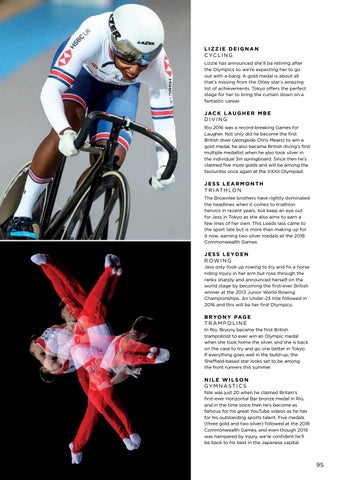 LIZZIE DEIGNAN C YC L I N G Lizzie has announced she’ll be retiring after the Olympics so we’re expecting her to go out with a bang. A gold medal is about all that’s missing from the Otley star’s amazing list of achievements. Tokyo offers the perfect stage for her to bring the curtain down on a fantastic career.

JAC K L AU G H E R M B E DIVING Rio 2016 was a record-breaking Games for Laugher. Not only did he become the first British diver (alongside Chris Mears) to win a gold medal, he also became British diving’s first multiple medallist when he also took silver in the individual 3m springboard. Since then he’s claimed five more golds and will be among the favourites once again at the XXXII Olympiad.

JESS LEARMONTH T R I AT H L O N The Brownlee brothers have rightly dominated the headlines when it comes to triathlon heroics in recent years, but keep an eye out for Jess in Tokyo as she also aims to earn a few lines of her own. This Leeds lass came to the sport late but is more than making up for it now, earning two silver medals at the 2018 Commonwealth Games.

JESS LEYDEN R OW I N G Jess only took up rowing to try and fix a horse riding injury in her arm but rose through the ranks sharply and announced herself on the world stage by becoming the first-ever British winner at the 2013 Junior World Rowing Championships. An Under-23 title followed in 2016 and this will be her first Olympics.

B R YO N Y PA G E TRAMPOLINE In Rio, Bryony became the first British trampolinist to ever win an Olympic medal when she took home the silver, and she is back on the case to try and go one better in Tokyo. If everything goes well in the build-up, the Sheffield-based star looks set to be among the front runners this summer.

NILE WILSON GYMNASTICS Nile was just 20 when he claimed Britain’s first-ever Horizontal Bar bronze medal in Rio, and in the time since then he’s become as famous for his great YouTube videos as he has for his outstanding sports talent. Five medals (three gold and two silver) followed at the 2018 Commonwealth Games, and even though 2019 was hampered by injury, we’re confident he’ll be back to his best in the Japanese capital.