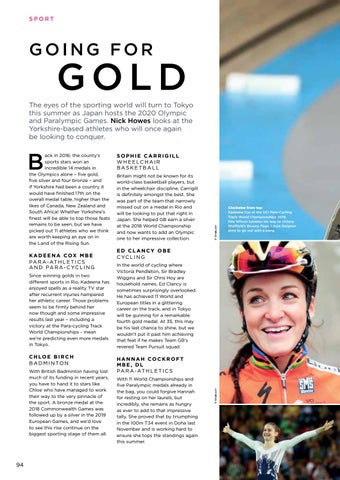 The eyes of the sporting world will turn to Tokyo this summer as Japan hosts the 2020 Olympic and Paralympic Games. Nick Howes looks at the Yorkshire-based athletes who will once again be looking to conquer.

K A D E E N A C OX M B E PA R A - AT H L E T I C S A N D PA R A - C YC L I N G Since winning golds in two different sports in Rio, Kadeena has enjoyed spells as a reality TV star after recurrent injuries hampered her athletic career. Those problems seem to be firmly behind her now though and some impressive results last year – including a victory at the Para-cycling Track World Championships - mean we’re predicting even more medals in Tokyo.

C H LO E B I R C H B A D M I N TO N With British Badminton having lost much of its funding in recent years, you have to hand it to stars like Chloe who have managed to work their way to the very pinnacle of the sport. A bronze medal at the 2018 Commonwealth Games was followed up by a silver in the 2019 European Games, and we’d love to see this rise continue on the biggest sporting stage of them all.

Britain might not be known for its world-class basketball players, but in the wheelchair discipline, Carrigill is definitely amongst the best. She was part of the team that narrowly missed out on a medal in Rio and will be looking to put that right in Japan. She helped GB earn a silver at the 2018 World Championship and now wants to add an Olympic one to her impressive collection.

ED CLANCY OBE C YC L I N G In the world of cycling where Victoria Pendleton, Sir Bradley Wiggins and Sir Chris Hoy are household names, Ed Clancy is sometimes surprisingly overlooked. He has achieved 11 World and European titles in a glittering career on the track, and in Tokyo will be gunning for a remarkable fourth gold medal. At 35, this may be his last chance to shine, but we wouldn’t put it past him achieving that feat if he makes Team GB’s revered Team Pursuit squad.

HANNAH COCKROFT MBE, DL PA R A - AT H L E T I C S With 11 World Championships and five Paralympic medals already in the bag, you could forgive Hannah for resting on her laurels, but incredibly, she remains as hungry as ever to add to that impressive tally. She proved that by triumphing in the 100m T34 event in Doha last November and is working hard to ensure she tops the standings again this summer.

ack in 2016, the county’s sports stars won an incredible 14 medals in the Olympics alone – five gold, five silver and four bronze – and if Yorkshire had been a country it would have finished 17th on the overall medal table, higher than the likes of Canada, New Zealand and South Africa! Whether Yorkshire’s finest will be able to top those feats remains to be seen, but we have picked out 11 athletes who we think are worth keeping an eye on in the Land of the Rising Sun.