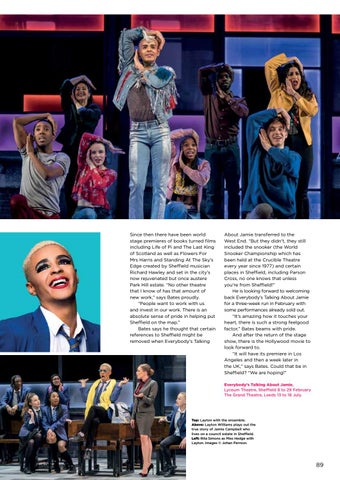 Since then there have been world stage premieres of books turned films including Life of Pi and The Last King of Scotland as well as Flowers For Mrs Harris and Standing At The Sky’s Edge created by Sheffield musician Richard Hawley and set in the city’s now rejuvenated but once austere Park Hill estate. “No other theatre that I know of has that amount of new work,” says Bates proudly. “People want to work with us and invest in our work. There is an absolute sense of pride in helping put Sheffield on the map.” Bates says he thought that certain references to Sheffield might be removed when Everybody’s Talking

About Jamie transferred to the West End. “But they didn’t, they still included the snooker (the World Snooker Championship which has been held at the Crucible Theatre every year since 1977) and certain places in Sheffield, including Parson Cross, no one knows that unless you’re from Sheffield!” He is looking forward to welcoming back Everybody’s Talking About Jamie for a three-week run in February with some performances already sold out. “It’s amazing how it touches your heart, there is such a strong feelgood factor,” Bates beams with pride. And after the return of the stage show, there is the Hollywood movie to look forward to. “It will have its premiere in Los Angeles and then a week later in the UK,” says Bates. Could that be in Sheffield? “We are hoping!” Everybody’s Talking About Jamie, Lyceum Theatre, Sheffield 8 to 29 February The Grand Theatre, Leeds 13 to 18 July.

Top: Layton with the ensemble. Above: Layton Williams plays out the true story of Jamie Campbell who lives on a council estate in Sheffield. Left: Rita Simons as Miss Hedge with Layton. Images © Johan Perrson.