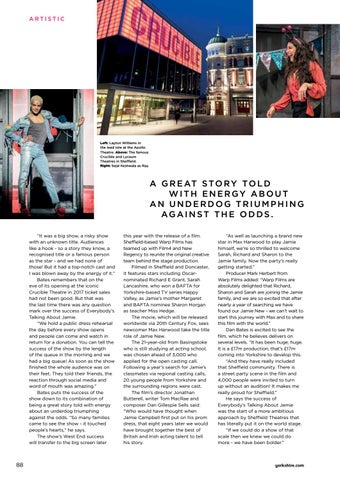 Left: Layton Williams in the lead role at the Apollo Theatre. Above: The famous Crucible and Lyceum Theatres in Sheffield. Right: Sejal Keshwala as Ray.

A G R E AT S T O R Y T O L D WITH ENERGY ABOUT AN UNDERDOG TRIUMPHING AG A I N ST T H E O D D S . “It was a big show, a risky show with an unknown title. Audiences like a hook - so a story they know, a recognised title or a famous person as the star - and we had none of those! But it had a top-notch cast and I was blown away by the energy of it.” Bates remembers that on the eve of its opening at the iconic Crucible Theatre in 2017 ticket sales had not been good. But that was the last time there was any question mark over the success of Everybody’s Talking About Jamie. “We hold a public dress rehearsal the day before every show opens and people can come and watch in return for a donation. You can tell the success of the show by the length of the queue in the morning and we had a big queue! As soon as the show finished the whole audience was on their feet. They told their friends, the reaction through social media and word of mouth was amazing.” Bates puts the success of the show down to its combination of being a great story told with energy about an underdog triumphing against the odds. “So many families came to see the show - it touched people’s hearts,” he says. The show’s West End success will transfer to the big screen later

this year with the release of a film. Sheffield-based Warp Films has teamed up with Film4 and New Regency to reunite the original creative team behind the stage production. Filmed in Sheffield and Doncaster, it features stars including Oscarnominated Richard E Grant, Sarah Lancashire, who won a BAFTA for Yorkshire-based TV series Happy Valley, as Jamie’s mother Margaret and BAFTA nominee Sharon Horgan as teacher Miss Hedge. The movie, which will be released worldwide via 20th Century Fox, sees newcomer Max Harwood take the title role of Jamie New. The 21-year-old from Basingstoke who is still studying at acting school, was chosen ahead of 3,000 who applied for the open casting call. Following a year’s search for Jamie’s classmates via regional casting calls, 20 young people from Yorkshire and the surrounding regions were cast. The film’s director Jonathan Butterell, writer Tom MacRae and composer Dan Gillespie Sells said: “Who would have thought when Jamie Campbell first put on his prom dress, that eight years later we would have brought together the best of British and Irish acting talent to tell his story.

“As well as launching a brand new star in Max Harwood to play Jamie himself, we’re so thrilled to welcome Sarah, Richard and Sharon to the Jamie family. Now the party’s really getting started.” Producer Mark Herbert from Warp Films added: “Warp Films are absolutely delighted that Richard, Sharon and Sarah are joining the Jamie family, and we are so excited that after nearly a year of searching we have found our Jamie New - we can’t wait to start this journey with Max and to share this film with the world.” Dan Bates is excited to see the film, which he believes delivers on several levels. “It has been huge, huge. It is a £17m production, that’s £17m coming into Yorkshire to develop this. “And they have really included that Sheffield community. There is a street party scene in the film and 4,000 people were invited to turn up without an audition! It makes me really proud for Sheffield.” He says the success of Everybody’s Talking About Jamie was the start of a more ambitious approach by Sheffield Theatres that has literally put it on the world stage. “If we could do a show of that scale then we knew we could do more - we have been bolder.”