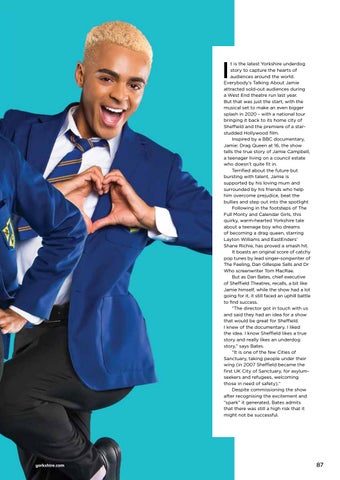 t is the latest Yorkshire underdog story to capture the hearts of audiences around the world. Everybody’s Talking About Jamie attracted sold-out audiences during a West End theatre run last year. But that was just the start, with the musical set to make an even bigger splash in 2020 - with a national tour bringing it back to its home city of Sheffield and the premiere of a starstudded Hollywood film. Inspired by a BBC documentary, Jamie: Drag Queen at 16, the show tells the true story of Jamie Campbell, a teenager living on a council estate who doesn’t quite fit in. Terrified about the future but bursting with talent, Jamie is supported by his loving mum and surrounded by his friends who help him overcome prejudice, beat the bullies and step out into the spotlight Following in the footsteps of The Full Monty and Calendar Girls, this quirky, warm-hearted Yorkshire tale about a teenage boy who dreams of becoming a drag queen, starring Layton Williams and EastEnders’ Shane Richie, has proved a smash hit. It boasts an original score of catchy pop tunes by lead singer-songwriter of The Feeling, Dan Gillespie Sells and Dr Who screenwriter Tom MacRae. But as Dan Bates, chief executive of Sheffield Theatres, recalls, a bit like Jamie himself, while the show had a lot going for it, it still faced an uphill battle to find success. “The director got in touch with us and said they had an idea for a show that would be great for Sheffield. I knew of the documentary. I liked the idea. I know Sheffield likes a true story and really likes an underdog story,” says Bates. “It is one of the few Cities of Sanctuary, taking people under their wing (in 2007 Sheffield became the first UK City of Sanctuary, for asylumseekers and refugees, welcoming those in need of safety).” Despite commissioning the show after recognising the excitement and “spark” it generated, Bates admits that there was still a high risk that it might not be successful.