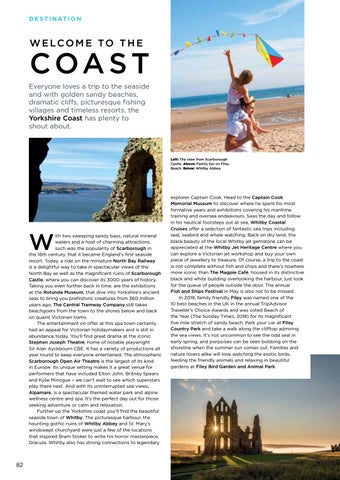 COAST Everyone loves a trip to the seaside and with golden sandy beaches, dramatic cliffs, picturesque fishing villages and timeless resorts, the Yorkshire Coast has plenty to shout about.

Left: The view from Scarborough Castle. Above: Family fun on Filey Beach. Below: Whitby Abbey.

ith two sweeping sandy bays, natural mineral waters and a host of charming attractions, such was the popularity of Scarborough in the 18th century, that it became England’s first seaside resort. Today, a ride on the miniature North Bay Railway is a delightful way to take in spectacular views of the North Bay as well as the magnificent ruins of Scarborough Castle, where you can discover its 3000 years of history. Taking you even further back in time, are the exhibitions at the Rotunda Museum, that dive into Yorkshire’s ancient seas to bring you prehistoric creatures from 360 million years ago. The Central Tramway Company still takes beachgoers from the town to the shores below and back on quaint Victorian trams. The entertainment on offer at this spa town certainly had an appeal for Victorian holidaymakers and is still in abundance today. You’ll find great drama at the iconic Stephen Joseph Theatre, home of notable playwright Sir Alan Ayckbourn CBE. It has a variety of productions all year round to keep everyone entertained. The atmospheric Scarborough Open Air Theatre is the largest of its kind in Europe. Its unique setting makes it a great venue for performers that have included Elton John, Britney Spears and Kylie Minogue – we can’t wait to see which superstars play there next. And with its uninterrupted sea views, Alpamare, is a spectacular themed water park and alpine wellness centre and spa. It’s the perfect day out for those seeking adventure or calm and relaxation. Further up the Yorkshire coast you’ll find the beautiful seaside town of Whitby. The picturesque harbour, the haunting gothic ruins of Whitby Abbey and St. Mary’s windswept churchyard were just a few of the locations that inspired Bram Stoker to write his horror masterpiece, Dracula. Whitby also has strong connections to legendary

explorer Captain Cook. Head to the Captain Cook Memorial Museum to discover where he spent his most formative years and exhibitions covering his maritime training and oversea endeavours. Seas the day and follow in his nautical footsteps out at sea, Whitby Coastal Cruises offer a selection of fantastic sea trips including seal, seabird and whale watching. Back on dry land, the black beauty of the local Whitby jet gemstone can be appreciated at the Whitby Jet Heritage Centre where you can explore a Victorian jet workshop and buy your own piece of jewellery to treasure. Of course, a trip to the coast is not complete without fish and chips and there’s nowhere more iconic than The Magpie Café, housed in its distinctive black and white building overlooking the harbour, just look for the queue of people outside the door. The annual Fish and Ships Festival in May is also not to be missed. In 2019, family friendly Filey was named one of the 10 best beaches in the UK in the annual TripAdvisor Traveller’s Choice Awards and was voted Beach of the Year (The Sunday Times, 2018) for its magnificent five mile stretch of sandy beach. Park your car at Filey Country Park and take a walk along the clifftop admiring the sea views. It’s not uncommon to see the odd seal in early spring, and porpoises can be seen bobbing on the shoreline when the summer sun comes out. Families and nature lovers alike will love watching the exotic birds, feeding the friendly animals and relaxing in beautiful gardens at Filey Bird Garden and Animal Park.