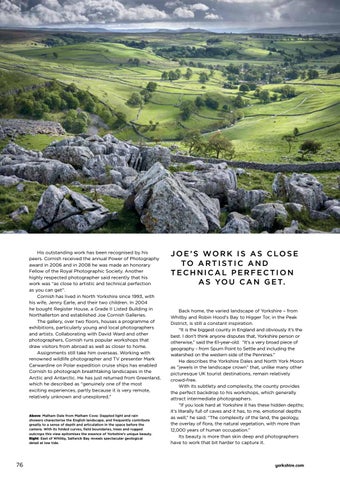 His outstanding work has been recognised by his peers. Cornish received the annual Power of Photography award in 2006 and in 2008 he was made an honorary Fellow of the Royal Photographic Society. Another highly respected photographer said recently that his work was “as close to artistic and technical perfection as you can get”. Cornish has lived in North Yorkshire since 1993, with his wife, Jenny Earle, and their two children. In 2004 he bought Register House, a Grade II Listed Building in Northallerton and established Joe Cornish Galleries. The gallery, over two floors, houses a programme of exhibitions, particularly young and local photographers and artists. Collaborating with David Ward and other photographers, Cornish runs popular workshops that draw visitors from abroad as well as closer to home. Assignments still take him overseas. Working with renowned wildlife photographer and TV presenter Mark Carwardine on Polar expedition cruise ships has enabled Cornish to photograph breathtaking landscapes in the Arctic and Antarctic. He has just returned from Greenland, which he described as “genuinely one of the most exciting experiences, partly because it is very remote, relatively unknown and unexplored.”

Above: Malham Dale from Malham Cove: Dappled light and rain showers characterise the English landscape, and frequently contribute greatly to a sense of depth and articulation in the space before the camera. With its folded curves, field boundaries, trees and rugged outcrops this view epitomises the essence of Yorkshire’s unique beauty. Right: East of Whitby, Saltwick Bay reveals spectacular geological detail at low tide.

Back home, the varied landscape of Yorkshire – from Whitby and Robin Hood’s Bay to Higger Tor, in the Peak District, is still a constant inspiration. “It is the biggest county in England and obviously it’s the best. I don’t think anyone disputes that, Yorkshire person or otherwise,” said the 61-year-old. “It’s a very broad piece of geography - from Spurn Point to Settle and including the watershed on the western side of the Pennines.” He describes the Yorkshire Dales and North York Moors as ”jewels in the landscape crown” that, unlike many other picturesque UK tourist destinations, remain relatively crowd-free. With its subtlety and complexity, the county provides the perfect backdrop to his workshops, which generally attract intermediate photographers. “If you look hard at Yorkshire it has these hidden depths; it’s literally full of caves and it has, to me, emotional depths as well,” he said. “The complexity of the land, the geology, the overlay of flora, the natural vegetation, with more than 12,000 years of human occupation.” Its beauty is more than skin deep and photographers have to work that bit harder to capture it.