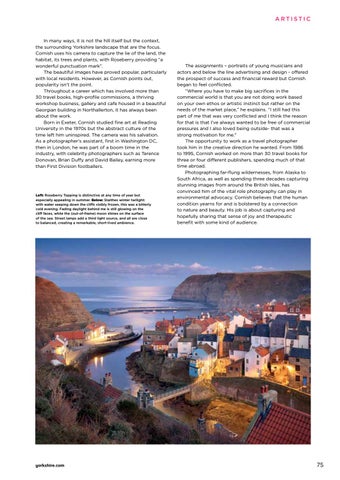 In many ways, it is not the hill itself but the context, the surrounding Yorkshire landscape that are the focus. Cornish uses his camera to capture the lie of the land, the habitat, its trees and plants, with Roseberry providing “a wonderful punctuation mark”. The beautiful images have proved popular, particularly with local residents. However, as Cornish points out, popularity isn’t the point. Throughout a career which has involved more than 30 travel books, high-profile commissions, a thriving workshop business, gallery and cafe housed in a beautiful Georgian building in Northallerton, it has always been about the work. Born in Exeter, Cornish studied fine art at Reading University in the 1970s but the abstract culture of the time left him uninspired. The camera was his salvation. As a photographer’s assistant, first in Washington DC, then in London, he was part of a boom time in the industry, with celebrity photographers such as Terence Donovan, Brian Duffy and David Bailey, earning more than First Division footballers.

Left: Roseberry Topping is distinctive at any time of year but especially appealing in summer. Below: Staithes winter twilight: with water seeping down the cliffs visibly frozen, this was a bitterly cold evening. Fading daylight behind me is still glowing on the cliff faces, while the (out-of-frame) moon shines on the surface of the sea. Street lamps add a third light source, and all are close to balanced, creating a remarkable, short-lived ambience.

The assignments – portraits of young musicians and actors and below the line advertising and design - offered the prospect of success and financial reward but Cornish began to feel conflicted. “Where you have to make big sacrifices in the commercial world is that you are not doing work based on your own ethos or artistic instinct but rather on the needs of the market place,” he explains. “I still had this part of me that was very conflicted and I think the reason for that is that I’ve always wanted to be free of commercial pressures and I also loved being outside- that was a strong motivation for me.” The opportunity to work as a travel photographer took him in the creative direction he wanted. From 1986 to 1995, Cornish worked on more than 30 travel books for three or four different publishers, spending much of that time abroad. Photographing far-flung wildernesses, from Alaska to South Africa, as well as spending three decades capturing stunning images from around the British Isles, has convinced him of the vital role photography can play in environmental advocacy. Cornish believes that the human condition yearns for and is bolstered by a connection to nature and beauty. His job is about capturing and hopefully sharing that sense of joy and therapeutic benefit with some kind of audience.