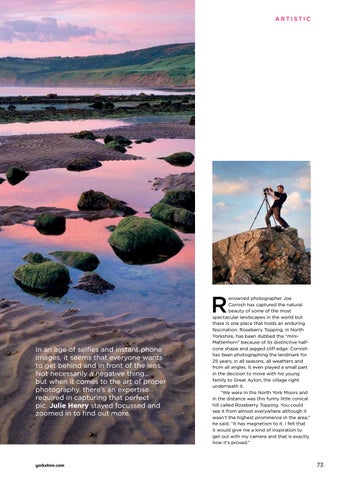 R   In an age of selfies and instant phone images, it seems that everyone wants to get behind and in front of the lens. Not necessarily a negative thing... but when it comes to the art of proper photography, there’s an expertise required in capturing that perfect pic. Julie Henry stayed focussed and zoomed in to find out more.

enowned photographer Joe Cornish has captured the natural beauty of some of the most spectacular landscapes in the world but there is one place that holds an enduring fascination. Roseberry Topping, in North Yorkshire, has been dubbed the “miniMatterhorn” because of its distinctive halfcone shape and jagged cliff edge. Cornish has been photographing the landmark for 25 years; in all seasons, all weathers and from all angles. It even played a small part in the decision to move with his young family to Great Ayton, the village right underneath it. “We were in the North York Moors and in the distance was this funny little conical hill called Roseberry Topping. You could see it from almost everywhere although it wasn’t the highest prominence in the area,” he said. “It has magnetism to it. I felt that it would give me a kind of inspiration to get out with my camera and that is exactly how it’s proved.”