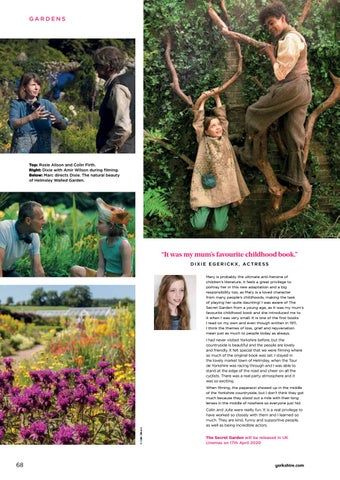 “It was my mum’s favourite childhood book.” D I X I E E G E R I C K X , AC T R E S S Mary is probably the ultimate anti-heroine of children’s literature, it feels a great privilege to portray her in this new adaptation and a big responsibility too, as Mary is a loved character from many people’s childhoods, making the task of playing her quite daunting! I was aware of The Secret Garden from a young age, as it was my mum’s favourite childhood book and she introduced me to it when I was very small. It is one of the first books I read on my own and even though written in 1911, I think the themes of loss, grief and rejuvenation mean just as much to people today as always. I had never visited Yorkshire before, but the countryside is beautiful and the people are lovely and friendly. It felt special that we were filming where so much of the original book was set. I stayed in the lovely market town of Helmsley, when the Tour de Yorkshire was racing through and I was able to stand at the edge of the road and cheer on all the cyclists. There was a real party atmosphere and it was so exciting.

When filming, the paparazzi showed up in the middle of the Yorkshire countryside, but I don’t think they got much because they stood out a mile with their long lenses in the middle of nowhere so everyone just hid.

Colin and Julie were really fun. It is a real privilege to have worked so closely with them and I learned so much. They are kind, funny and supportive people, as well as being incredible actors.