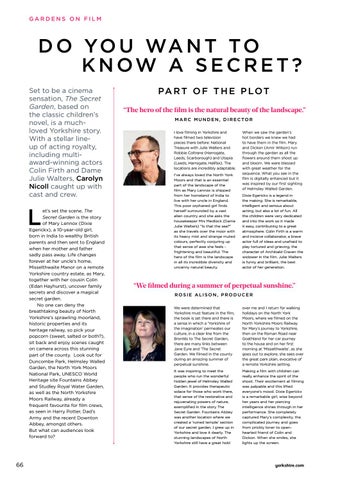 D O YO U WA N T T O K N OW A S E C R E T ? Set to be a cinema sensation, The Secret Garden, based on the classic children’s novel, is a muchloved Yorkshire story. With a stellar lineup of acting royalty, including multiaward-winning actors Colin Firth and Dame Julie Walters, Carolyn Nicoll caught up with cast and crew.

et’s set the scene, The Secret Garden is the story of Mary Lennox (Dixie Egerickx), a 10-year-old girl, born in India to wealthy British parents and then sent to England when her mother and father sadly pass away. Life changes forever at her uncle’s home, Misselthwaite Manor on a remote Yorkshire country estate, as Mary, together with her cousin Colin (Edan Hayhurst), uncover family secrets and discover a magical secret garden. No one can deny the breathtaking beauty of North Yorkshire’s sprawling moorland, historic properties and its heritage railway, so pick your popcorn (sweet, salted or both?), sit back and enjoy scenes caught on camera across this stunning part of the county. Look out for Duncombe Park, Helmsley Walled Garden, the North York Moors National Park, UNESCO World Heritage site Fountains Abbey and Studley Royal Water Garden, as well as the North Yorkshire Moors Railway, already a frequent favourite for film crews, as seen in Harry Potter, Dad’s Army and the recent Downton Abbey, amongst others. But what can audiences look forward to?

PA R T O F T H E P L O T “The hero of the film is the natural beauty of the landscape.” M A R C M U N D E N , D I R E C TO R I love filming in Yorkshire and have filmed two television pieces there before: National Treasure with Julie Walters and Robbie Coltrane (Harrogate, Leeds, Scarborough) and Utopia (Leeds, Harrogate, Halifax). The locations are incredibly adaptable. I’ve always loved the North York Moors and that is an essential part of the landscape of the film as Mary Lennox is shipped from her homeland of India to live with her uncle in England. This poor orphaned girl finds herself surrounded by a vast alien country and she asks the housekeeper Mrs Medlock (Dame Julie Walters) “Is that the sea?” as she travels over the moor with its heavy mist and strange muted colours, perfectly conjuring up that sense of awe she feels frightening and beautiful. The hero of the film is the landscape in all its incredible diversity and uncanny natural beauty.

When we saw the garden’s hot borders we knew we had to have them in the film. Mary and Dickon (Amir Wilson) run through the garden as all the flowers around them shoot up and bloom. We were blessed with great weather for the sequence. What you see in the film is digitally enhanced but it was inspired by our first sighting of Helmsley Walled Garden. Dixie Egerickx is a legend in the making. She is remarkable, intelligent and serious about acting, but also a lot of fun. All the children were very dedicated and into the work so it made it easy, contributing to a great atmosphere. Colin Firth is a warm and incisive collaborator, a brave actor full of ideas and unafraid to play tortured and grieving, the character of Archibald Craven the widower in the film. Julie Walters is funny and brilliant, the best actor of her generation.

“We filmed during a summer of perpetual sunshine.” ROSIE ALISON, PRODUCER We were determined that Yorkshire must feature in the film, the book is set there and there is a sense in which a ‘Yorkshire of the imagination’ permeates our culture, in a clear line from the Brontës to The Secret Garden, there are many links between Jane Eyre and ’The Secret Garden. We filmed in the county during an amazing summer of perpetual sunshine.

over me and I return for walking holidays on the North York Moors, where we filmed on the North Yorkshire Moors Railway for Mary’s journey to Yorkshire, then on the Roman Road near Goathland for her car journey to the house and on her first morning at ‘Misselthwaite’, as she goes out to explore, she sees over the great park plain, evocative of a remote Yorkshire setting.

It was inspiring to meet the people who run the wonderful hidden jewel of Helmsley Walled Garden. It provides therapeutic solace for those who work there, that sense of the restorative and rejuvenating powers of nature, exemplified in the story The Secret Garden. Fountains Abbey was another location where we created a ‘ruined temple’ section of our secret garden. I grew up in Yorkshire and love it dearly. The stunning landscapes of North Yorkshire still have a great hold

Making a film with children can really enhance the spirit of the shoot. Their excitement at filming was palpable and this lifted everyone’s mood. Dixie Egerickx is a remarkable girl, wise beyond her years and her piercing intelligence shines through in her performance. She completely captured Mary’s complexity, the complicated journey and goes from prickly loner to openhearted friend of Colin and Dickon. When she smiles, she lights up the screen.