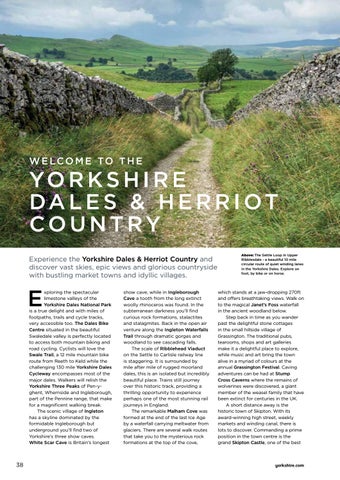 xploring the spectacular limestone valleys of the Yorkshire Dales National Park is a true delight and with miles of footpaths, trails and cycle tracks, very accessible too. The Dales Bike Centre situated in the beautiful Swaledale valley is perfectly located to access both mountain biking and road cycling. Cyclists will love the Swale Trail, a 12 mile mountain bike route from Reeth to Keld while the challenging 130 mile Yorkshire Dales Cycleway encompasses most of the major dales. Walkers will relish the Yorkshire Three Peaks of Pen-yghent, Whernside and Ingleborough, part of the Pennine range, that make for a magnificent walking break. The scenic village of Ingleton has a skyline dominated by the formidable Ingleborough but underground you’ll find two of Yorkshire’s three show caves. White Scar Cave is Britain’s longest

show cave, while in Ingleborough Cave a tooth from the long extinct woolly rhinoceros was found. In the subterranean darkness you’ll find curious rock formations, stalactites and stalagmites. Back in the open air venture along the Ingleton Waterfalls Trail through dramatic gorges and woodland to see cascading falls. The scale of Ribblehead Viaduct on the Settle to Carlisle railway line is staggering. It is surrounded by mile after mile of rugged moorland dales, this is an isolated but incredibly beautiful place. Trains still journey over this historic track, providing a thrilling opportunity to experience perhaps one of the most stunning rail journeys in England. The remarkable Malham Cove was formed at the end of the last Ice Age by a waterfall carrying meltwater from glaciers. There are several walk routes that take you to the mysterious rock formations at the top of the cove,

Above: The Settle Loop in Upper Ribblesdale - a beautiful 10 mile circular route of quiet winding lanes in the Yorkshire Dales. Explore on foot, by bike or on horse.

which stands at a jaw-dropping 270ft and offers breathtaking views. Walk on to the magical Janet’s Foss waterfall in the ancient woodland below. Step back in time as you wander past the delightful stone cottages in the small hillside village of Grassington. The traditional pubs, tearooms, shops and art galleries make it a delightful place to explore, while music and art bring the town alive in a myriad of colours at the annual Grassington Festival. Caving adventures can be had at Stump Cross Caverns where the remains of wolverines were discovered, a giant member of the weasel family that have been extinct for centuries in the UK. A short distance away is the historic town of Skipton. With its award-winning high street, weekly markets and winding canal, there is lots to discover. Commanding a prime position in the town centre is the grand Skipton Castle, one of the best