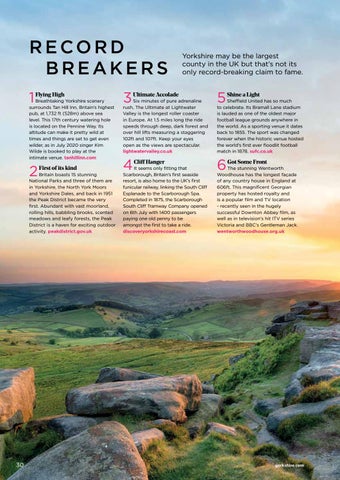 Breathtaking Yorkshire scenery surrounds Tan Hill Inn, Britain’s highest pub, at 1,732 ft (528m) above sea level. This 17th century watering hole is located on the Pennine Way. Its altitude can make it pretty wild at times and things are set to get even wilder, as in July 2020 singer Kim Wilde is booked to play at the intimate venue. tanhillinn.com

First of its kind

Britain boasts 15 stunning National Parks and three of them are in Yorkshire, the North York Moors and Yorkshire Dales, and back in 1951 the Peak District became the very first. Abundant with vast moorland, rolling hills, babbling brooks, scented meadows and leafy forests, the Peak District is a haven for exciting outdoor activity. peakdistrict.gov.uk

Yorkshire may be the largest county in the UK but that’s not its only record-breaking claim to fame.

Six minutes of pure adrenaline rush, The Ultimate at Lightwater Valley is the longest roller coaster in Europe. At 1.5 miles long the ride speeds through deep, dark forest and over hill lifts measuring a staggering 102ft and 107ft. Keep your eyes open as the views are spectacular. lightwatervalley.co.uk

It seems only fitting that Scarborough, Britain’s first seaside resort, is also home to the UK’s first funicular railway, linking the South Cliff Esplanade to the Scarborough Spa. Completed in 1875, the Scarborough South Cliff Tramway Company opened on 6th July with 1400 passengers paying one old penny to be amongst the first to take a ride. discoveryorkshirecoast.com

Sheffield United has so much to celebrate. Its Bramall Lane stadium is lauded as one of the oldest major football league grounds anywhere in the world. As a sporting venue it dates back to 1855. The sport was changed forever when the historic venue hosted the world’s first ever floodlit football match in 1878. sufc.co.uk

The stunning Wentworth Woodhouse has the longest façade of any country house in England at 606ft. This magnificent Georgian property has hosted royalty and is a popular film and TV location - recently seen in the hugely successful Downton Abbey film, as well as in television’s hit ITV series Victoria and BBC’s Gentleman Jack. wentworthwoodhouse.org.uk