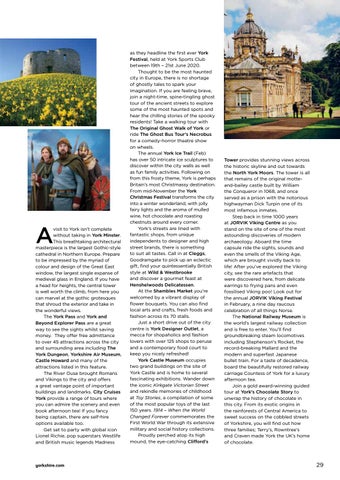 visit to York isn’t complete without taking in York Minster. This breathtaking architectural masterpiece is the largest Gothic-style cathedral in Northern Europe. Prepare to be impressed by the myriad of colour and design of the Great East window, the largest single expanse of medieval glass in England. If you have a head for heights, the central tower is well worth the climb, from here you can marvel at the gothic grotesques that shroud the exterior and take in the wonderful views. The York Pass and York and Beyond Explorer Pass are a great way to see the sights whilst saving money. They offer free admittance to over 45 attractions across the city and surrounding area including The York Dungeon, Yorkshire Air Museum, Castle Howard and many of the attractions listed in this feature. The River Ouse brought Romans and Vikings to the city and offers a great vantage point of important buildings and landmarks. City Cruises York provide a range of tours where you can admire the scenery and even book afternoon tea! If you fancy being captain, there are self-hire options available too. Get set to party with global icon Lionel Richie, pop superstars Westlife and British music legends Madness

as they headline the first ever York Festival, held at York Sports Club between 19th – 21st June 2020. Thought to be the most haunted city in Europe, there is no shortage of ghostly tales to spark your imagination. If you are feeling brave, join a night-time, spine-tingling ghost tour of the ancient streets to explore some of the most haunted spots and hear the chilling stories of the spooky residents! Take a walking tour with The Original Ghost Walk of York or ride The Ghost Bus Tour’s Necrobus for a comedy-horror theatre show on wheels. The annual York Ice Trail (Feb) has over 50 intricate ice sculptures to discover within the city walls as well as fun family activities. Following on from this frosty theme, York is perhaps Britain’s most Christmassy destination. From mid-November the York Christmas Festival transforms the city into a winter wonderland, with jolly fairy lights and the aroma of mulled wine, hot chocolate and roasting chestnuts around every corner. York’s streets are lined with fantastic shops, from unique independents to designer and high street brands, there is something to suit all tastes. Call in at Cleggs, Goodramgate to pick up an eclectic gift, find your quintessentially British style at Wild &amp; Westbrooke and discover a gourmet feast at Henshelwoods Delicatessen. At the Shambles Market you’re welcomed by a vibrant display of flower bouquets. You can also find local arts and crafts, fresh foods and fashion across its 70 stalls. Just a short drive out of the city centre is York Designer Outlet, a mecca for shopaholics and fashion lovers with over 125 shops to peruse and a contemporary food court to keep you nicely refreshed! York Castle Museum occupies two grand buildings on the site of York Castle and is home to several fascinating exhibitions. Wander down the iconic Kirkgate Victorian Street and rekindle memories of childhood at Toy Stories, a compilation of some of the most popular toys of the last 150 years. 1914 – When the World Changed Forever commemorates the First World War through its extensive military and social history collections. Proudly perched atop its high mound, the eye-catching Clifford’s

Tower provides stunning views across the historic skyline and out towards the North York Moors. The tower is all that remains of the original motteand-bailey castle built by William the Conqueror in 1068, and once served as a prison with the notorious highwayman Dick Turpin one of its most infamous inmates. Step back in time 1000 years at JORVIK Viking Centre as you stand on the site of one of the most astounding discoveries of modern archaeology. Aboard the time capsule ride the sights, sounds and even the smells of the Viking Age, which are brought vividly back to life! After you’ve explored the Viking city, see the rare artefacts that were discovered here, from delicate earrings to frying pans and even fossilised Viking poo! Look out for the annual JORVIK Viking Festival in February, a nine day raucous celebration of all things Norse. The National Railway Museum is the world’s largest railway collection and is free to enter. You’ll find groundbreaking steam locomotives including Stephenson’s Rocket, the record-breaking Mallard and the modern and superfast Japanese bullet train. For a taste of decadence, board the beautifully restored railway carriage Countess of York for a luxury afternoon tea. Join a gold award-winning guided tour at York’s Chocolate Story to unwrap the history of chocolate in this city. From its exotic origins in the rainforests of Central America to sweet success on the cobbled streets of Yorkshire, you will find out how three families; Terry’s, Rowntree’s and Craven made York the UK’s home of chocolate.