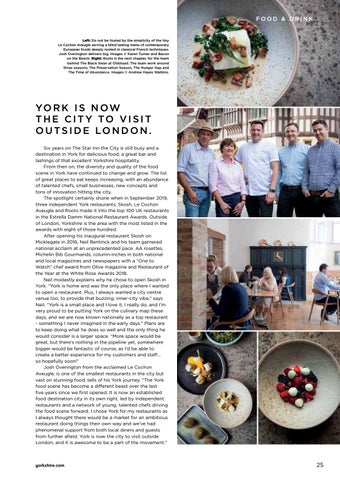 Left: Do not be fooled by the simplicity of the tiny Le Cochon Aveugle serving a blind tasting menu of contemporary European foods deeply rooted in classical French techniques. Josh Overington delivers big. Images © Karen Turner and Bacon on the Beech. Right: Roots is the next chapter, for the team behind The Black Swan at Oldstead. The team work around three seasons; The Preservation Season, The Hunger Gap and The Time of Abundance. Images © Andrew Hayes Watkins.

YO R K I S N O W T H E C I T Y TO V I S I T O U TS I D E LO N D O N . Six years on The Star Inn the City is still busy and a destination in York for delicious food, a great bar and lashings of that excellent Yorkshire hospitality. From then on, the diversity and quality of the food scene in York have continued to change and grow. The list of great places to eat keeps increasing, with an abundance of talented chefs, small businesses, new concepts and tons of innovation hitting the city. The spotlight certainly shone when in September 2019, three independent York restaurants, Skosh, Le Cochon Aveugle and Roots made it into the top 100 UK restaurants in the Estrella Damm National Restaurant Awards. Outside of London, Yorkshire is the area with the most listed in the awards with eight of those hundred. After opening his inaugural restaurant Skosh on Micklegate in 2016, Neil Bentinck and his team garnered national acclaim at an unprecedented pace. AA rosettes, Michelin Bib Gourmands, column-inches in both national and local magazines and newspapers with a “One to Watch” chef award from Olive magazine and Restaurant of the Year at the White Rose Awards 2018. Neil modestly explains why he chose to open Skosh in York. “York is home and was the only place where I wanted to open a restaurant. Plus, I always wanted a city centre venue too, to provide that buzzing, inner-city vibe,” says Neil. “York is a small place and I love it, I really do, and I’m very proud to be putting York on the culinary map these days, and we are now known nationally as a top restaurant - something I never imagined in the early days.” Plans are to keep doing what he does so well and the only thing he would consider is a larger space. “More space would be great, but there’s nothing in the pipeline yet, somewhere bigger would be fantastic of course, as I’d be able to create a better experience for my customers and staff... so hopefully soon!” Josh Overington from the acclaimed Le Cochon Aveugle, is one of the smallest restaurants in the city but vast on stunning food, tells of his York journey. “The York food scene has become a different beast over the last five years since we first opened. It is now an established food destination city in its own right, led by independent restaurants and a network of young, talented chefs driving the food scene forward. I chose York for my restaurants as I always thought there would be a market for an ambitious restaurant doing things their own way and we’ve had phenomenal support from both local diners and guests from further afield. York is now the city to visit outside London, and it is awesome to be a part of the movement.”