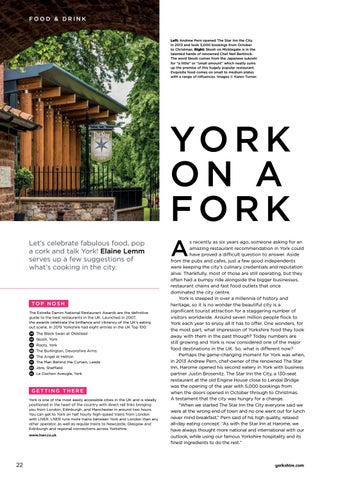 Left: Andrew Pern opened The Star Inn the City in 2013 and took 5,000 bookings from October to Christmas. Right: Skosh on Micklegate is in the talented hands of renowned Chef Neil Bentinck. The word Skosh comes from the Japanese sukoshi for “a little” or “small amount” which neatly sums up the premise of this hugely popular restaurant. Exquisite food comes on small to medium plates with a range of influences. Images © Karen Turner.

YO R K ON A FORK Let’s celebrate fabulous food, pop a cork and talk York! Elaine Lemm serves up a few suggestions of what’s cooking in the city.

TO P N OS H The Estrella Damm National Restaurant Awards are the definitive guide to the best restaurants in the UK. Launched in 2007, the awards celebrate the brilliance and vibrancy of the UK’s eating out scene. In 2019 Yorkshire had eight entries in the UK Top 100: 29

The Black Swan at Oldstead

The Angel at Hetton

The Man Behind the Curtain, Leeds

GETTING THERE York is one of the most easily accessible cities in the UK and is ideally positioned in the heart of the country with direct rail links bringing you from London, Edinburgh, and Manchester in around two hours. You can get to York on half hourly high-speed trains from London with LNER. LNER runs more trains between York and London than any other operator, as well as regular trains to Newcastle, Glasgow and Edinburgh and regional connections across Yorkshire. www.lner.co.uk

s recently as six years ago, someone asking for an amazing restaurant recommendation in York could have proved a difficult question to answer. Aside from the pubs and cafes, just a few good independents were keeping the city’s culinary credentials and reputation alive. Thankfully, most of those are still operating, but they often had a bumpy ride alongside the bigger businesses, restaurant chains and fast food outlets that once dominated the city centre. York is steeped in over a millennia of history and heritage, so it is no wonder the beautiful city is a significant tourist attraction for a staggering number of visitors worldwide. Around seven million people flock to York each year to enjoy all it has to offer. One wonders, for the most part, what impression of Yorkshire food they took away with them in the past though? Today numbers are still growing and York is now considered one of the major food destinations in the UK. So, what is different now? Perhaps the game-changing moment for York was when, in 2013 Andrew Pern, chef-owner of the renowned The Star Inn, Harome opened his second eatery in York with business partner Justin Brosenitz. The Star Inn the City, a 130-seat restaurant at the old Engine House close to Lendal Bridge was the opening of the year with 5,000 bookings from when the doors opened in October through to Christmas. A testament that the city was hungry for a change. “When we started The Star Inn the City everyone said we were at the wrong end of town and no one went out for lunch never mind breakfast,” Pern said of his high quality, relaxed all-day eating concept. “As with the Star Inn at Harome, we have always thought more national and international with our outlook, while using our famous Yorkshire hospitality and its finest ingredients to do the rest.”