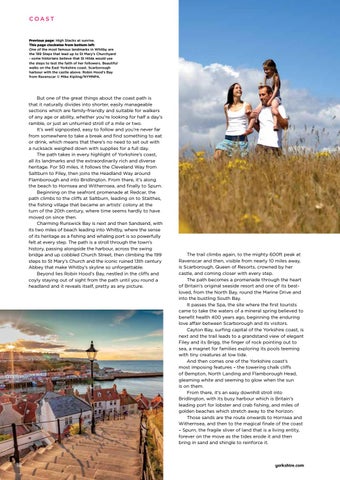 Previous page: High Stacks at sunrise. This page clockwise from bottom left: One of the most famous landmarks in Whitby are the 199 Steps that lead up to St Mary’s Churchyard - some historians believe that St Hilda would use the steps to test the faith of her followers. Beautiful walks on the East Yorkshire coast. Scarborough harbour with the castle above. Robin Hood’s Bay from Ravenscar © Mike Kipling/NYMNPA.

But one of the great things about the coast path is that it naturally divides into shorter, easily manageable sections which are family-friendly and suitable for walkers of any age or ability, whether you’re looking for half a day’s ramble, or just an unhurried stroll of a mile or two. It’s well signposted, easy to follow and you’re never far from somewhere to take a break and find something to eat or drink, which means that there’s no need to set out with a rucksack weighed down with supplies for a full day. The path takes in every highlight of Yorkshire’s coast, all its landmarks and the extraordinarily rich and diverse heritage. For 50 miles, it follows the Cleveland Way from Saltburn to Filey, then joins the Headland Way around Flamborough and into Bridlington. From there, it’s along the beach to Hornsea and Withernsea, and finally to Spurn. Beginning on the seafront promenade at Redcar, the path climbs to the cliffs at Saltburn, leading on to Staithes, the fishing village that became an artists’ colony at the turn of the 20th century, where time seems hardly to have moved on since then. Charming Runswick Bay is next and then Sandsend, with its two miles of beach leading into Whitby, where the sense of its heritage as a fishing and whaling port is so powerfully felt at every step. The path is a stroll through the town’s history, passing alongside the harbour, across the swing bridge and up cobbled Church Street, then climbing the 199 steps to St Mary’s Church and the iconic ruined 13th century Abbey that make Whitby’s skyline so unforgettable. Beyond lies Robin Hood’s Bay, nestled in the cliffs and coyly staying out of sight from the path until you round a headland and it reveals itself, pretty as any picture.

The trail climbs again, to the mighty 600ft peak at Ravenscar and then, visible from nearly 10 miles away, is Scarborough, Queen of Resorts, crowned by her castle, and coming closer with every step. The path becomes a promenade through the heart of Britain’s original seaside resort and one of its bestloved, from the North Bay, round the Marine Drive and into the bustling South Bay. It passes the Spa, the site where the first tourists came to take the waters of a mineral spring believed to benefit health 400 years ago, beginning the enduring love affair between Scarborough and its visitors. Cayton Bay, surfing capital of the Yorkshire coast, is next and the trail leads to a grandstand view of elegant Filey and its Brigg, the finger of rock pointing out to sea, a magnet for families exploring its pools teeming with tiny creatures at low tide. And then comes one of the Yorkshire coast’s most imposing features – the towering chalk cliffs of Bempton, North Landing and Flamborough Head, gleaming white and seeming to glow when the sun is on them. From there, it’s an easy downhill stroll into Bridlington, with its busy harbour which is Britain’s leading port for lobster and crab fishing, and miles of golden beaches which stretch away to the horizon. Those sands are the route onwards to Hornsea and Withernsea, and then to the magical finale of the coast – Spurn, the fragile sliver of land that is a living entity, forever on the move as the tides erode it and then bring in sand and shingle to reinforce it.