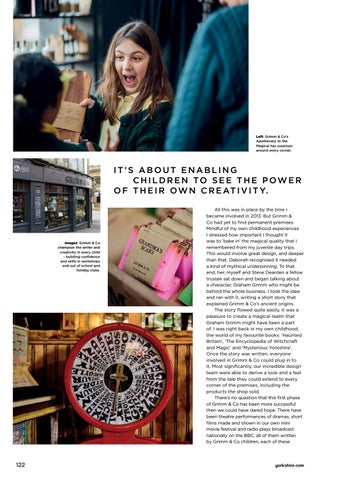 Left: Grimm &amp; Co’s Apothecary to the Magical has surprises around every corner.

Images: Grimm &amp; Co champion the writer and creativity in every child - building confidence and skills in workshops and out of school and holiday clubs.

All this was in place by the time I became involved in 2013. But Grimm &amp; Co had yet to find permanent premises. Mindful of my own childhood experiences I stressed how important I thought it was to ‘bake in’ the magical quality that I remembered from my juvenile day trips. This would involve great design, and deeper than that, Deborah recognised it needed a kind of mythical underpinning. To that end, her, myself and Steve Dearden a fellow trustee sat down and began talking about a character, Graham Grimm who might be behind the whole business. I took the idea and ran with it, writing a short story that explained Grimm &amp; Co’s ancient origins. The story flowed quite easily, it was a pleasure to create a magical realm that Graham Grimm might have been a part of. I was right back in my own childhood, the world of my favourite books: ‘Haunted Britain’, ‘The Encyclopedia of Witchcraft and Magic’ and ‘Mysterious Yorkshire’. Once the story was written, everyone involved in Grimm &amp; Co could plug in to it. Most significantly, our incredible design team were able to derive a look and a feel from the tale they could extend to every corner of the premises, including the products the shop sold. There’s no question that this first phase of Grimm &amp; Co has been more successful then we could have dared hope. There have been theatre performances of dramas, short films made and shown in our own mini movie festival and radio plays broadcast nationally on the BBC, all of them written by Grimm &amp; Co children, each of these