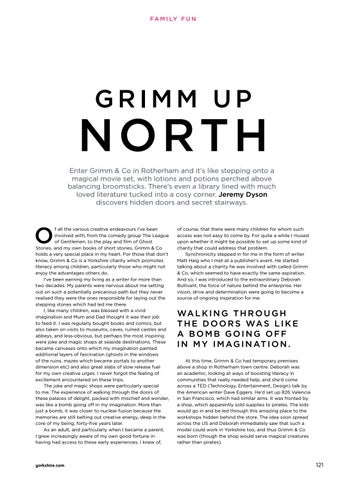 NO RT H Enter Grimm & Co in Rotherham and it’s like stepping onto a magical movie set, with lotions and potions perched above balancing broomsticks. There’s even a library lined with much loved literature tucked into a cosy corner. Jeremy Dyson discovers hidden doors and secret stairways.

f all the various creative endeavours I’ve been involved with, from the comedy group The League of Gentlemen, to the play and film of Ghost Stories, and my own books of short stories, Grimm & Co holds a very special place in my heart. For those that don’t know, Grimm & Co is a Yorkshire charity which promotes literacy among children, particularly those who might not enjoy the advantages others do. I’ve been earning my living as a writer for more than two decades. My parents were nervous about me setting out on such a potentially precarious path but they never realised they were the ones responsible for laying out the stepping stones which had led me there. I, like many children, was blessed with a vivid imagination and Mum and Dad thought it was their job to feed it. I was regularly bought books and comics, but also taken on visits to museums, caves, ruined castles and abbeys, and less-obvious, but perhaps the most inspiring were joke and magic shops at seaside destinations. These became canvases onto which my imagination painted additional layers of fascination (ghosts in the windows of the ruins, mazes which became portals to another dimension etc) and also great slabs of slow release fuel for my own creative urges. I never forgot the feeling of excitement encountered on these trips. The joke and magic shops were particularly special to me. The experience of walking through the doors of these palaces of delight, packed with mischief and wonder, was like a bomb going off in my imagination. More than just a bomb, it was closer to nuclear fusion because the memories are still belting out creative energy, deep in the core of my being, forty-five years later. As an adult, and particularly when I became a parent, I grew increasingly aware of my own good fortune in having had access to these early experiences. I knew of,

of course, that there were many children for whom such access was not easy to come by. For quite a while I mused upon whether it might be possible to set up some kind of charity that could address that problem. Synchronicity stepped in for me in the form of writer Matt Haig who I met at a publisher’s event. He started talking about a charity he was involved with called Grimm & Co, which seemed to have exactly the same aspiration. And so, I was introduced to the extraordinary Deborah Bullivant, the force of nature behind the enterprise. Her vision, drive and determination were going to become a source of ongoing inspiration for me.

WA L K I N G T H R O U G H T H E D O O R S WA S L I K E A BOMB GOING OFF I N M Y I M A G I N AT I O N . At this time, Grimm & Co had temporary premises above a shop in Rotherham town centre. Deborah was an academic, looking at ways of boosting literacy in communities that really needed help, and she’d come across a TED (Technology, Entertainment, Design) talk by the American writer Dave Eggers. He’d set up 826 Valencia in San Francisco, which had similar aims. It was fronted by a shop, which apparently sold supplies to pirates. The kids would go in and be led through this amazing place to the workshops hidden behind the store. The idea soon spread across the US and Deborah immediately saw that such a model could work in Yorkshire too, and thus Grimm & Co was born (though the shop would serve magical creatures rather than pirates).

Welcome to This is Y 2020. Ask anyone what they love about Yorkshire and they’re more than likely to not only mention the stunning countrys...

Welcome to This is Y 2020. Ask anyone what they love about Yorkshire and they’re more than likely to not only mention the stunning countrys...