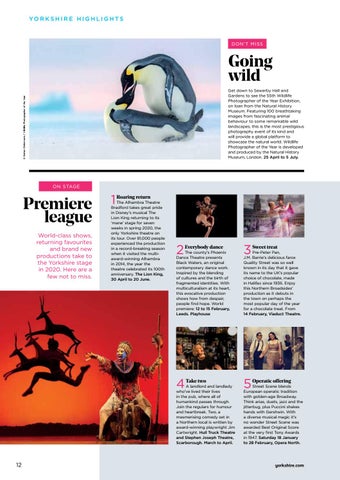 Get down to Sewerby Hall and Gardens to see the 55th Wildlife Photographer of the Year Exhibition, on loan from the Natural History Museum. Featuring 100 breathtaking images from fascinating animal behaviour to some remarkable wild landscapes, this is the most prestigious photography event of its kind and will provide a global platform to showcase the natural world. Wildlife Photographer of the Year is developed and produced by the Natural History Museum, London. 25 April to 5 July.

Premiere league World-class shows, returning favourites and brand new productions take to the Yorkshire stage in 2020. Here are a few not to miss.

The Alhambra Theatre Bradford takes great pride in Disney’s musical The Lion King returning to its ‘mane’ stage for seven weeks in spring 2020, the only Yorkshire theatre on its tour. Over 81,000 people experienced the production in a record-breaking season when it visited the multiaward-winning Alhambra in 2014, the year the theatre celebrated its 100th anniversary. The Lion King, 30 April to 20 June.

The county’s Phoenix Dance Theatre presents Black Waters, an original contemporary dance work. Inspired by the blending of cultures and the birth of fragmented identities. With multiculturalism at its heart, this evocative production shows how from despair, people find hope. World premiere: 12 to 15 February, Leeds. Playhouse

Pre-Peter Pan, J.M. Barrie’s delicious farce Quality Street was so well known in its day that it gave its name to the UK’s popular choice of chocolate, made in Halifax since 1936. Enjoy this Northern Broadsides’ production as it debuts in the town on perhaps the most popular day of the year for a chocolate treat. From 14 February, Viaduct Theatre.

A landlord and landlady who’ve lived their lives in the pub, where all of humankind passes through. Join the regulars for humour and heartbreak. Two, a mesmerising comedy set in a Northern local is written by award-winning playwright Jim Cartwright. Hull Truck Theatre and Stephen Joseph Theatre, Scarborough. March to April.